In this big wide world of epic, delicious Chinese cuisine, it can be hard to pick favorites. From dumplings to stir-fries, the ever-varied assortment of regional delicacies and price points could keep us eating well, and excessively, for a lifetime. But no matter your inclinations, it’s impossible to deny the power of the humble noodle. Hand-stretched into submission, drowned in soup, tossed with meats and sauces and nuts, noodles form the bridge between our disparate Chinese food-eating cravings. They are a must for a family-style smorgasborg, but are just as essential (and taste just as delicious) eaten straight from the container, alone on the couch. What's more, a Chinese noodle tour of San Francisco and Oakland spans a variety of regions and styles, allowing us to get a small taste of this incredibly diverse country’s culinary offerings. With that, we present our 11 favorite spots for Chinese noodles, with attention paid to our preferred dishes. 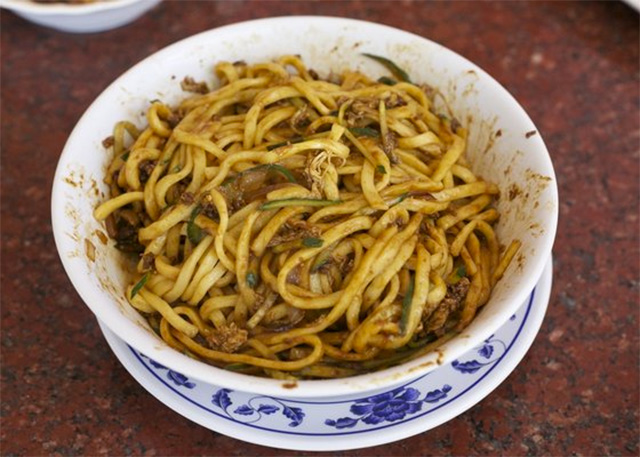 Old Mandarin Islamic
Why yes, San Francisco does have a halal Mandarin restaurant — in Parkside, to be exact. Old Mandarin is well worth the trek for all a manner of dishes, but we’re obsessed with the “Stirred Shredded Pancakes,” found under the “Flour Specialities” section of the menu. Chewy, crepe-like pancakes made from rice flour are sliced to resemble thick, doughy noodles — the texture alone has us coming back for bite after bite, but the accompanying sweet and salty soy sauce, and the egg and vegetable stir-fry add-ins, take this carby, magical dish over the top.
3132 Vicente Street between 42nd and 43rd Avenues 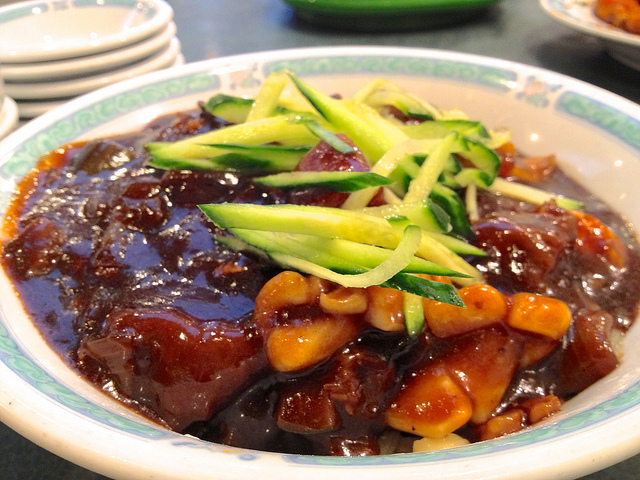 San Tung
You’d be remiss to only focus on the wings at San Tung (or San Tun # 2, right next door, with the exact same menu) — their fresh noodles are worth your attention, and may be even better than the aforementioned chicken wings. With a base of homemade noodles it’s hard to go wrong, but we’re fans of the Black Bean Sauce Noodles, featuring a salty-tangy fermented black bean sauce laced with shrimp, calamari, and beef.
1031 Irving Street between 11th and 12th Avenues 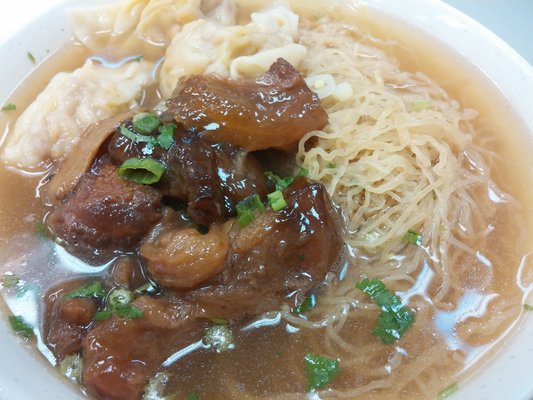 King Won Ton & Noodle
While Yelpers have written off this Outer Sunset spot with a lowly two and a half stars, the spindly-thin home-made noodles at King Won Ton & Noodle make braving the admittedly subpar service worth your while. In a Hong Kong style and inexpensive in many variations, those noodles are best with the decidedly oversized won tons. Yes, atmosphere is an afterthought or no thought at all, so perhaps this is a take-out destination, but a destination nonetheless.  Caleb Pershan
1936 Irving Street at 21st Avenue 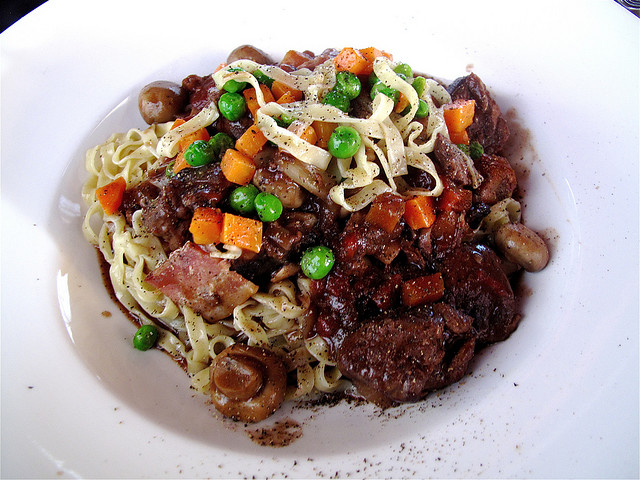 SO
Having discovered that San Tung’s noodles are tops, it stands to reason that sister restaurant SO’s noodles would be all kinds of rad, too. And, I mean, considering their feelings about gluten-free, MSG-hating diners, obviously their noodles are great. Their Black Bean Sauce Noodles are excellent, too (and have the option of a fried egg topping!), but we also dig the Stir-Fried Pork with Hot Peppers, punched up with jalapeno.
1010 Bryant Street between Converse and 8th Streets

Mission Chinese Food
Mission Chinese may have had their ups and downs this year, but their Tingly Lamb Face Noodle Soup remains one of our favorite in town. The meltingly tender lamb cheek meat is the star, but it’s well matched by buttery bok choy and springy Shanghai noodles (plus peanuts for crunch). The “tingly” factor, courtesy of a Schezuan-peppercorn laced chili oil, is spicy without completely obliterating your taste buds, allowing you to eat and enjoy even more noodles.
2234 Mission Street between 18th and 19th 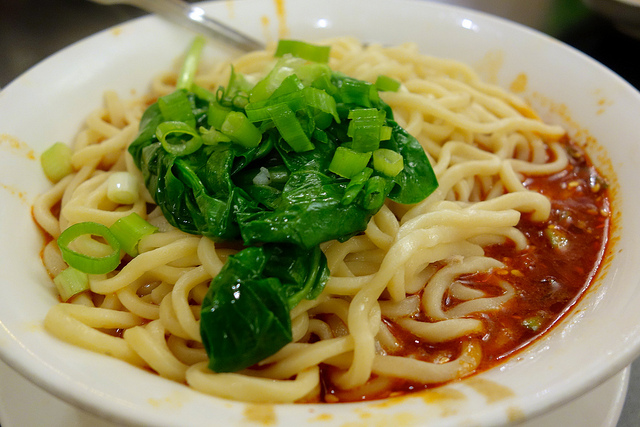 Z&Y Restaurant
Speaking of blasting out your tastebuds, Z&Y Restaurant in Chinatown is a great place to go overboard on the chili peppers. Find some balance with their excellent Tan Tan Noodles, an excellent dish featuring tender, springy noodles coated in a ground-pork dominated sauce. There is chili oil, but just enough to lend salt and a little kick of heat — sesame seeds add a nice nuttiness, and they are nothing if not generous with the garlic. It goes without saying that a nice, cold Tsing Tsao is a must here.
655 Jackson Street between Grant and Kearny.

Chino
It can be easy to get distracted at Chino, what, with the colorful decor, dumplings, and killer cocktails. But stay focused just long enough to put in an order, and thoroughly appreciate, their Chilled Sesame Noodles. This lovely little bowl of noodles features thick noodles with the right about of give, and a fantastic, salty-nutty sesame paste sauce. Cucumbers, carrots, and snow peas add freshness and crunch, while the surprising addition of mint lends an unexpected herbal freshness. It’s refreshing, satisfying, and perfectly flavorful, all at once.
3198 16th Street at Guerrero 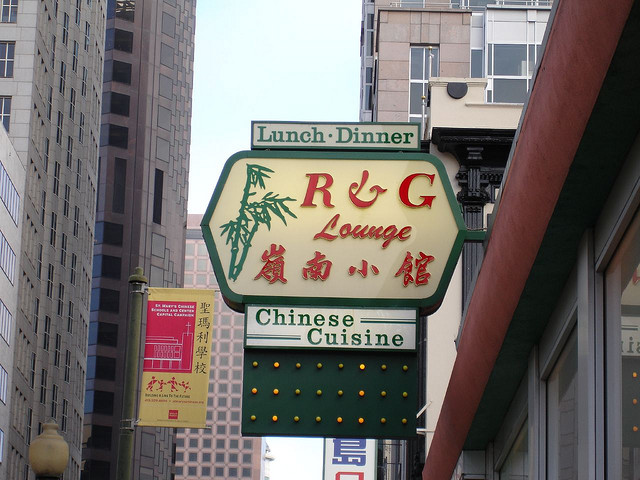 R&G Lounge
If you’re coming to R&G Lounge, you’re getting crab. This we know. You should also plan on getting noodles — because the only thing better than crisp-fried crab is crisp-fried crab with delicious, delicious noodles. Stay in theme with the Garlic Seafood Noodles a perfectly massive pile of studded with shrimp, scallops, and mussels. Or, the Longevity Noodles, topped with abalone sauce. Or: the Braised E-Fu Noodles, tossed with shredded pork, mushrooms, and chives. I mean, we won’t judge if you get them all. Just don’t forget the crab.
631 Kearny Street at Commercial 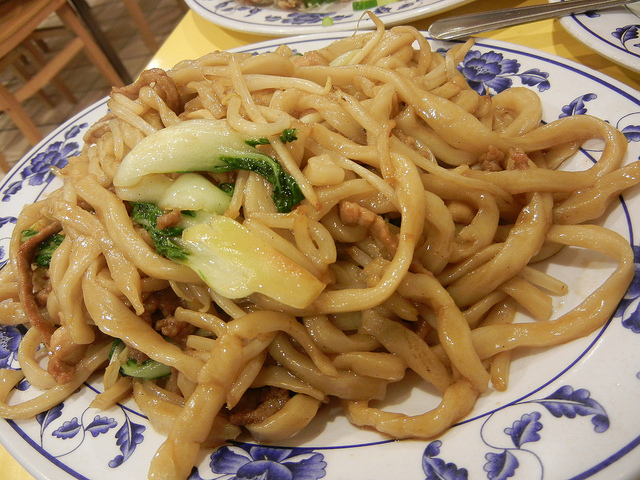 Shan Dong
Shan Dong is an institution in Oakland’s Chinatown, beloved and revered for their famous dumplings. Their noodles, though. You guys. for $1 extra, you can get any of their noodle dishes made with handmade ones — do it. They're springy and snappy, and have that perfectly uneven texture that makes handmade noodles so good. Their Spicy Sesame Paste noodles are killer — laced with chili oil and balanced with some fresh baby spinach, as is the Pork with Preserved Vegetables. Really, though, once you opt in to the handmade noodles, they’re all fantastic.
328 10th Street between Webster and Harrison, Oakland 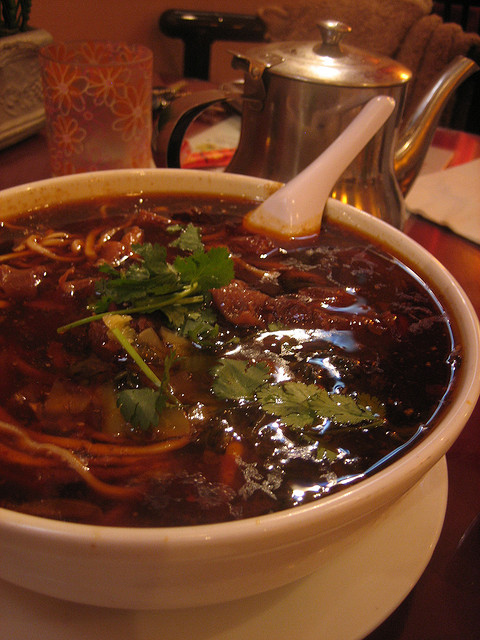 Oakland's Spices 3 has us seriously considering relocation, just so that we can get it delivered when we’re feeling a little under the weather (read: hungover). Seriously, though — this Szechuan restaurant can cure pretty much anything that ails you, be it whiskey or life induced. There is no bad noodle order, but we’re partial to the spicy Szechuan Beef Noodle Soup, loaded with silky, egg-rich noodles, ample amounts of slow-cooked beef, and a deeply savory, just-spicy-enough broth. And yes, a trip to number 3 is 100% worth it - in our expert opinion, it's far superior to Spices 1 and 2, both of which are located in the Inner Richmond.
369 12th Street between Franklin and Webster, Oakland.

When local band Pomplamoose publicized what appeared to be just a sincere plea to fans to continue their support following an alleged $11K loss on tour, many people responded to the struggle of

Free #Muni for seniors and people with disabilities rally about to start at City Hall. pic.twitter.com/Ki6N2tzNeN— Jerold Chinn (@jchinn84) January 20, 2015 In a unanimous vote yesterday, the SFMTA approved