Good, bad, or ugly, vaping is happening and San Francisco's Health Department is positioned to be the first to try to curb it, ABC 7 reports. That's it, that's the campaign name. But add a hashtag: #CurbIt.

Vaping was the 2014 word of the year according to the Oxford Dictionaries who define it as "to Inhale and exhale the vapour produced by an electronic cigarette or similar device." Now you know.

The #CurbIt signs look like this, and they'll be everywhere on billboards, Muni, and BART. 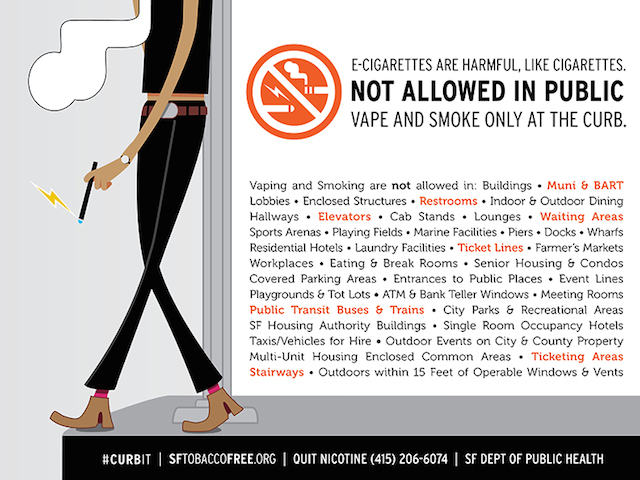 The Health Department is concerned about the suspected health risks of vaping, and in particular the risk to teenagers who might take up the habit. Hence this one.

Those cartoon characters, by the way, are supposed to represent the flavors green apple, birthday cake, and gummy bear, which totally probably exist as e-juice flavors.

SF is also limiting the number of stores selling e-cigarettes or vapes, and last year the Board of Supervisors passed an ordinance regulating e-cigarettes the same as traditional ones.

Last, according to #CurbIt's site, "San Francisco is a national leader in reducing smoking—3rd among men, 7th among women."

A new local theater company, the Fogg Theatre, launches this month with a world premiere of an original musical based on an infamous tabloid tale from the 1960s, and it's called The Cable

Sullivan's Funeral Home in the Castro (2254 Market Street), one of the last vestiges of the neighborhood's pre-1960s Irish heritage and a tragic, central landmark during the AIDS crisis of the 1980's and