This spate of December rainfall we've been having is good news, obviously, for California's drought, but everyone should understand just how much more rain we would need to see an end of the drought by spring. Short answer: a whole lot.

Predictions for a severe El Nino winter fell off earlier this year as Pacific Ocean waters failed to warm up as much as climatologists were hoping. There seems to be some consensus forming that this will be a wet winter, however the winter we need to escape drought conditions that look like the graphic below (dated two days ago) would have 150 percent of the average rainfall, or a storm like we've been getting every three to five days through spring. That, unfortunately, isn't very likely. 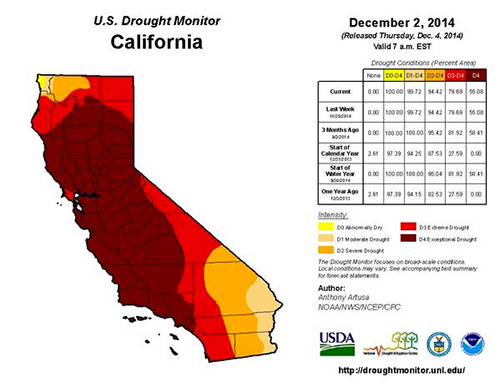 Michael Anderson, a climatologist with the California Department of Water Resources, tells NBC News that "we have a chance" to get back on track in terms of water if weather like this week's keeps up. Eight inches of rain was predicted in some spots in the state, but we will need a lot of precipitation that heads to the higher elevations of the Sierra Nevada to ensure snowpack deep enough to get us through next summer and not remain in drought conditions.

Right now, the USDA's Drought Monitor is predicting improved drought conditions across California by the end of February, but intensifying drought in northern Nevada and eastern Oregon. Nonetheless the drought is expected to remain in California beyond this winter, barring some extraordinary rainfall.

All previous drought coverage on SFist.

Nearly two weeks after window washer Pedro Perez fell from an 11 story building onto a car in the Financial District, family members say he's making a slow but steady recovery. Even slower,

The homeless man who was beaten to death by a group of three men had over a thousand dollars on his person, a San Francisco Police Department investigator says, making it clear that

—
How Much More Rain Would California Need To End The Drought?
Share this