Yesterday afternoon at Mission High School, the Brass Liberation Orchestra welcomed hundreds of attendees to a memorial for Ted Gullicksen.

"Housing is a human right!" the orchestra chanted in chorus once onstage inside, channeling the late activist and tenants' rights hero. And far from funereal, speakers like Randy Shaw of the Tenderloin Housing Clinic, Chief Attorney of the Public Defenders Office Matt Gonzalez, SF poet laureate Alejandro Murguía, and the Reverend Norman Fong all invoked Gullicksen's humor and joy. Even Falcor, Gullicksen's beloved canine companion, was onstage.

Fong went so far as to sanctify Gullicksen, who would advise the reverend to put on his collar when the police approached during protests. "Memorials, weddings, and getting arrested — that’s when I put on my collar,” said Fong, "Ted is a saint, and I told my church that a couple of weeks ago."

Gullicksen became Office Manager of the SF Tenants Union in 1988 after moving from Boston to San Francisco in 1984. Though he was at the head of the Tenants Union, he never changed his title. In 1992 he founded Homes Not Jails where he worked with Mara Raider. She recalled that Gullicksen would describe Homes Not Jails as "the only organization that writes laws during the day and breaks them at night.” More recently, Gullicksen worked to limit condominium conversions, regulate buyout agreements between landlords and tenants, and generally prevent evictions.

In her remarks, Raider recalled Gullicksen's tools as symbols of his activism and spirit. These included a bullhorn (through which he would shout in his thick Boston accent), chocolate espresso beans (a favorite coffee substitute), bolt cutters (for breaking and occupying), and Super Glue (with which he once jammed locks at the Transbay Terminal to keep police from displacing the homeless). 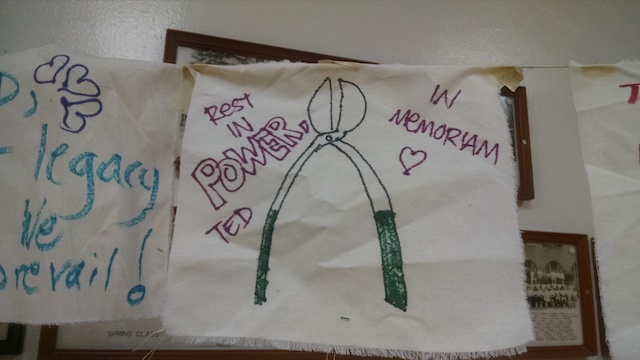 "We are all Ted's Heirs" read the program: full of poetry, praise, and even this illustration (sold on T-shirts in the lobby).

Your Airbnb rental will now come with a magazine, called Pineapple, since Airbnb is creating that. [The Awl] A new study confirms it: Black and latino executives are scarce in Silicon Valley. [SFGate]