The game was close, and it came down once again to pitcher Madison Bumgarner shutting down the Royals' offense in the final innings, allowing the Giants to keep a 3-2 lead and close out the bottom of the 9th with a minimum of drama. San Francisco was, cautiously, expecting this, but at the same time never as confident in their swagger as, say, the Yankees of ten years ago, and this win was certainly not guaranteed.

As I type, much of San Francisco is still spilling out of bars and homes into the streets, and the San Francisco Police Department, having done this a couple of times in recent years, are canvasing neighborhoods, directing traffic, discouraging the lighting of fireworks, and trying to avoid at least some of the chaos that has erupted the last two times this happened, in 2010, and 2012.

Below, we have some photos, video, and tweets of the scene in San Francisco's Mission district, on Market Street, and elsewhere.

At least from my limited tour of the middle of town, less of the city's trash cans and street corners appear to be on fire than two years ago, but it's not even midnight. And as CBS 5 reports, at least one couch was set ablaze at Mission and 19th. Update: Two people have possibly been injured by stray bullets in the celebration, and some vandalism and chaos appears to be occurring simultaneously in a few parts of town. 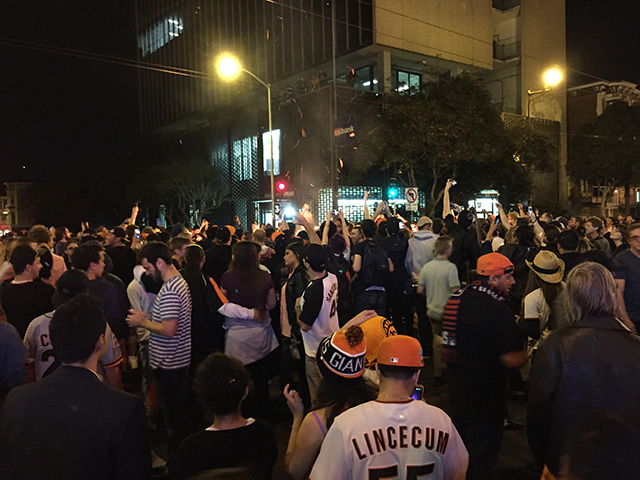 The scene at 22nd and Mission. (Photo by Jessica Christian / The Chronicle) http://t.co/sZUMx1DzXV pic.twitter.com/Ayp8dCjtPB

In the Mission, as thousands of residents and fans spilled into the streets following the Giants Game 7 victory in the World Series, at least two people appear to have been injured by

After a Health Department shutdown, Sliderbar has reopened. You going? [Hoodline] Vintage SF postcards and how the same views look today. [Curbed SF] These long-time San Franciscans are all getting evicted from their