Forest City Development, which is also developing the massive Pier 70 project that you'll be voting on in November, has unveiled details this week of another huge project they have planned for the block that's home to the Chronicle building, on 5th between Mission and Howard. It's called 5M, and as the Business Times reports, Forest City has just submitted their 740-page environmental-impact report in preparation for the first public hearing on the project on November 20.

We still don't know really what this thing will look like  we're not even at the design stage yet  but they are currently proposing two different scenarios for the site, both of which would include the renovation of the Chronicle building and the attached Dempster Print Building (447 Minna). In one scenario, shown above, the Chronicle building gets a rooftop garden/park.

Per the Business Times:

The full site crosses over both Natoma and Minna Streets, and the project would involve the razing of multiple existing buildings  including the former headquarters of the Chron's food department, which they just vacated last year. Socketsite has further details about the various parcels.

Construction is set to begin in 2016, but Forest City will need to get dozens of approvals before then, including an up-zoning to build taller than 160 feet, which is the current limit for that block.

The best news, as seen in the concept rendering below: 5M will block sight lines of the hideous Intercontinental Hotel, so at least from the north and west we won't have to look at that Vegas-style atrocity all the time anymore. 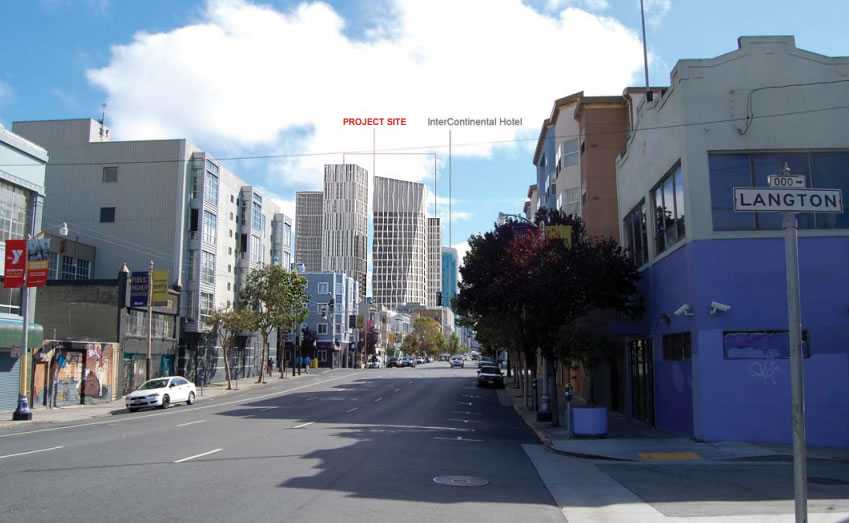 Though it's long been rumored that actor Christian "Good For You" Bale was being eyed to play Steve Jobs in an upcoming bio-pic, industry publication Variety seems so sure that those rumors are

You saw the man chug four cans. You saw him chug five. And now the SF Giants newly-annointed NCLS VP Madison Bumgarner took on six beers (and a bottle of champagne) following the