Assuming you saw the video that spawned another million gentrification conversations over the weekend, you'll be relieved to know that one of the guys involved, who is apparently a Dropbox employee and may have been playing in a corporate league, has apologized. Also, for what it's worth to the entire Mission soccer-playing community, Dropbox has issued a formal apology too.

It's not completely clear which of the men in the video is Jean-Denis Greze who posted the following tweet-apology over the weekend, after the video went wildly viral  and after Valleywag made the Dropbox connection, via one of the guys' jerseys. This may be the guy in the photo above (and there's a second guy behind him also wearing a Dropbox shirt), but I'm still not sure what he said, specifically, that was insensitive. The guy who showed up with the permit was the most obnoxious one, and he's wearing a Hiscox t-shirt  and he may have been part of an Airbnb team, according to Valleywag. 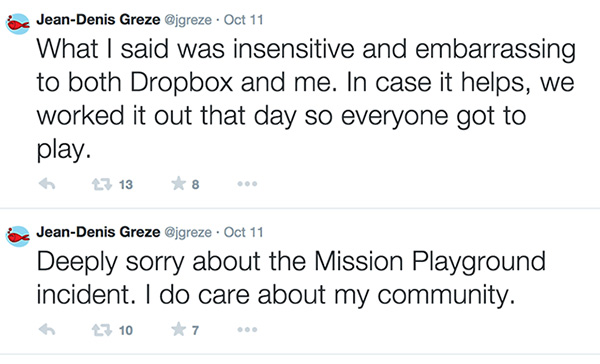 Here's the Dropbox statement, via SFGate:

We love San Francisco and are grateful to call it home. That’s why we were disappointed to learn that a couple of our employees weren’t respectful to this community. The employees involved are embarrassed and have apologized. We’re sorry, and we promise to do better.

The company of course has little to do with this, and all told the tensions surrounding the use of the field at Mission Playground seems to be the fault of Rec & Parks, who had not done enough messaging within the community about their relatively recent change to allow reserved gameplay on Tuesday and Thursday evenings. And perhaps the reserved gameplay concept was a bad idea for this field to begin with, given what all the kids who use it seem to be saying.

But everyone is really sorry! Except for Rec & Parks. Their spokesperson Connie Chan just said she recognizes that the city has "limited open space" and "we encourage all our park users to respect one another and share our parks."

Update: Welp, it looks like the San Francisco Latino Democratic Club is planning a protest at City Hall on Thursday morning to reject Rec & Parks' soccer-field reservation system. As they say in a statement, "The youth of our city should not have to pay to use our public parks." This protest will happen at 9 a.m., and as Uptown Almanac first reported, the demands include:

Noe Valley residents had a collective coronary over the weekend after this apparently fake liquor license transfer application for "Neighborhooters" went up on the boarded up former Bliss Bar at 4026 24th Street.

People in SF paid $32,400 each for a roundtable with President Obama Saturday morning. [Washington Times] Little girl who was lost at Ocean Beach found safe. [KRON4] How the Loma Prieta quake