New Castro Mexican spot Bandidos, which just finished its first week in business, is facing some San Francisco-style backlash from the Mexican-American community who say that the name "bandido" is a historically derogatory and ethnically offensive term. The backlash erupted, as so many do, via Facebook, and owners Jesse Woodward and Dana Gleim are now meeting with local queer comedian Marga Gomez who appears to have been the person who jumpstarted the Facebook tidal wave.

Gomez, who resides in the Castro and is Puerto Rican/Cuban-American, began by saying to the restaurant, "I heard about your concept and wanted to try your food. But then I heard you chose the name Bandidos, which has been used as a racial slur against Mexican Americans, and I can not in good conscience walk in the door." She then alerted the blog Latino Rebels, saying she wanted them to change the name.

As of now, Bandidos has disabled posting on their Facebook page, but here's the message they posted over the weekend in response to the initial flood of controversy. 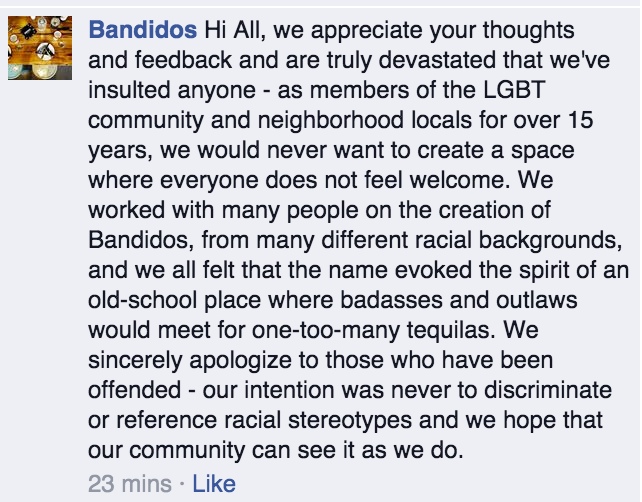 It appears that Woodward and Gleim conferred with Gomez on Monday, who then wrote on Facebook, "It was great talking to you both on the phone today and expressing our intentions respectfully. I maintain the importance of the name change. But we'll keep talking."

Meanwhile, supporters of the restaurant, including Latino-Americans, have also responded the uproar with comments like, "In the Latin culture we usually tell each other bandido, or bandida with nothing negative but meaning that she or he is acting bad... I do not get why are we attacking, insulting, and making the owners feel bad for choosing Bandidos as a name." And "How about Gringos?"

As of Monday afternoon, it appeared that the restaurant may already be removing the name, as it was getting scraped from a window above the entrance door, seen below via Twitter.

@eatersf @insidescoopsf name coming off the window at Bandidos. pic.twitter.com/ih9sVxsMwU

The owners, however, have yet to release an official statement about their plans. We'll update you on the situation as we learn more.

Apple's biggest and most anticipated unveiling in at least two years is happening this morning in Cupertino, and news correspondents from the East Coast have been standing outside the large, mysterious white cube

It's been a violent summer for the residents of Visitacion Valley. [KCBS] An [NBC Bay Area] reporter tours San Francisco's sewer system. Now ISIS (or its associates) wants to kill people who work