As you probably heard, despite a lot of mixed reviews, HBO's S.F.-set gay dramedy Looking was renewed for a second season, and shooting is now starting up again here on location. There's already a casting call out there for extras, and over the weekend the stars were starting to get spotted around town.

A friend tells SFist that they saw Jonathan Groff out jogging near Golden Gate Park on Saturday, and several people reported seeing Russell Tovey, who plays Groff's British love interest/boss Kevin, at SoMa gay bar The Powerhouse, possibly with his husband in tow. 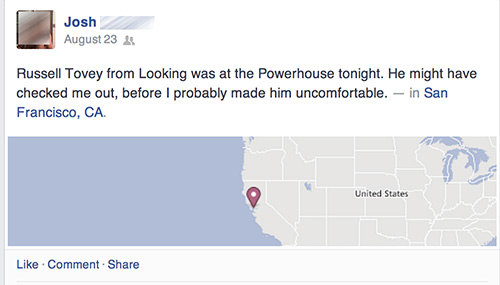 Also, the whole gang, along with Murray Bartlett, watched the Emmys last night together with director Andrew Haigh (somewhere in San Francisco), and tried not to be bitter that they didn't get any recognition.

Be on the lookout for the Looking crew in the coming weeks, and tip us off when you spot them.

Update: This SFist editor spotted Groff, Bartlett, and Haigh meeting over coffee at Sit and Spin in the Castro Tuesday evening.

Previously: 'Looking' Episode Eight: Going Out With A Bang, On The Office Floor

The new sit-down Mexican spot coming to the Castro from the Hi Tops team, Bandidos, is now set to open next week, on September 2, right after Labor Day. Owners Dana Gleim and