That Norman Foster-designed, 910-foot tower at First and Mission Streets which did not have a complete rendering as of last week now does, along with a full, early critique by architecture critic John King. Also, we get our first (albeit sketchy) rendering of an enormous residential tower proposed for the Goodwill property at Mission and South Van Ness.

The Foster + Partners project looks to be an interesting balancing act between the firm's typically elegant and sometimes audacious style, the desires of the developer to maximize square footage, and the limits imposed by San Francisco in terms of tapering the building's bulk as it rises, and the inevitable shadow-casting concerns. King already says the design "needs to go on a diet," pointing out that it feels too bulky and daunting particularly on the First Street side, where it will rise, he says, as "a sheer glass-and-metal cliff." The building is set to have both office and residential components, with the residences on the higher floors, and King says the designers need to "whittle the square footage so that the bulk of the tower isn't so, yes, bulky."

But, King notes, the huge open courtyard/plaza at the base will be cool, and will get some design help from landscape architect Kathryn Gustafson, who worked with Foster on the rad courtyard enclosure project at the Smithsonian in D.C.

Below, a rendering of the public plaza, which will sit below 70-foot-high stilts. We still don't know what the building's companion tower will look like, but it will be a not-inconsiderable 605 feet, facing Mission Street.

Also below, a rendering of a different project: 1500 Mission. As Socketsite reports, that project will be a 30-story residential tower on the current site of the Goodwill at South Van Ness, and will include 565 rental units averaging 728 square feet  20 percent of those, or 113 units will be set aside as below-market-rate units (meaning that this was likely a project that could have been killed by Jane Kim's proposed 30-percent affordable requirement, which she's since compromised on). This building will also include 450,000 square feet of offices along Mission Street which will be rented by the City as new homes for the Department of Public Works, the Planning Department and the Department of Building Inspection. The City then has plans to sell its properties at 30 Van Ness Avenue, 1660 Mission Street, and 1680 Mission Street. 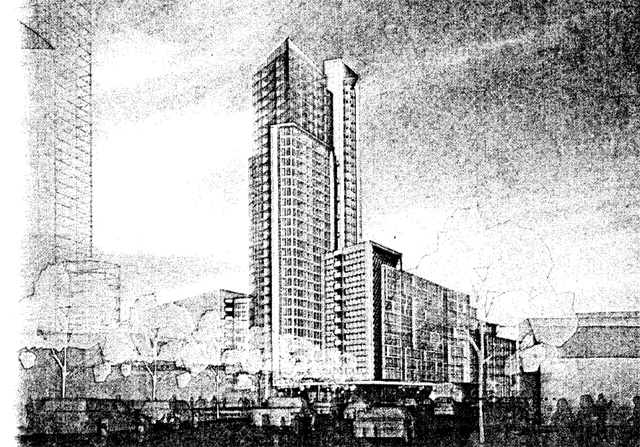 The sketchy rendering of the 30+-story complex at Mission and South Van Ness, courtesy of developer Related California.

The public plaza that will face First Street between Mission and Jessie. Rendering courtesy of Foster + Partners.

No longer protected by a 25-foot no-protest zone, the Planned Parenthood on Valencia Street reports that harassment and intimidation of patients and staff has escalated. It even goes as far as one protestor

A woman's quick reflexes and a baby's sheer luck were the only things that prevented tragedy last Friday, when a traffic collision in SoMa sent an SUV straight into the path of a

—
We Now Have Renderings Of Tall Towers at First and Mission, and South Van Ness and Mission
Share this