We heard back in March that Foster + Partners had been tapped for this property, his third concurrent Bay Area project, at First and Mission Streets, adjacent to the Transbay Transit Center. (He's also working on Apple's new "spaceship" campus, and the rad new Apple Store coming to Union Square.) The new project includes two towers, one 600 feet and the other 910 feet (approx. 60 stories), which would sit on the skyline just to the right of the upcoming Salesforce Tower (1070 feet) as you come over the Bay Bridge. For this project, Foster + Partners will be paired with local architects Heller Manus who are also working on another cool, 52-story tower at 181 Fremont.

The Chron now has a couple of initial renderings of the proposed buildings from far away, and an illustration suggesting the taller of the two will likely to be a glass tower with steel cross-hatching that gets more slender as it goes up, along the lines of the famed London project, formally known as 30 St. Mary's Axe. It may be more squared off at the sides, but now we're basically guessing. The London tower is one of the greenest skyscrapers in the world, using half the energy of similar-height buildings through an innovative use of "lungs" in the form of atria that draw air through the double-skin of the building, naturally cooling it. Hopefully some clearer renderings of the proposed S.F. tower will surface soon, but in the meantime, here's the illustration showing the comparative height of the taller tower. 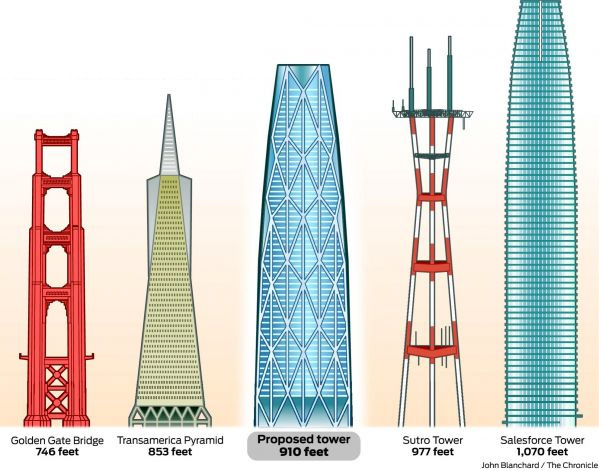 Developers TMG already own most of the block bounded by First, Mission, Stevenson, and Ecker Place, and they tell the Chron that they plan to preserve a few of the older, shorter masonry buildings surrounding the tower sites, including a four-story brick building from 1906 that sits on the alley, Ecker Place. They'll also be preserving the tiniest alley in San Francisco, the eight feet wide Elim Alley, which runs between buildings off of First.

Below are a couple of the buildings, on the corner of First and Mission, that they're planning to preserve, with those that will be demolished in the background. See a map of the plan here. 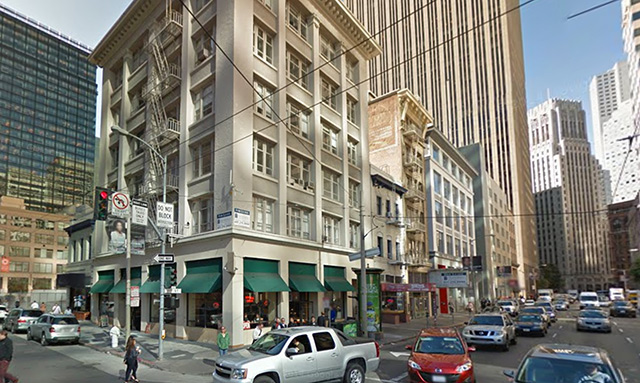 To be clear, these will be massive buildings, and presumably iconic. TMG CEO Michael Covarrubias earlier said of the project that it "will be transformative and will be the last mixed-use development of this scale in this area of downtown."

This news follows close on the heels of those renderings of the proposed awesome new condo tower from Chicago architect Jeanne Gang, and it joins all these other projects in the works around the Transbay Center that will, once completed, represent a total transformation for our once drab skyline.

We already saw this rendering of the proposed, open-air, street-level space in the tower, and now Foster + Partners design director Stefan Behling tells the Chron, "The way you walk along and through that building will be different from anything that you've encountered before... A space of this scale has the potential to make people go 'wow.'"

We'll be going "wow" if this thing gets approved by next summer, as the developer is hoping, and gets under construction as planned in 2016.

Illustration via the Chronicle. The design not complete and it may not look like this.

Not to be confused with that creepy private-equity executive posing as a TSA agent at SFO or the San Francisco man acting like a police officer to sexually assault women, this new impostor

A 26-year-old San Lorenzo man died on Monday, July 21, after being buried alive by a sand tunnel he was building at Francis Beach in Half Moon Bay. As the San Jose Mercury