4505 Burgers & BBQ
A thin grass-fed beef patty, iceberg lettuce, onions, gruyere and secret sauce on a buttery, seeded bun combine to make a burger that's simple, straightforward and effective. It's the platonic ideal of a fast food-style burger, but without the fast food aftertaste. (Pro-tip: if you really want to one-up the corporate burger machine, order the ridiculous, off-menu Big Mac.) —Andrew Dalton
705 Divisadero (at Grove)
Thursdays and Saturdays at the Ferry Plaza Farmers Market 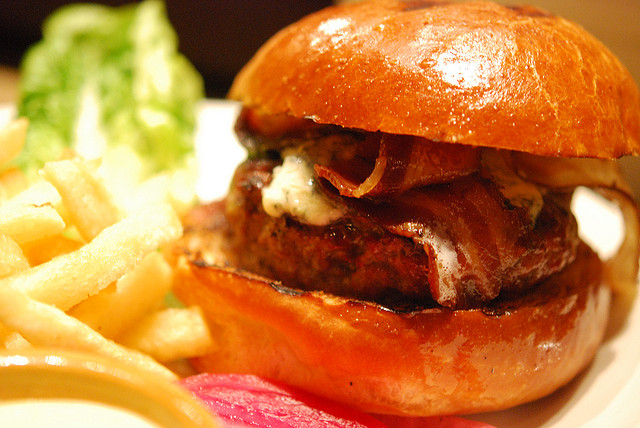 Nopa
Still a favorite when it comes to high-end bar menu staples, Nopa's burger consists of a lean, grass-fed patty topped with house-pickled onions and homemade ketchup. Add on a slice cheese to fatten it up a bit and let it all come together around a side of perfectly crisp fries. —Andrew Dalton
560 Divisadero Street (at Hayes) 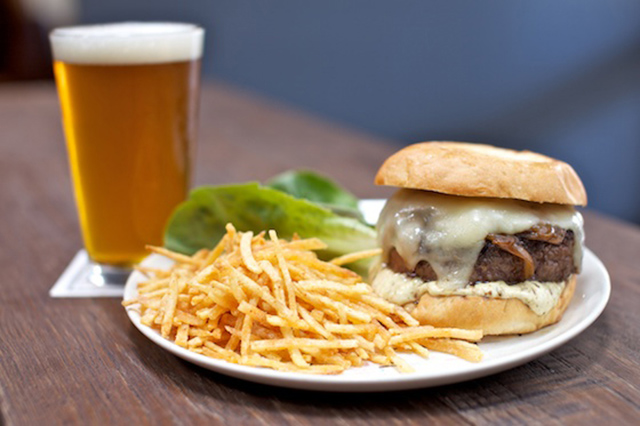 Mission Bowling Club
There's still no beating the granulated burger patty technique that chefs Danny Bowien and Anthony Myint perfected at Mission Street Food before moving onto bigger and better things. For the past few years, the burger has had a permanent home at Mission Bowling Club where the thick patties still get cooked in a shallow pool of beef tallow to form a perfect crust that gets slathered in jack cheese and held together with a toasted bun and a smear of caper aioli. —Andrew Dalton
3176 17th St (at South Van Ness) 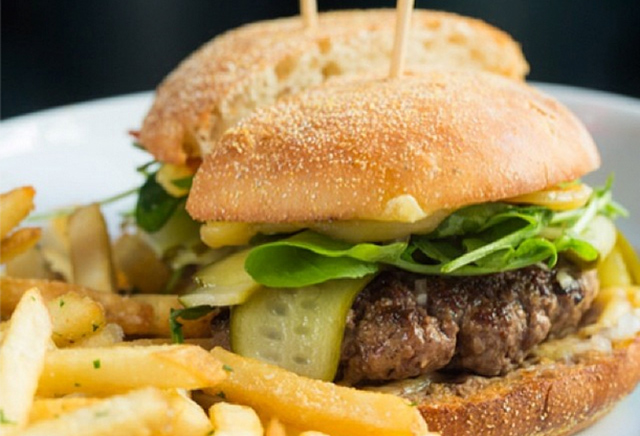 Marlowe/Park Tavern/The Cavalier
We've always loved the Marlowe burger and its blend of beef with lamb that had Michael Bauer raving for years, but these days we've been craving chef Jennifer Puccio's latest burger creation at the Cavalier where it comes with cheddar, tomato chutney, mustard and onions. —Andrew Dalton
360 Jessie St (off Fifth Street, between Market and Mission) 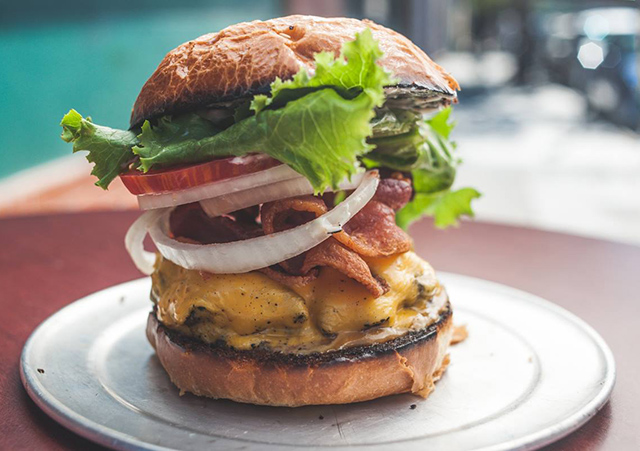 The Wes Burger
Professional burger aficionado Wes Rowe first caught our attention by riffing on a stoner favorite from Jack in the Box, but weekly pop-ups have proven his personal burger method is more than a stunt food. Burgers start with ground brisket patties, that get salted and seared on cast-iron before getting topped according to the whims of the cook that week. Keep an eye out for the original Hot Wes with onion rings, queso cheese and jalapeños, or the all-too-rare Frito Pie burger, smothered in onions, chili gravy, queso cheese and Fritos. —Andrew Dalton
Wednesday nights at Mojo Bicycle Café, 639 Divisadero St. (at Grove)
Elsewhere, occasionally. 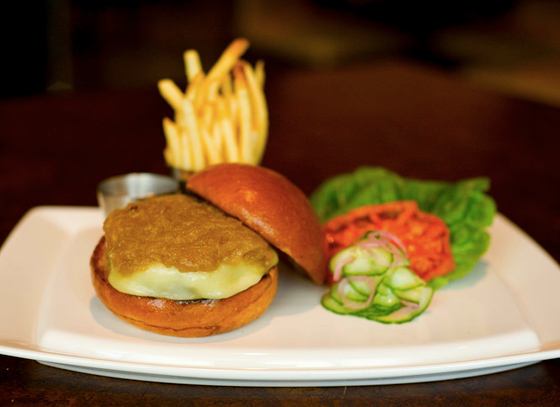 Bourbon Steak
Among the high-end burgers in town, where you'll be plunking down more than $20 for your meat fix, I have some very high praise for the hand-ground steak burger at Michael Mina's Union Square steakhouse, which served primarily in the bar. It is dripping with flavor but not overly fatty, and more than (almost) any other burger in town, it will remind you what beef is supposed to taste like. It comes topped with Nicasio cheese and caramelized onions, along with some excellent duck-fat french fries, and if you're looking to treat yourself some night and you're wandering by, this is how to do it.  Jay Barmann
335 Powell Street at the Westin St. Francis 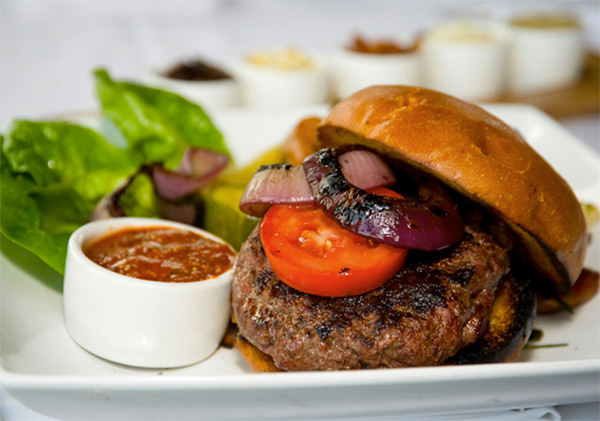 Epic Roasthouse
Compared to the Bourbon Steak burger, the one at Epic, made with house-ground American Wagyu raised at Thompson River Ranch in Montana, is practically a steal at $15. It's only technically available on the lunch and bar menus, but they may make an exception for you in the dining room at dinner. The coarsely ground beef crumbles so satisfyingly, and it's the kind of steakhouse burger that all steakhouses should have, but sadly don't.  Jay Barmann
369 Embarcadero 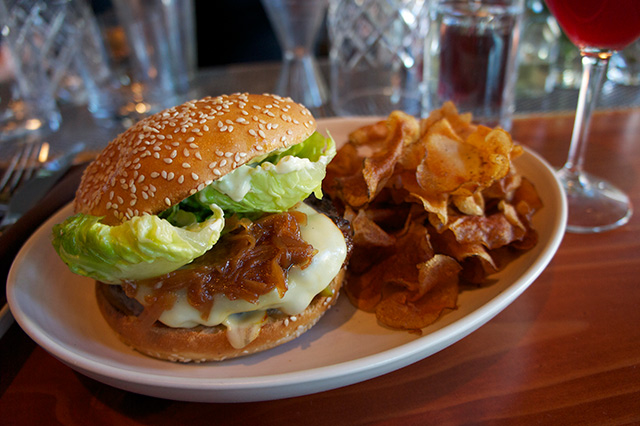 Maven
It's one of those "why aren't more people doing this?" situations: The secret to Maven's delicious and uniquely spiced burger ($13) is a few dashes of Angostura bitters, which goes right into the meat. The bottle actually says it's great with meat, but those bitters are typically always trapped on the booze shelf. Anyway, it's one of the tastiest bets in town, topped with Muenster cheese and house pickles, and it's been a hit since this place opened in 2012.  Jay Barmann
598 Haight Street at Steiner 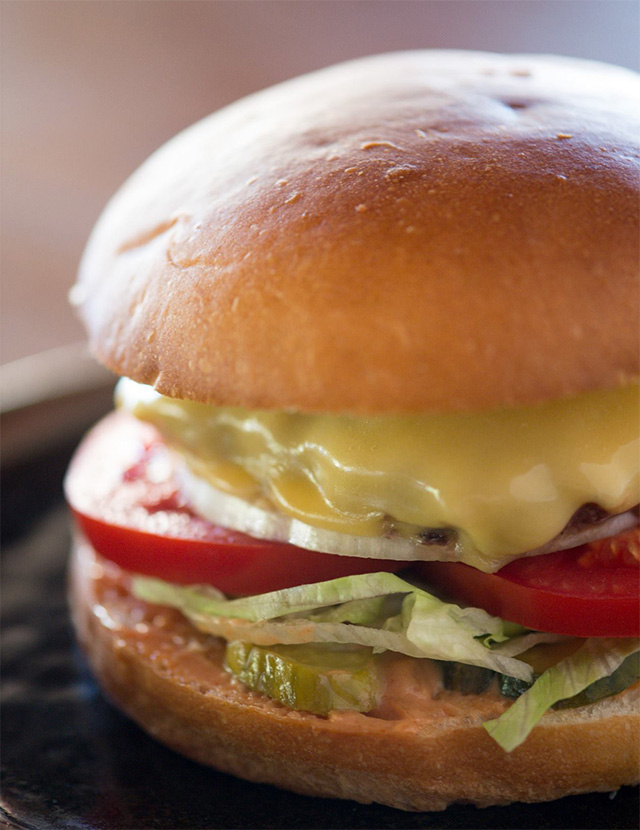 Fog City
For the revamped former Fog City Diner, chef Bruce Hill went for classic American cheeseburger realness, but with a couple simple twists. First, there's house-made American cheese, and then in lieu of ketchup and mayo he's using a smoked tomato aioli, which is just a slightly fancier way of saying "special sauce." Topped with some bread and butter pickles, onion, lettuce and tomato, it's an haute big mac, made with beef you actually want to eat.  Jay Barmann
1300 Battery Street at the Embarcadero 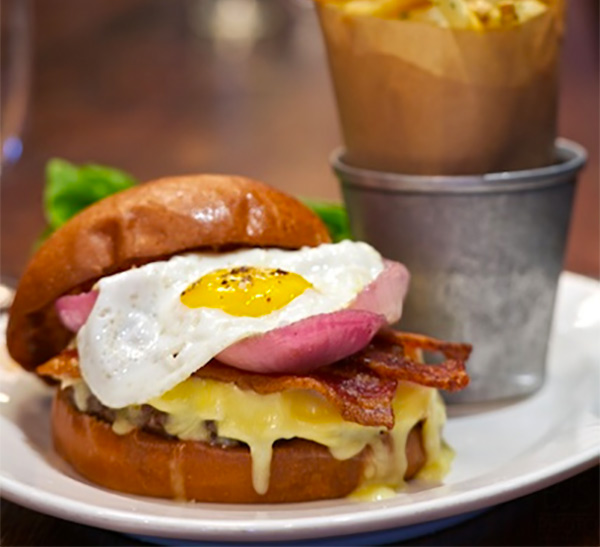 Wayfare Tavern
Tyler Florence made sure there was a top-notch burger ($20) on his tavern's menu from the get-go, and though some of the rest of the menu has changed since Wayfare's 2010 opening, the burger hasn't. It's served on a delicious brioche bun and made with a proprietary, grass-fed beef mix and comes topped with Marin County brie, roasted onions, bacon, and an optional (I'd say mandatory) fried egg. It's a sloppy, satisfying mess to eat, and continues to be a top seller for the FiDi crowds.  Jay Barmann
558 Sacramento Street near Montgomery 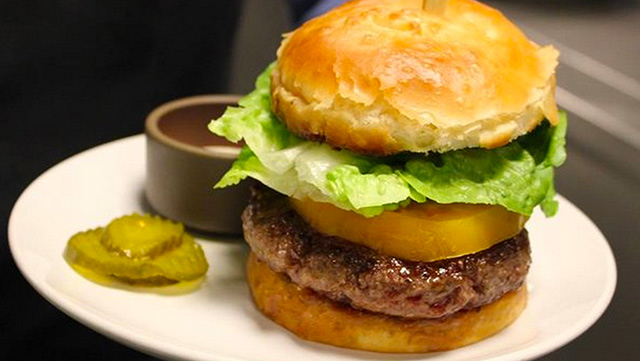 Prospect
Available only on the bar menu, Prospect's simple, perfectly made burger ($12.50), served with white cheddar, pickles, and "special sauce," is a perfect mid-week meal, especially with some fries and one of their excellent cocktails.  Jay Barmann
300 Spear Street at Folsom 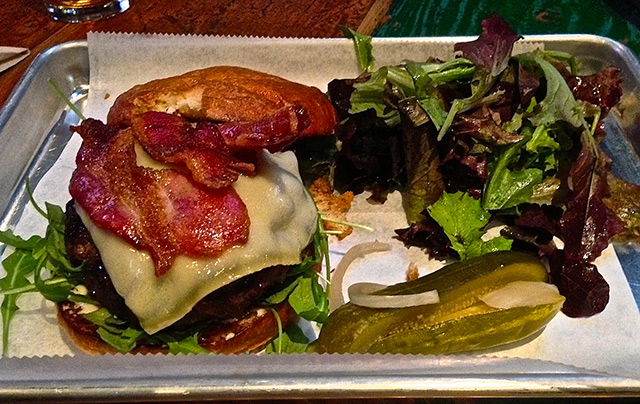 The Hi Tops burger pictured here in a form known mostly to the carb-conscious, with a salad instead of fries. Photo: A.W./Flickr

Hi Tops
Probably the best burger in the Castro is the bacon-beef burger at Hi Tops ($12), in which you have a classic combo of beef and bacon, but the bacon's always crisp and the patty is always juicy. The burger comes topped Gruyere unless you say otherwise, as well as onion jam and aioli, and suffice it to say it is one of the ultimate hangover meals in the 'hood.  Jay Barmann
2247 Market Street between Noe and Sanchez 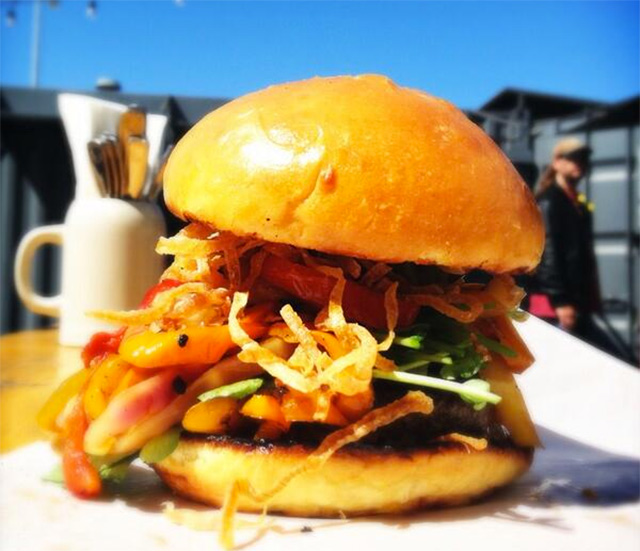 Biergarten
The obvious answer to where to go on a sunny Wednesday if you get out of work early (or if you're funemployed) and you're near Hayes Valley, is Biergarten. And Wednesday is the one day a week they serve burgers, the toppings on which change every week (the one pictured above featured a pile of crispy shallots, sweet peppers, and smoked blue cheese), but the thing is always made with a half pound of Prather Ranch beef. It is seriously goddamn good, and absolutely a good reason you should be leaving work early today.  Jay Barmann
424 Octavia Street at Fell

Honorable Mention: Doc's of the Bay and FiveTen Burger can't be beat when you need to get a burger from a truck; Rickybobby for a delicious patty that has bacon ground into it; Heirloom Cafe for their "off-menu" but always announced, wine-friendly Epoisses cheese burger; Super Duper Burger will give you that homegrown chain restaurant fix; and no list would be complete without a nod to In-N-Out and a complaint about the lack thereof.

We've heard tell of recent occasional pass-throughs by Mission police busting people with open containers of beer and wine, and of course this useless harassment of tipsy sunbathers goes back several years. But

"Do you know how hard it is to find a uterus pinata?" Please enjoy this amazing long-form commercial from Hello Flo, a new menstruation-related subscription service for ladies and teens (tagline: "Like Santa