For the most part, San Francisco likes to look up and see its skyline dotted with landmarks and infrastructure more than it likes to look up and see monuments to corporate culture. (Just look at our logo.) That'll change soon when the Transbay Tower finally pops up as the Salesforce Tower in SoMa, but until then here are our favorite tall buildings, plus one low one and one giant monolith.


140 New Montgomery a.k.a. the PacBell Building
San Francisco's first skyscraper was only its tallest during a brief period from when it was completed in 1925 until the Russ Building matched its height in 1927. The ornate art deco arch, cast in the same granite-colored terra cotta as the rest of the façade, looms over the entryway on New Montgomery Street and the building's L shape makes it an bigger presence that its more recent neighbors in SoMa. (The eight 13-foot-tall eagle statues in the crown don't hurt either.) The building once hosted Winston Churchill as he made one of the first transatlantic phone calls. Nowadays, the building lends its innovation cred to the people responsible for Yelp. For further reading on the building, try The Atlantic's "A 26-Story History of San Francisco." —Andrew Dalton
140 New Montgomery (between Mission and Howard) 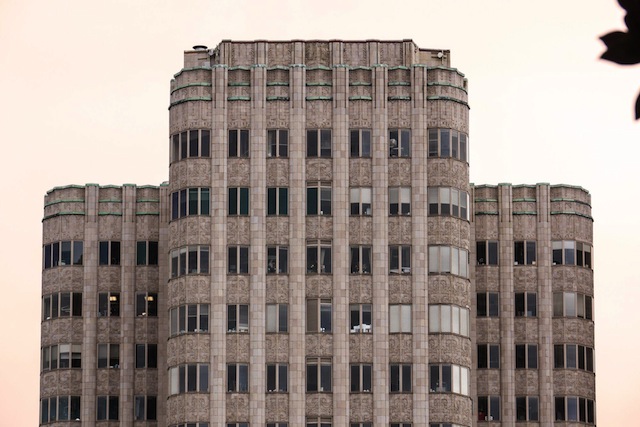 450 Sutter Street
Timothy Pfleuger's "Neo-Mayan" Art Deco masterpiece can be dizzying when you first step into the elaborately decorated elevator lobby. Like something out of Blade Runner or a vision of the future created by someone in the past. Because the building mostly hosts medical and dental offices, many visitor have had the pleasure of leaving the building under an anesthetic haze (your truly included, I didn't need those wisdom teeth anyway). Others have taken a more objective look at the building and the structure of the façade was echoed years later in 555 California. —Andrew Dalton
450 Sutter Street (between Powell and Stockton) 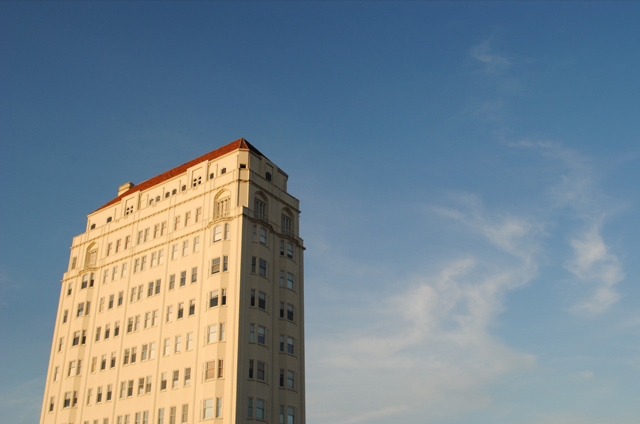 2500 Steiner a.k.a. Alta Plaza Apartments
With a stark white face and tiled terra cotta roof, 2500 Steiner casts a cosmopolitan shadow over the other billionaires in Pac Heights, openly mocking them for living so low to the ground. Built in the 1920s by San Francisco native Conrad Alfred Meussdorffer (we're assuming he mentioned that fact to somebody), this is the sort of building that would never get through the city's NIMBY gauntlet today, even at a relatively short 12 stories. Adding to to the building's character, the penthouse is occupied by the breezy businesswoman responsible for the Esprit clothing line and the directory reads like a who's-who of San Francisco democrats. —Andrew Dalton
2500 Steiner (at Jackson) 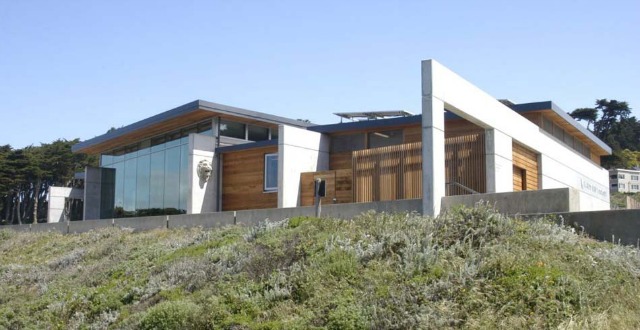 Photo of the Lands End Lookout by architect EHDD

The Lands End Lookout
If a Red Dawn style coup happened in San Francisco, the Lands End Lookout is where the chicest member of our team of tyrant overlords would rest his or her head. Perched over Ocean Beach, this deceptively simple wood, glass and cement box blends almost seamlessly with its surroundings, but when you're inside the low-slung building it feels as big as all the outdoors. A lot of structures in our country's National Parks can feel dated, cheesy, or federal-cookie cutter, but not the Lookout—local design shop EHDD has created a visitors center that feels sexy, strong, sleek, and urban but still natural. Just like San Francisco. (Bonus: the large stone lions outside the building both sport impressively realistic sets of balls. Not part of the building, but still bears mentioning.) -- Eve Batey
680 Point Lobos Avenue (At the southwest side of the Merrie Way Parking Lot above Sutro Baths Ruins) 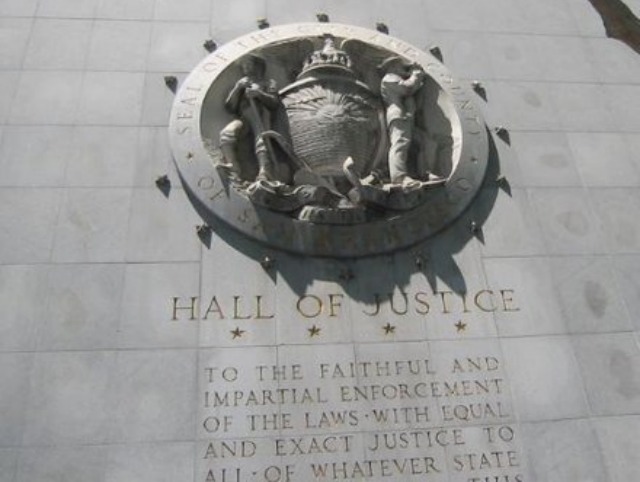 Detail from the facade of the Hall of Justice: Mike W/Yelp

The San Francisco Hall of Justice aka 850 Bryant
Built in 1958, a shot inside or outside this building acted as handy shorthand for good old American justice in a slew of 70's-era movies and TV shows. Speaking of the 70's, stepping inside this building is like taking a trip in a time machine, with elderly vintage elevators, linoleum, woodwork, and period details. Home to SF county's main criminal courts, the main jail, the morgue, and pretty much every local law enforcement branch you can think of, after five minutes in this building you'll expect to see Raymond Burr tooling around in a wheelchair or Michael Douglas long before his alleged jowl-lift. Yes, it's kind of a monolith. Yes, there are more architecturally daring or gorgeous buildings in San Francisco, and sure, 850 Bryant just might kill everyone inside during a big earthquake. But that age and edge is what makes it one of San Francisco's best. We're a city that's known for embracing grit over glitz, and for doing what we can to keep things real, even in the face of utter unreality. And it doesn't get much realer than 850 Bryant. -- Eve Batey
850 Bryant Street 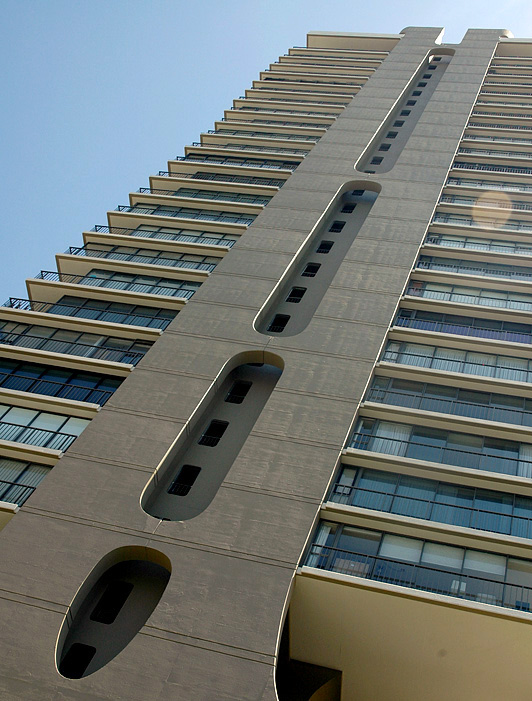 999 Green Street a.k.a. Eichler's Summit Tower
It's one of San Francisco's most prominent, high modernist condo towers, completed in 1965 and designed by Tibor Fecskes for the firm of famed Bay Area architect Joseph Eichler, and you've probably noticed it perched atop Russian Hill without knowing what it was. Its roof was, briefly, the highest point in San Francisco, as a 32-story building sitting on a 290-foot hill. Its 26 residential floors contain some of the most expensive condos around the Bay  this double unit with sweeping views was marketed for $2.1 million and others have sold for over $3 million. It's a striking, clean, glass-and-concrete tower, made interesting with step-backs and flares from the upper balconies, and the Chronicle's architecture critic John King wrote a few years ago, "[999 Green] has a sculptural vigor that looks better with each new pallid competitor that rises in other parts of the city. It's a building that deserves to be polished and sharpened." Also, sidenote: Pat Montandon once lived in a penthouse here with son Sean Wilsey, and in his memoir Oh the Glory of It All, Wilsey recollected his mother suggesting, right after her divorce, that she and he jump off the balcony together saying, "That'd show your dad. We'll teach him a lesson together." See more photos here.  Jay Barmann 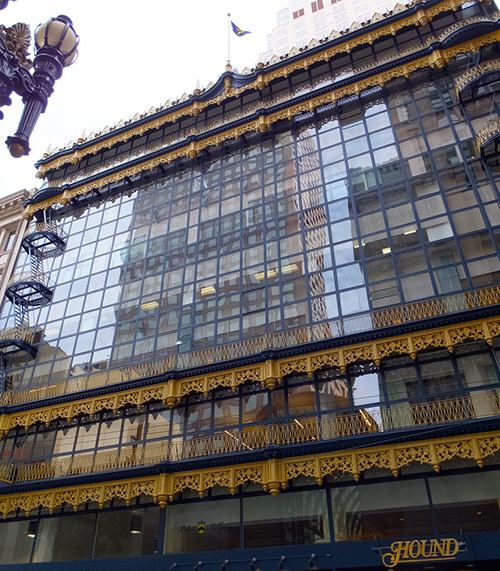 130 Sutter Street, a.k.a. The Hallidie Building
Designed by Willis Polk in 1918, the seven-story Hallidie Building is thought to have been the first example of an all-glass curtain wall in the United States. It just underwent a renovation, completed in 2013, and the thing shimmers now, shinier than ever, with its Gothic metal detailing and Edwardian fire-escapes adding to its charm. It was originally built as an investment property for the University of California and it was named for Andrew Hallidie, a University regent and the inventor of the cable car. It's a beautiful example of innovation from a period of commercial architecture the city has very little of, and thus walking past it you wonder for a second if you're in Chicago, or London.  Jay Barmann 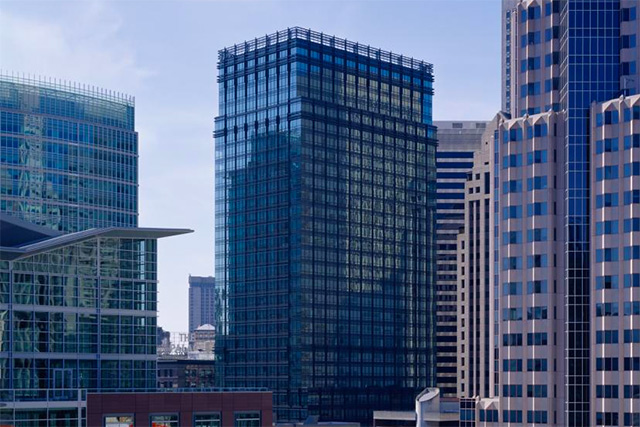 560 Mission Street, a.k.a. the JPMorganChase Building
Soon, the firm of Pelli Clarke Pelli will be seeing their design for the tallest building on the West Coast rising in San Francisco, the newly named Salesforce Tower. But back in 2002 they built another office tower that doesn't always get a ton of attention, but is nonetheless one of the most beautiful and thoughtfully designed of our many boxy, rectangular downtown office towers  which are almost all unfortunately the same height due to the dual restrictions of economics and the city's famed height limits, and therefore it's hard for any to stand out. The combination of green-tinted glass, and forest-green steel cladding make it one of the most elegantly designed and modernist of any downtown highrise  and Cesar Pelli he took his visual inspiration from the Hallidie Building. It's minimal, with just that grid of dark lines to distinguish it, and it's just as rectangular as the legion of other buildings for blocks around it, but it succeeds in standing out from the rest because there was some actual, thoughtful design behind it.  Jay Barmann 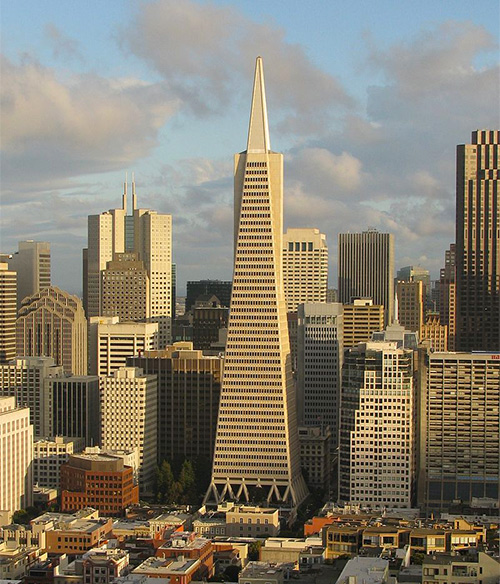 The TransAmerica Pyramid
It's bizarre to think that the relatively modest-seeming height of the TransAmerica building (48 stories, 853 feet) made it once the eighth tallest building in the country, right after it was completed in 1972. But it was, and it was also a source of great consternation among NIMBYs and Philistines when it was first proposed and built, all of them thinking it was hideous and nicknaming it "Pereira's prick" after architect William Pereira (good thing we're getting that more Phallic-ly shaped Salesforce Tower!). Now we think of it as the most iconic of all San Francisco's high-rises, and the most essential and recognizable element of our skyline. John King wrote in 2009 that it's "an architectural icon of the best sort  one that fits its location and gets better with age." Also, it has a pretty beacon at the top that they only light up at Christmas these days (and the anniversary of September 11), which partly inspired Armistead Maupin to compare it to the pyramid of Atlantis in Tales of the City. "Don't you know what dominated the skyline of Atlantis, Edgar... the thing that loomed over everything?" says Anna Madrigal. "A pyramid! An enormous pyramid with a beacon burning at the top!" Jay Barmann 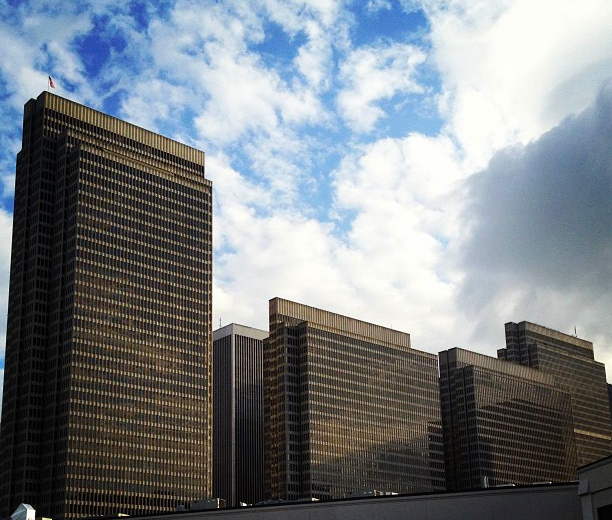 Embarcadero Center
Anytime anyone wants to hate on Brutalism, I point them to the four buildings of Embarcadero Center, a beautiful matched set of modern concrete objects that are best when seen from the water, or walking along the Embarcadero from Fisherman's Wharf. Built in phases between 1968 and 1983, the complex was designed by architect John C. Portman, and the narrow profiles of each tower show a striking, asymmetrical set of columns of different heights and step-backs, smashed together like a group of thin books standing on end. It's an elegant solution to the use of concrete in framing such imposing structures, with vertical lines that emphasize sleekness over weight. And the grouping, with the two tallest towers on the outside, is elegant as well, making this less of a wall hitting the Embarcadero and more a wave of distinct pillars. It's the austerity and cement-grayness of the 1970s at its most sublime.  Jay Barmann (Photo: Gerard Livernois/SFist)

At Bloomberg's Next Big Thing conference in Sausalito today, local billionaires Ron Conway and Chamath Palihapitiya got into a shouting match about how to solve San Francisco's housing crisis, and whether Mayor Ed

As we learned last month, 50-year-old Intersection for the Arts, San Francisco's oldest alternative-arts organization, is in a crisis, and its former executive director says the problem is structural. If the organization fails

—
San Francisco's Best Skyscrapers (And One Fogscraper)
Share this