It's happening. Once again it's Pride Month, and soon it will be Pride Week, and for the tenth year running local drag star Juanita More will be throwing her big end-of-the-weekend bash, which kicks off just as the parade is winding down on Sunday, June 29 at Jones.

SFist chatted her up this week to get a bit of the lowdown about this year's big 10th anniversary event, and to ask about how she scored Uber as a Diamond Sponsor this year  suffice it to say it had a little to do with a few drag queens around town, herself included, getting snubbed by Uber drivers once or twice and not taking it quietly.

Tickets for the party are still available, but online sales have already ended. $30 pre-sale tickets can be purchased a Sui Generis in the Castro (2231 Market), Hooker's Sweet Treats in the Tenderloin (442 Hyde), or Retro Fit in the Mission (910 Valencia). See also this profile from 7x7 in 2013.

Tell me about this year’s Pride party. How will it be different? How will it be the same?
As this year’s event celebrates its 10th Anniversary, I am still humbled by the love and gratitude our community has for this party. Indeed, I am proud it’s been a vehicle that has supported the Tenderloin AIDS Resource Center, The Harvey Milk City Hall Memorial, Transgender Law Center, Bay Positives, GSA Network, The SF LGBT Center, outLoud Radio, and now, The AIDS Housing Alliance. In many ways the party itself is the same. After 22 years, I am blessed that "the same thing" is working for me. When you do what you love it shows. This party is looked at by many as simply the 'best party of the year' and, now that I'm actually saying that, it sounds like a lot of pressure. Thankfully I don't do this alone. I’m grateful to have such an amazing Pride Committee that believes in my vision. It also doesn't hurt that I have so many talented friends that want to be a part of the event and make it a success.

Who’s this year’s charity beneficiary?
There are a few non-profit events that happen the weekend of Pride. Times are hard in San Francisco and the challenges of producing this type of event are daunting. I want people to support something important to our community  but in a way that feels effortless and fun. I’ve sat through too many stale dinners and speeches in my lifetime. This year, the beneficiary is AIDS Housing Alliance/SF, and fittingly so. The important work that AHA is involved in couldn’t be more relevant to San Francisco’s current socioeconomic climate. Rents are skyrocketing and many seniors, people with AIDS and people with disabilities are being displaced by the Ellis Act. I live in a neighborhood where I am confronted daily with a constant influx of homeless LGBTQ youth looking for shelter and assistance. I am proud of the accomplishments of the AIDS Housing Alliance/SF over the last decade and honored to raise funds to ensure their continued success in our shared pursuit of housing equality.

How many tickets do you usually sell?
We always hope to sell a lot of tickets. The capacity at the venue Jones reflects the number of tickets I can sell in advance. Without jinxing the event from getting shut down we more than double the capacity. This year we have three local stores carrying tickets - Sui Generis Consignment, Retro Fit & Hooker's Sweet Treats. We consistently sell out of pre-sale but always hold tickets at the door so, in reality, we never sell out.

How long have you known Jake Shears?
I met Jake Shears 10 years ago when the Scissor Sisters were just starting out as a trio. They performed at (the newly named) T-Shack. Even then Jake possessed all signs of being a superstar. Over their 10 years of constant touring I got a lot of chances to follow the Scissor Sisters around the country and host after-concert parties. We've had a lot of fun together! Though I must admit I really fell in love with Jake when he was in San Francisco working on the musical of Armistead Maupin's Tales of the City, through which I got to see his passion for a story that I grew up being so attached to. Jake took great care of employing his music to capture the series’ distinct magic about growing up in this mythical city. I wish he would record all of the songs and release it as a soundtrack album.

And Uber is a sponsor? I gather you had some words with them this year. What was that all about?
I'm proud that this party has solely been supported by local businesses and, ultimately, very pleased that Uber has agreed to be a Diamond sponsor for the event this year. All proceeds (including the entirety of Uber's sponsorship fee) will go directly towards supporting AIDS Housing Alliance. I have been an Uber rider for a number of years and made it a point this year to open a dialogue with them regarding their support for the LGBT community in San Francisco, including training their drivers to respect differences in gender identity and expression they may encounter among their riders. Through this conversation emerged Uber's sponsorship of my annual Pride party. With all the talk of the tech sector driving the affordability crisis in San Francisco, I saw a perfect opportunity to get support from Uber which would benefit a great organization that helps people living with HIV/AIDS avoid displacement. They have already made a generous donation directly to AHA and have created a partnership where new riders can basically rider for free by signing up with the code JUANITAMORE and get $20 off their first ride. For every new rider, Uber will donate $10 to AIDS Housing Alliance.

This is the 10th anniversary of this event. What’s your favorite memory of Pride parties past?
One of my favorite memories of this party is hands down the first year The Cougar Cadet Drum Corps performed. I had just seen them play the previous weekend while I was leaving the Farmer's Market at Embarcadero Center and asked their director how I could support the kids with hopes of having them be a part of my event. He said they were in the process of raising funds to buy a bus to get around town so I gladly replied I would help. I called up one of my potential sponsors that year, The Puccini Group, and asked them if they would donate directly to The Cougar Cadets. Well, they did! Their performance that day was absolutely thrilling and gave me chills. Those kids took the party to another level and lifted everyone up. They have since become a highlight at this event and I could not be more gracious about them performing.

Besides your own party, what’s your favorite part about Pride weekend?
My favorite thing about Pride in San Francisco is when the rainbow flags go up on Market Street. Today as I was walking Jackson they were proudly waving in the air. Even in our ever-changing city this simple but powerful display makes me so happy I live here. 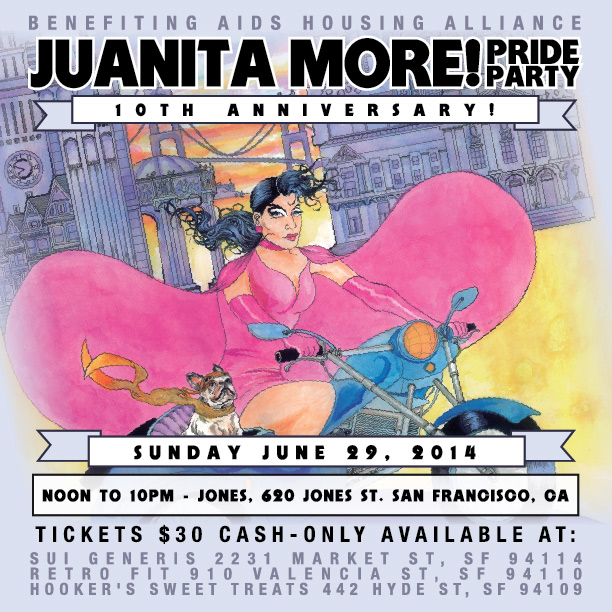 Though the host committee for Super Bowl 50 has touted $40 million in private gifts to support the event, none of that money will go to pay San Francisco's costs as (ostensible) hosts