The innuendo surrounding Snapchat's rise to ubiquity always veered towards conversations of sexting and deleting the evidence. Unfortunately for Snapchat's CEO and co-founder Evan Spiegel, there wasn't a similar feature for emails sent to his Stanford fraternity's mailing list. Suddenly the obsession with the ephemeral makes sense.

Before going on to found Snapchat, the 23-year-old Spiegel was a member of Kappa Sigma at Stanford University. The chapter had its own history of misbehavior that you might be able to predict from repeated viewings of 80s comedies, but emails sent by Spiegel to his fraternity group—and leaked today to Valleywag— reveal a college kid preoccupied with getting laid, doing coke, feeding girls alcohol and in one case urinating on female classmates.

You can read the whole series of leaked emails over at Valleywag, but just one is enough to get an introduction to college-age Spiegel: 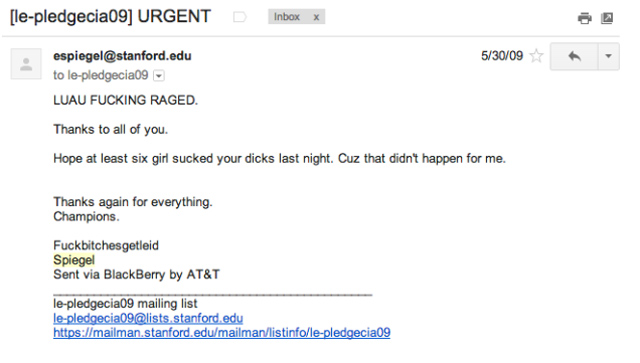 Meanwhile, TechCrunch writer Jordan Crook, who has known Spiegel in a more professional capacity goes on to confirm a gut feeling he's had for some time now: "Dude's kind of a dick." As Crook points out, Spiegel is obviously savvy enough to avoid dropping such boneheaded language in front of a reporter, but even his conversations about his current company tend to focus on his massive ego. It's "the same tone," Crook says, "paired with different, more disgusting imagery."

Snapchat was admittedly never the most wholesome-seeming app, but as the company looks to capitalize on a $2 billion valuation, having a recklessly rich playboy at the helm can't bode well for the company or the reputation of young tech CEOs in general.

This summer, several of San Francisco's elected officials will get a 2.6 percent raise! Here's what some of the folks you see in the news will be making starting July 1, in