Dining out is a notoriously expensive endeavor in this town, where even food truck menu items and those famous Mission burritos are starting to feel pricey. Luckily, San Francisco is more than just expensive high-end food or overpriced low-end fare. Here now, are our eight favorite menu items, all priced under that magic $7 price point.


Banh Mi at Saigon Sandwich
At the undisputed king of Vietnamese sandwiches, lunch can still be had for mere pocket change, despite rising prices. BBQ Pork is the standard order here, but anything on the menu will only run you $3.75 (or $4 if you splurge for the combo with a slathering of pâté) and comes stuffed on a French baguette with the usual accoutrements of pickled carrots, jalapeños, and cilantro. —Andrew Dalton
560 Larkin (between Turk and Eddy) 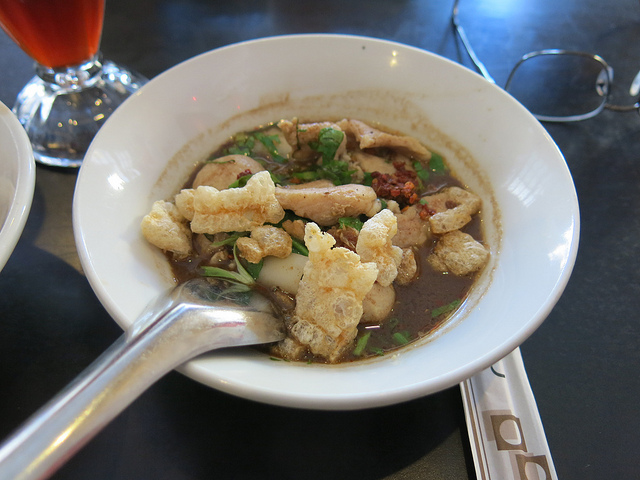 Boat Noodles from Zen Yai Thai
One of the few things that can effectively clear out a fog-brained hangover, the Boat Noodles at Zen Yai in the Tenderloin contain some life affirming stuff. And that'd be the blood that lends the broth its murky, reddish richness. The noodles themselves are the flat, wide sort and you'll be surprised at how much veggies and meat (pork or beef) they're willing to pack in a bowl of soup that only costs $2.50. At this price, a second bowl is cheaper then another bottle of Singha. (Oh, and don't look for them on the English menu, because you'll only find them on the "secret" menu written on the wall in Thai.) —Andrew Dalton
771 Ellis (at Polk) 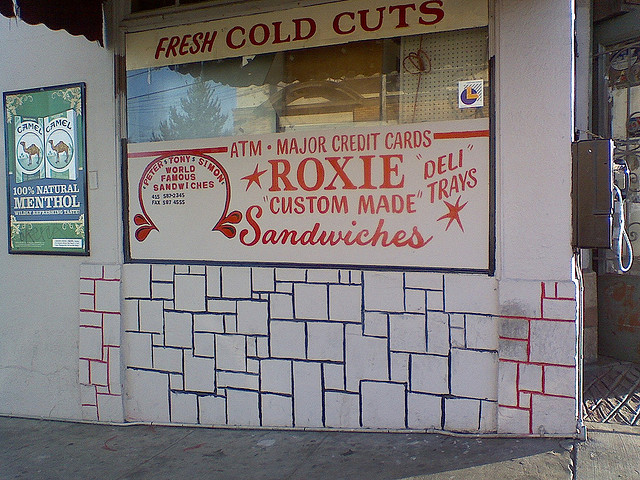 Any Junior Sandwich at Roxie Food Center
Roxie's makes one of the, if not the absolute best sandwiches in San Francisco. They're all priced the same, regardless of if you're seeking ham or meatballs or a veggie: $5.99 for a junior, $7.99 for a regular, and $11.99 for a supreme. And I'm telling you right now, a junior is junior in name only—this thing is a two-hander, quality bread packed with meat, veggies, and cheese. Service is fast, efficient, and friendly, with substitutions and omissions handled without a flaw. If I was ever convicted of a horrible crime and sentenced to death, a junior hot veggie (soft roll, provolone, no onions, extra pickles) would be my final meal. You're welcome, taxpayers! — Eve Batey
1901 San Jose Avenue (between Havelock and Santa Ynez)
(There's also a Roxie's at 500 Kirkham Street between 9th and 10th Avenues, but it's not as good. Make the trip to San Jose Ave.) 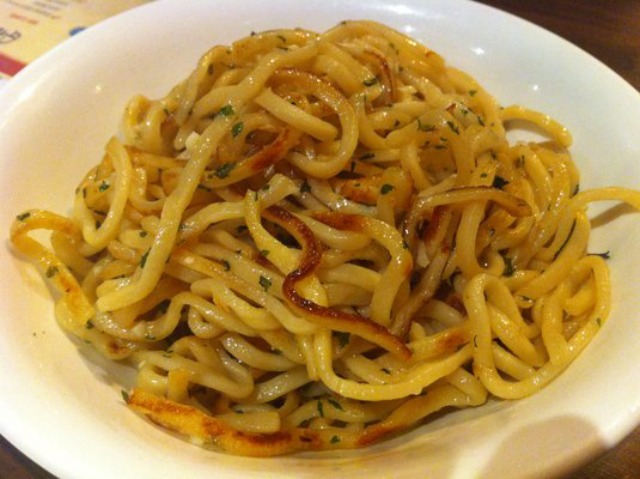 Perilla's Garlic Noodle Bowl
The folks who own Perilla also own both PPQ Vietnamese places in town, so you know they have garlic noodles down to a science. While you can get the noodles topped with meat or veggies, sometimes a simple bowl of noodles ($6.50) is all you need. Order them in-house, or take them to go and watch the dish expand (there's a lot of food packed in there!) as it's liberated from the carryout container. The knotty noodles demonstrate just the right ratio of butter to garlic, which means you might not be especially kissable tonight, but no one will be leaning away from you by tomorrow morning. — Eve Batey
510 Mission (between Ecker Place and First Street)
863 Irving (between Ninth and Tenth Avenues) 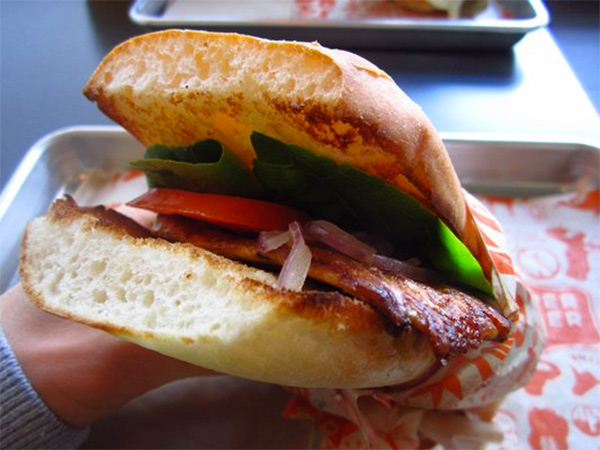 The Chicken Sandwich at Super Duper
A lot of people would argue that you don't go to Super Duper for chicken, and that the burgers, while greasy, are some of the most delicious in the city at this, our very own Shake Shack knockoff with extremely similar signage. But, as with many a burger in this town, the basic Super burger here starts at $7 before you add cheese and stuff (the 1-patty mini burger is still a steal at $5). So I thought I'd highlight the also excellent, and somewhat more diet-friendly chicken sandwich, which comes topped with chipotle aioli and your choice of an array of free toppings (including lettuce, tomato, red onion, grilled onion, jalapeno, and pickles) for $6.75. It's a juicy, well marinated piece of chicken breast served on a nice big bun, and if you manage to avoid the French fries (and who does that?) it makes for a decently healthy lunch.  Jay Barmann
Multiple locations 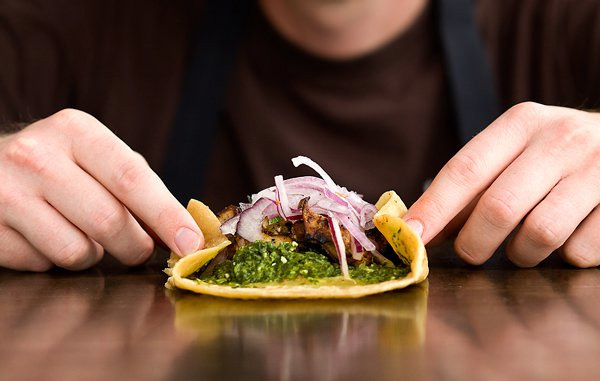 Kati Rolls at Kasa Indian Eatery
These Indian-style burritos on freshly made roti are one of the better deals in town, even though a single one for $5 might only constitute a snack for most adult males. They come stuffed with your choice of any of Kasa's well spiced and seasoned meat or veggie dishes, including their top-notch, smoky chicken tikka masala, the yummy keema muttar (spiced minced turkey with peas), or gobi aloo (cauliflower and potatoes), along with rice, onions, and chutneys.  Jay Barmann
4001 - 18th Street (at Noe) and 1356 Polk Street (at Pine) 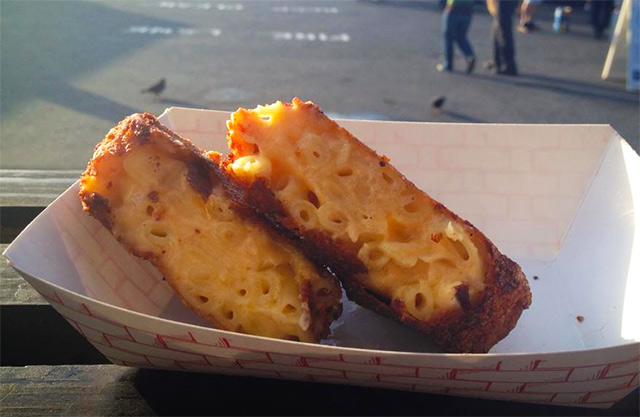 The Frankaroni at 4505 Burgers & BBQ
Certainly one of the most buzzed-about food destinations of the moment is 4505's new spot on Divisadero, where lines have been forming and brisket supplies running out on a daily basis since they opened. The barbecue here is undeniably delicious but does not come cheap (2-meat plates are $16 and a half pound of top-notch smoked pork shoulder is $9), and the signature cheeseburger starts at $8.75 for a single, $13.75 for a double, without bacon. But you can easily make a meal out of the amazing deep-fried mac-and-cheese cake known as the Frankaroni ($5), which is studded with bits of 4505's own bacon-studded hot dog. And you might want to add some chimichurri fries to that ($5). It's the kind of food that makes you feel like a kid again, and thus they've been running out of the Frankaroni pretty regularly too.  Jay Barmann
705 Divisadero (at Grove) 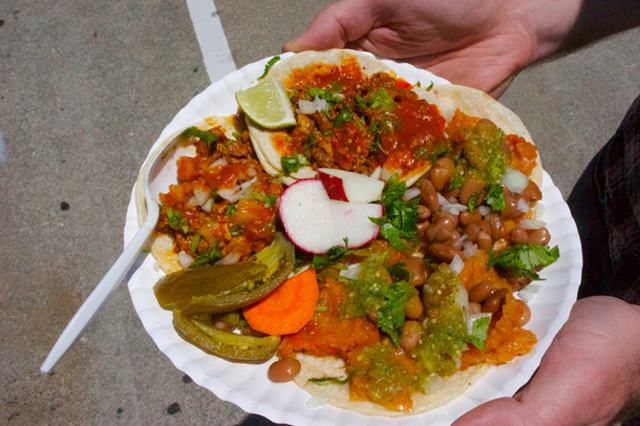 Tacos from Pretty Much Anywhere
No list of cheap eats in San Francisco would be complete without a mention of our city's storied taqueria fare. We heartily stand by last year's Best Tacos list, but take note that if you're spending more than $3 per taco, you're no longer in "cheap eats" territory and you are now splurging on fancy tacos. For the best places to stretch your hungry dollar, head to Taqueria Vallarta, La Taqueria and the Gallo Giro Truck.

Taking over the former Nettie's Crab Shack space at 2032 Union Street is a new island-themed concept, Palm House, which debuts tonight after some considerable renovations. The team behind it includes Gayle Pirie,

No, they didn't menace Laura Dern, nor did they refuse to hold on to their butts. But remember how the fine scientists of Jurassic Park claimed that they had taken clever steps to

—
The Best Cheap Eats In San Francisco Under $7
Share this