Although you see many A's caps around town and can't help but notice their green-and-yellow costumery while riding BART, this map says there are basically no A's fans in the Bay Area, not even in Oakland. Huh. The NYT Times used aggregated data pulled from Facebook "to create an unprecedented look at the geography of baseball fandom, going down not only to the county level, but also to ZIP codes." Zip codes in Oakland show a strong preference for SF over Oakland. In fact, the A's don't even register on the nationwide map: 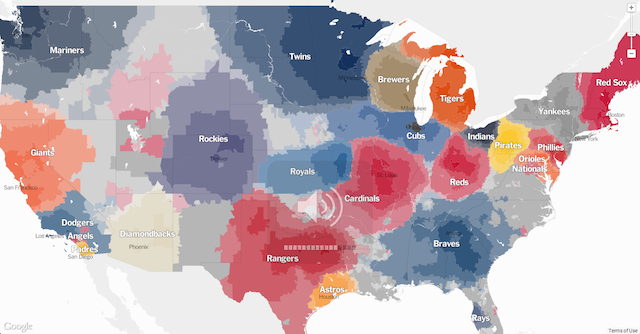 The NYT explains the jarring Giants bias is due in large part to two recent (and quite glorious) World Series wins. "Like the Mets, the Athletics are the less popular team in a two-team region — less popular everywhere in that region, based on the data from Facebook. Again, winning the World Series matters. The Giants have won two of the last four. The A’s have won none of the last 24."

While noting the 2010 and 2012 championships as one explanation why A's fans might be fading, noted A's zealot Gunnar Hissam (partner / owner of Om Records) gives us another: "One reason fans might be dwindling is that owners John Fisher (absentee) and Lew Wolff (real estate tycoon and face of the team, when he's not down in LA going to Dodgers games) are complete clown asses and shit on the fans. The stadium is a dump, they refuse to fix it up, they want to move to San Jose, they don't respect Oakland or the history. They're just in it for the money." 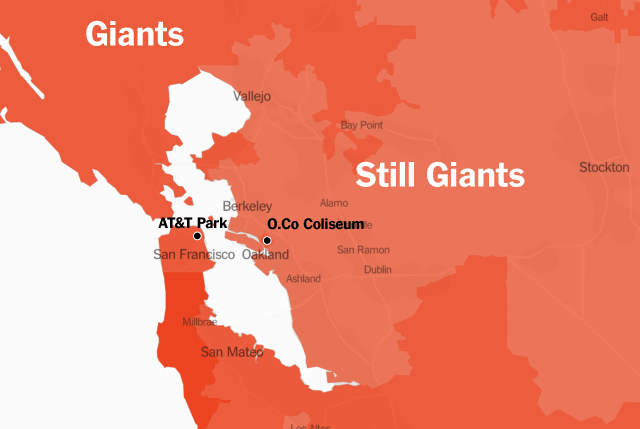 Another oddity is San Luis Obispo. The town always been considered the dividing line between the Giants and the Dodgers, right? Not so, says the map. As the NYT points out, SLO "is squarely Dodgers territory." (Zac Efron, an SLO native, revealed himself to be "a serious Giants fan" in a 2008 interview. So brave of him to come out as an SF fan while coming from such a backward city!) While the Giants have major presence throughout Northern California, Tulare County acts as the real Mason-Dixon line in the Great Giants-Dodgers War. 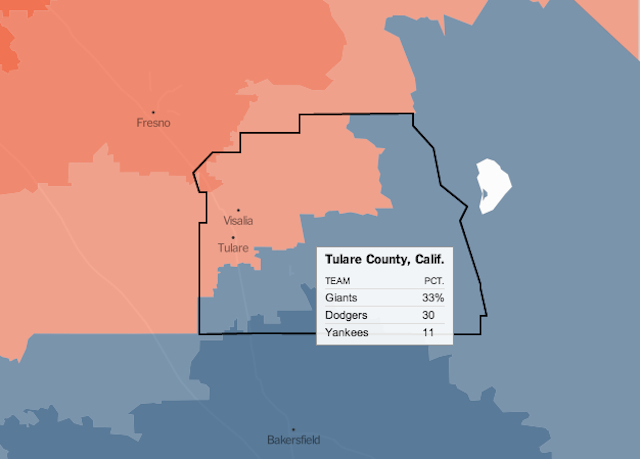 And, yes, you're probably right. This fandom map could be miles away from the real makeup of MLB fandom. (It also claims that NYC basically has no Mets fans.) To find out more, we asked platinum Giants fan Grant Brisbee of McCovey Chronicles

"It's hard to know exactly how closely Facebook likes mirror reality. You would think Facebook skews a little younger, and this is trying to measure a sport whose fans skew a little older," Brisbee explains. "I will say that I'm dubious. I live about 10 minutes from the Oakland Coliseum, and I see plenty of A's gear. It's at least a 50/50 split between Giants and A's apparel, and that's being conservative. And you know that famous saying, 'Anecdotal evidence is far, far better than aggregated data.' "

Just as that compromise legislation regarding short-term rentals like Airbnb makes its way through Board of Supervisors approvals, City Attorney Dennis Herrera is taking two landlords to task for doing something the new

After some handwringing that Sir Paul might bring his summer tour to Santa Clara, Macca has announced he'll get back to Candlestick Park to close out the stadium and his "Out There" summer

—
Map Says There Are Hardly Any A's Fans In The Bay Area, Even In Oakland
Share this