After 126 years spent sitting on the sea floor just outside the Golden Gate, the wreckage of San Francisco Bay's second worst maritime disaster was found by a crew of National Oceanic and Atmospheric Administration. The SS City of Chester was headed out from San Francisco to Eureka, California in 1888 when, in the midst of a thick fog, it was struck by an immigrant steamer twice its size. Sixteen people, including three children, were lost in the wreck.

The City of Chester stayed afloat for six minutes after being impaled on the bow of the immigrant steamer Oceanic, arriving from Asia. Although seas were calm at the time, there was a rip current off of Fort Point, which affected the ships' abilities to maneuver. The two crews spotted each other when the ships were about half a mile apart, but neither could change course in time.

Local newspapers originally blamed the tragedy on the Oceanic's Chinese crew, saying they stood by while passengers on the Chester drowned. After an investigation, however, later accounts revealed that Oceanic's crew did, in fact, act heroically, with some crew members diving into the water to save a drowning child. After the collision, the Oceanic's captain kept the ship moving forward in order to plug the nearly 10-foot gash in the Chester's hull. According to the NOAA's local maritime heritage coordinator, members of the Oceanic's crew reached down into the ocean to help pull survivors onto their ship.

"Discoveries like this," James Delgado, the NOAA's director of maritime heritage said, "remind us that the waters off our shores are museums that speak to powerful events, in this case not only that tragic wreck, but to a time when racism and anger were set aside by the heroism of a crew who acted in the best traditions of the sea.” 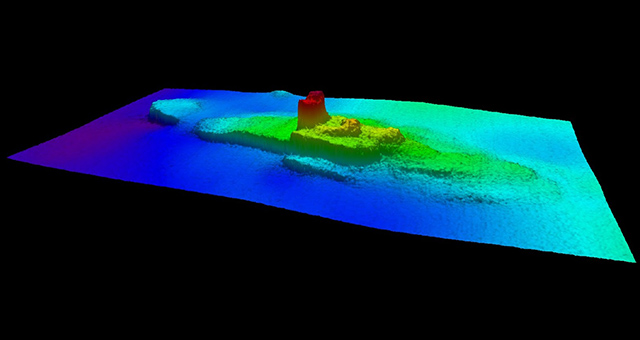 The NOAA crews first spotted the wreckage using a multi-beam sonar survey last year, but spent the next nine months sorting through data before confirming that they had found the SS City of Chester.

The worst maritime disaster in the Bay happened back in 1901m when the SS City of Rio de Janeiro, an iron hulled steam powered passenger ship, sank after colliding with a submerged reef at the entry to the Bay. Of the 220 passengers and crew on board that ship, fewer than 85 survived.

A sonar-generated view of the SS City of Chester. (Photo courtesy: NOAA Office of Coast Survey)

Prince F. Tsetse, 40, was charged with murder this week after allegedly beating to death Kimberly Robertson, 23, during a sexual assault inside his SUV. Robertson's body was discovered earlier this month at