A three-alarm fire has broken out and spread to at least two residential buildings on Walter Street off of Duboce Park. Emergency_In_SF reports that the roof of the building that originally caught fire has collapsed. The fire was originally reported as two-alarm as of 1:42 p.m.

We'll update you as we learn more.

Update: ABC 7 reports that no injuries have been reported yet, and the 22-Fillmore bus has been re-routed.

And Haighteration is reporting that the fire may have spread to three buildings in total, and they're checking on a fourth.

Update 2:35 p.m.: KTVU has some raw News Chopper footage that you can see below (turn the volume down!) showing the fire as it began on the top floor of the original building.

Update 2:53 p.m.: CBS has some live footage showing the mostly extinguished fire, with firefighters still putting out hot spots. It appears that the second building, to north, sustained some damage at the upper level and roof. Haighteration reports that the fire was under control as of 2:43. 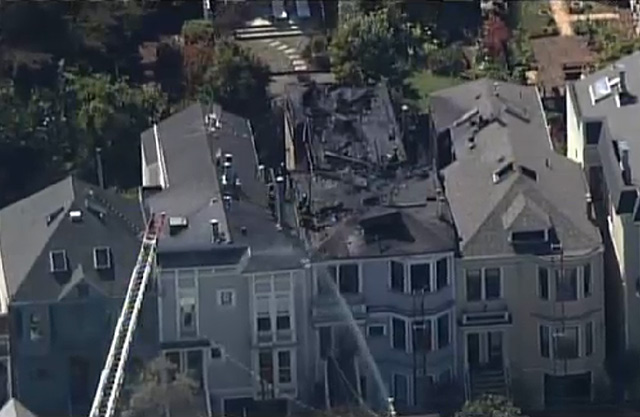 Update 5:00 p.m.: A Castro Biscuit reader sent in this photo of the damage at 34 Walter Street as seen from the rear.

From one of our readers. The view of the aftermath of the 3-alarm fire earlier in Duboce Triangle. pic.twitter.com/HC4DV6LpcL

Though the San Francisco Green Film Festival doesn't kick off until the end of May, you'd be very silly to think that they'd let Earth Day slide by without some sort of event.