Is it just because she's a woman? Is it because she has "soft skills" like design and marketing that Google doesn't necessarily need? In any event, the saga of "Amy" has the tech world abuzz, because not everything in Silicon Valley circles is all positivity and windfalls of cash. (And hopefully Mike Judge's new comedy on HBO will help to make light of some of that darkness.)

A week ago, the anonymous woman who New York Mag is calling Amy, posted this to Secret, the app where anonymous users post vague secrets about themselves or their friends, out of cruelty, or catharsis: 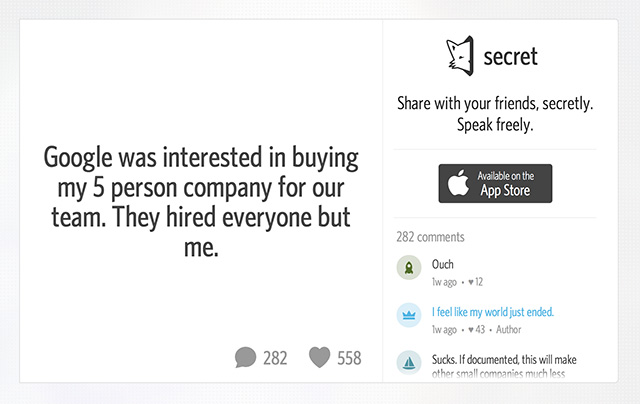 What followed was a flood of anger and support and commiserating from others in similar positions, and ultimately the story gets picked up by Kevin Roose, the same NY Mag scribe who recently so enjoyed poking fun at S.F. for being a land of pricks and reluctant millionaires. He gets Amy on the phone, confirms her story off the record, and listens to her tale of woe: The five-person company's big plans didn't really pan out, they decided to sell themselves to Google as a last resort, and Google did what was called an "acquire-hire" of everyone, except her, giving her male, engineering counterparts and her former CEO big signing bonuses and $250,000 salaries. The deal paid out the company's original investors, and gave lump sums of $10,000 to each employee. So, she was left, humiliated, with $10,000, after bragging to all her friends that her company was getting acquire-hired by Google.

Roose concludes that this is really a story about Secret, and its current role in the Valley's universe.

In any case, Amy's post has quickly proven that the Secret app - which is something of a lightning rod among tech types - has a function in Silicon Valley. By enabling its users to speak up anonymously about workplace drama and boardroom betrayals, the app breaks down some of the Valley's positive-thinking force field. Amy's Secret post has 246 comments and 536 "hearts" as of yesterday, and has inspired messages of support as well as anger. ("Your cofounders are douchelords," one commenter wrote. "Don't give up, fight for your fair share," another wrote.) She's also gotten offers to help her find other work in the tech industry and has heard from entrepreneurs who say they'll think twice before selling their companies to Google.

And so a quiet Silicon Valley soap opera plays out. Will she sue? Can she sue? Was she just not "Google material?" (Ugh.)

Al Qaeda's english language publication with an in-flight magazine name Inspire, raised some flags in Washington, D.C. this week after it ran a spread featuring man sitting on a tram car from

Prompting a barrage of uninspired "32nd flavor" puns from local media outlets, a rather inspired Belmont Baskin Robbins employee was busted this week for selling marijuana on the job. Which makes sense since