Super Bowl Sunday is almost here. Though some of you are still sore from the 49ers NFC Championship Game loss, the game must go on. If you plan on watching the game, as you very well should, here are our favorite spots for wings. Failing that, we have a couple of other options as well.

Wing Wings
If the name didn't tip you off, Wing Wings in the Lower Haight has a pretty narrow menu focus, but they are totally serious about their chicken knuckles. With nine rubs or sauces to choose from, you can piece together an impressive spread from their takeout menu. (The traditional Buffalo style are a crowd pleaser, but the dry rub and the Angry Korean are also big winners.) Round out the feast with Old Bay-seasoned fries, macaroni salad and an order of fried Oyster mushrooms. Pro-tip: On big game days order around kickoff time and your goods will arrive, bike courier-delivered just before the half. — Andrew Dalton
422 Haight (between Webster & Fillmore) 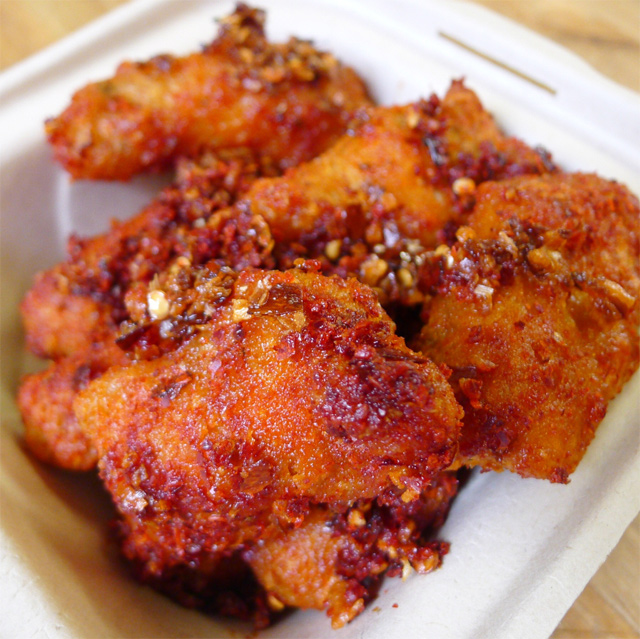 Hot Sauce and Panko
One of several spots in the city focused on wings and only wings, this outpost in the Richmond is a wing-lover's dream. They offer a dozen varieties of expertly fried and coated wings, including sticky pepper with garlic, Kentucky-yaki (bourbon and terikyaki), Old Bay with Sriracha caramel, hot chili crunch (pictured), and the namesake Panko 2.0, which is drenched in tonkatsu sauce. The only other things they serve are fries, and a couple of sandwiches with fried chicken karaage (and one with fried cod). Do note that they keep slightly odd hours (noon to 6:30 Wed-Thur and Sat, noon to 7 on Friday, noon to 5:30 on Sunday, closed Monday and Tuesday). But you can order wing delivery via Postmates, so that's nice. — Jay Barmann
1545 Clement Street (at 17th Avenue) 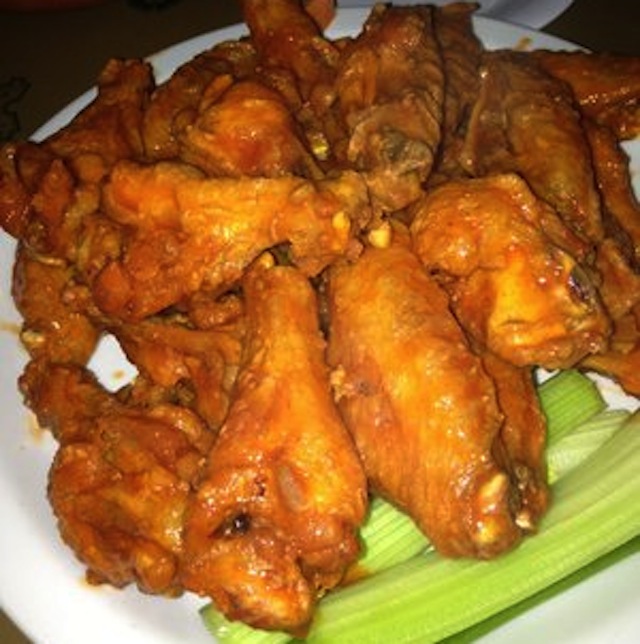 Kezar Pub
Long known for being one of the few places open early enough to catch live European soccer matches, Kezar's other claim to fame is their buffalo chicken wings. We're not sure what sort of mutant chickens they get their wings from, but they're simply massive. Burgers, garlic fries and other greasy items will help soak up the beer you're drinking by the pitcher, just remember to show up early (like real early) if you want a table. If things look too packed, try their sister bar Mad Dog in the Fog in the Lower Haight. — Andrew Dalton
770 Stanyan (at Waller) 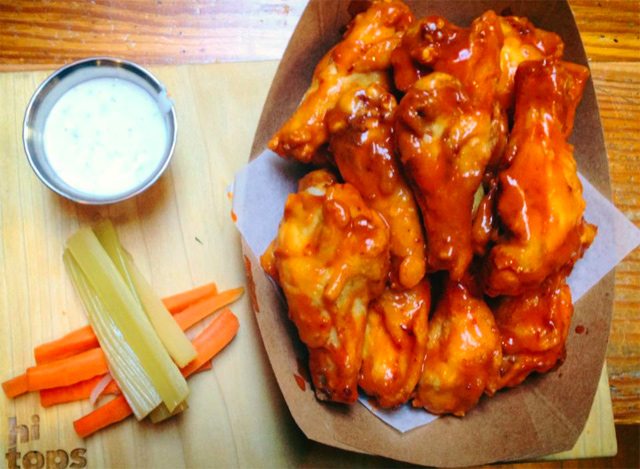 Hi Tops
Among the many things that the Castro's popular, one-year-old sports bar does well are their tangy and spicy Buffalo wings. They come well drenched with house-made Buffalo sauce, which is not extremely spicy but super rich and dare we say complex, with a choice of ranch or blue cheese on the side. And as an added bonus, they come with some great pickled carrots and celery to cleanse the palate. — Jay Barmann
2247 Market (at Sanchez) 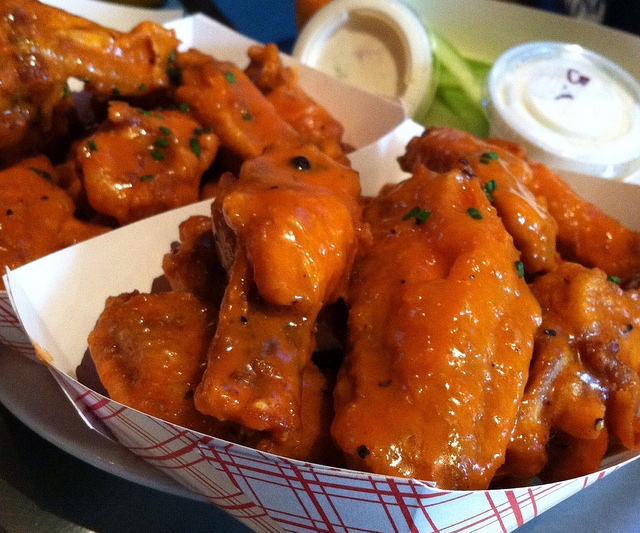 Giordano Bros.
You can get your wings BBQ or Buffalo style at this popular sports bar with Mission and North Beach outposts, but we'd recommend the nicely spicy Buffalo ones. The come dusted with some chives, all classy like, and blue cheese on the side. And you should note that you can ask for wing sauce on your sandwiches here for an additional 50 cents. — Jay Barmann
3108 - 16th Street (at Mission), and 303 Columbus (at Broadway)

And because wing aren't everything, Rose Garrett has a couple of other ideas... 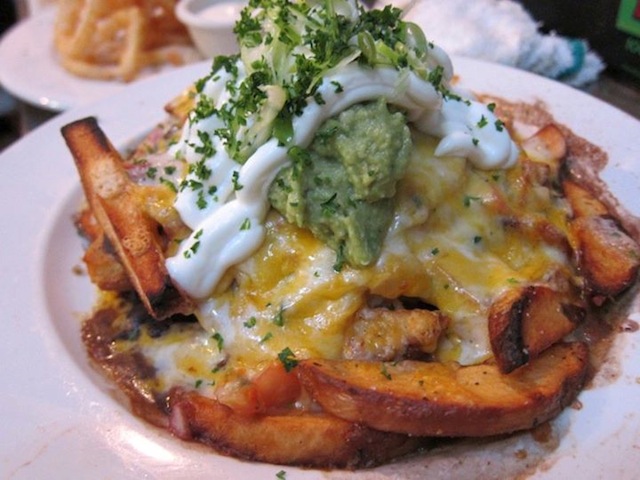 The Phoenix
Though it's located in the heart of the buzzy Valencia strip, The Phoenix is no trendy johnny-come-lately, but rather a classic Irish pub with a solid sit-down menu and plenty of screens to catch the game. Shepherds pie, bangers and mash, and homemade Irish Colcannon with caramelized onion, kale, buttermilk mash and grilled Irish bacon join pub grub standbys like onion rings, spicy chicken wings and the Phoenix's signature Irish potato nachos. — Rose Garrett
811 Valencia (between 19th Street & Cunningham Place) 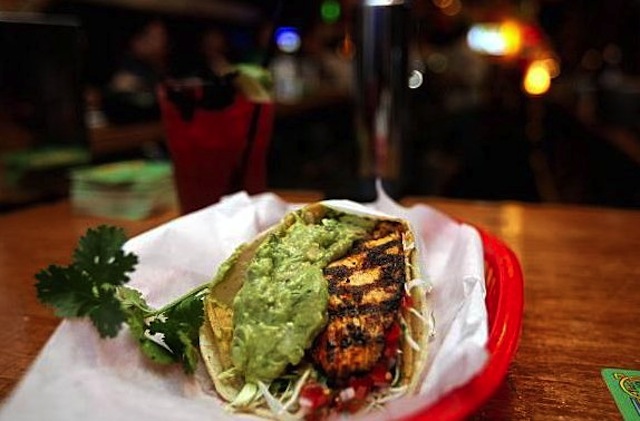 The Taco Shop at Underdogs
Tacos may just be the chicken wings of the west, and The Taco Shop delivers them in appropriate fashion. A spinoff of Nick's Crispy Tacos, this menu has modern classics like baja fish tacos or carne asada served "Nick's way" with a grilled crispy corn tortilla wrapped in a soft tortilla with Monterey Jack cheese, pinto beans, pico de gallo and lots of guacamole. Pair that with a beer and stool at the bar to watch the game, and you've got a winning combo. — Rose Garrett
1824 Irving (at 19th Avenue)

[UPDATE: SFist interviews KitTea co-founder Courtney Hatt.] This isn't a joke. You're not dreaming. It's real, and it's mew-tacular. A tea cafe featuring a bevy of therapeutic, adorable cats is set to open

You've been preparing for this day since you saw your first Playboy, walked in on your older brother doing ... something, and had your first awkward one night stand. Now, it's finally time for

—
Just In Time For The Super Bowl, The Top 5 Wings In San Francisco
Share this