That's all, folks. 2013 has come to an end. And with that, here are the best moments of 2013, at least according to the SFist staff. Feel free to add yours.

The Castro, June 26th
Everyone was ready for a protest, if it had to go that way, but they were prepared for a party, too. Signs went up a couple weeks before saying that the stages were ready to be set up whatever the day the Supreme Court finally issued its decisions on DOMA and Prop 8. And even though this was, actually, the third or fourth time in the last ten years that we had all celebrated a victory for gay marriage in San Francisco, it was going to be one of the last  the final-final being when SCOTUS finally gives us federal marriage equality, which is feeling closer every year, but could also be quite a few years away. The bars were packed. The streets were packed. People were carrying children and dogs aloft. By Friday, there would be gay marriages again City Hall. And it all came just days before the city was getting ready to ring in Pride, as LGBT tourists were already streaming into town. It was, easily, one of the most joyous and drunken weeks in recent memory, and definitely the most joyous of the year. — Jay Barmann

Naked BART Acrobat a.k.a. Yeiner Perez
At first, he was just a joke. Another loon let loose in our public transit system, naked and harassing people at 16th Street BART and isn't that hilarious. Then came the video, and oh shit this definitely crossed some lines in the assault category. But the agility! That body! This guy was not your run-of-the-mill lunatic but was clearly trained? Then came the fleshing out of the story: He's a trained clown and acrobat, Clowns Not Bombs, here semi-illegally on an expired visa from South America, and perhaps had some kind of mental break. Like, a serious mental break that was apparently temporary, but quite serious. Then there was a little jail time, and finally, by October, he was released on his own recognizance and everyone hopes he's getting help. Anyway, thanks for the national headlines, naked BART guy. You were fun/scary. — Jay Barmann

Prancercise
Never doubt the power of YouTube to change lives. A simple little exercise video, set to some Creative Commons tunes, featuring a unique new mode of low-impact exercise invented by Floridian Joanna Rohrback, brought us all hours of pleasure (and laughs), and vaulted Joanna, unwittingly, into the national spotlight. Now she's made a video for John Mayer, and she landed a plum national TV spot for pistachios. In a word: awesome. And she should be an inspiration to all of us with harebrained projects we work on for decades and put our stamps on. They may still make us famous someday. — Jay Barmann

Bun Bun the Kitten Who Barks
If ever there was an internet moment that caught us a little off-guard, it was Bun Bun. The adorable little kitten appeared there on our screen one day, barking like an actual puppy and mincing for the camera, and immediately won a top spot in our year-end list of kitten videos. [Ed. Note: We have made no such list.] Could it be real, this kitten? Oh, but it could, and it was. Then George Takei found Bun Bun, and all of you found Bun Bun, and for at least a day and a half we all felt better about the world because of Bun Bun. And this is how viral videos work. — Jay Barmann 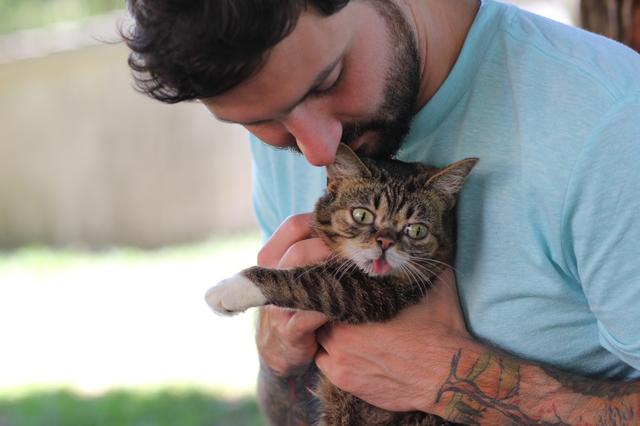 Lil Bub
Where Internet-famous cats are concerned, indomitable Eater SF editor Allie Pape is the expert, but I tagged along as photographer for her in-depth SFist interview with Lil Bub and Bub's (almost) equally adorable owner Mike, and lost my heart to this bug-eyed feline. Her fame is well-deserved. — Rose Garrett

Attempting to make the SFMOMA Mondrian cake.
I wanted to find out just how a home cook would fare with Caitlin Freeman's famous Mondrian cake recipe (you may remember it from the Blue Bottle cafe at SFMOMA). It took all weekend, but it turned out ... not a complete embarrassment! Try it at home at your own peril. — Rose Garrett 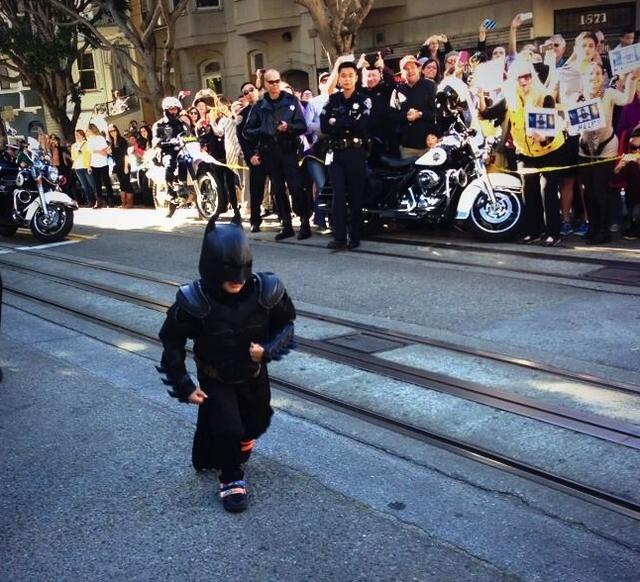 Batkid
By far, Batkid was a dream story for me. I couldn't type more than three sentences about Batkid without getting something in my eye. Chasing Miles around town to shoot photos and seeing the city come together to watch the whole thing was a blast. — Andrew Dalton

Baby Penguins
Attending fish school with five baby penguins was a definite highlight. You haven't lived until a penguin trainer picks up a downy penguin chick and plops it into your lap. Pro-tip: if you scratch them behind their neck they'll nuzzle you right back. — Andrew Dalton

Brian Boitano & Me
After starting to cook my way through Brian Boitano's cookbook as a joke, Brian eventually reached out to me on Twitter. He ended up coming to a dinner party we threw for him and later he let me borrow an old figure skating outfit for Halloween. In 2014, I think he's going to finally teach me to nail the triple lutz. — Andrew Dalton

The Battery
After everyone had spilled so much ink over this expensive club for techies, I finally got a chance to drop in for an SF Film Festival party. Of course I took the opportunity to wander around some places I wasn't supposed to be. I managed to check out the penthouse hot tub before I was hassled by the head of security while trying to check out the locker rooms. That's a metaphor for the growing class war, probably. — Andrew Dalton

How Stamos lost his cherry
That phone interview when John Stamos told me how he lost his virginity. There's nothing like getting some dirt on Uncle Jesse. — Andrew Dalton

The Niners... of course.
My best moment was the Niners beating Atlanta to go to the Super Bowl. My worst was flying to New Orleans to watch them lose in person. Those five yards will haunt me forever. Just RUN THE BALL. Also: I cried all day bc of batkid. Also part II: my new dog (see above). — Daisy Barringer 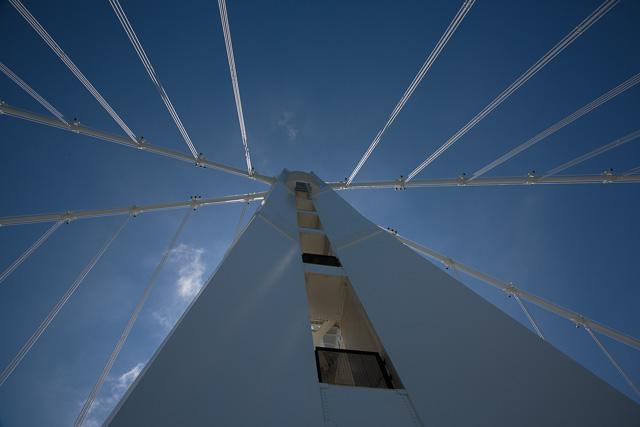 Peter Shih reaction
I liked the reaction to Peter Shih because I'm juvenile and he acted like a dick. So we're all the rest of them. — e. Chang

Births
My nephew was born this year and I took him to his first Giants game. That was the coolest. — e. Chang 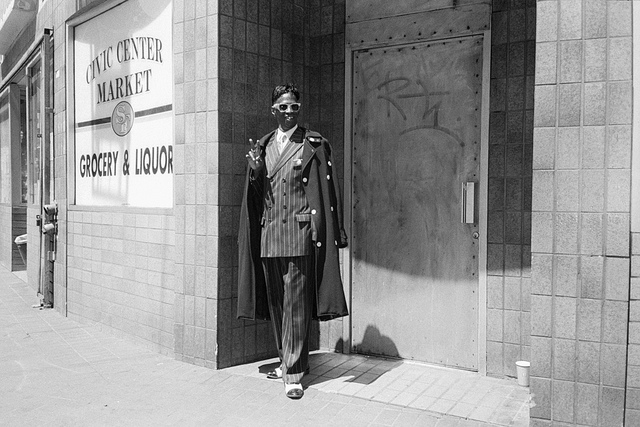 Denise Hale's educating new money in Vanity Fair.
Denise Hale came off gloriously in this Vanity Fair piece. We come back to it again and again when newfangled money or noted boaters irk me. Thanks for keeping it real, Denise. San Francisco has much to learn form you. — Brock Keeling

Mid-Market
Everything in, around, written about, and fretted over Mid-Market amused/concerned me. Deeply. Especially. — Brock Keeling

Beyoncé
I'm sure some stuff happened in 2013 (local and otherwise), but I cannot recall any of them because Beyoncé quietly released an album on an unsuspecting Thursday night, December 12. I've always enjoyed her, but now I get her. And unless the words coming out of your mouth are prefaced with "Let me sit this ass on you," I'm not interested in what anyone has to say, thanks to Bey. (Whatever. These ladies agree with me.) — Brock Keeling

As marijuana use continues to become more and more mainstream, the number of dogs who are accidentally getting high is also on the rise. And, contrary to what you thought in college, dogs

The final tally is in for the dozens of local restaurants being investigated for withholding money earmarked for employee health care. Under City Attorney Dennis Herrera's special enforcement plan, which offered 50 percent