In the Netherlands, everyone owns a bike. Here, just about everyone owns a car. Hence, when you look at a comparison of how many miles the average citizen cycled compared to how many of those citizens were killed in fatal accidents with motor vehicles, you find a clear correlation: You're more likely to spend time on a bicycle and way less likely to get killed on one in the Netherlands, but in the U.S., what few cyclists we have are in grave danger of dying.

This will come as nothing shocking to San Francisco's avid bicycling community, many of whom know all too well how uneducated many drivers are to the laws and how consequently dangerous the roads are for bicyclists.

According to a new report by the Organization for Economic Cooperation and Development, using data from a questionnaire that went out to the org's 34 member nations, Americans have the lowest overall bicycle usage among developed nations &$151; the average American travels by bicycle about 20 miles per year, most of us probably less than that. Meanwhile, the average Dutch person is on their bike all the time, traveling over two miles a day.

On average, 44 Americans are killed every year per billion of miles cycled, while in the Netherlands it's a fourth of that number, 10.7 killed in vehicle accidents.

Other factors come into play, of course  drinking and cycling is an issue. Of the victims who were tested for alcohol, about a fourth had a blood alcohol level of more than 0.08%, which would constitute a DUI if they were in a car. But by and large, the deaths are attributable to collisions with cars or SUVs, and in 17% of cases, those are hit-and-run accidents in the U.S.

68% of these crashes in the U.S. are blamed on the dead cyclist, however it stands to reason that some of those cases are probably incorrectly blamed on the victim, who isn't alive to tell their version of events, as The Wire points out. Drivers are charged with moving violations in about a third of cases, and they're blamed for some contributing factor in the crash in about half of all cases.

See the chart below. 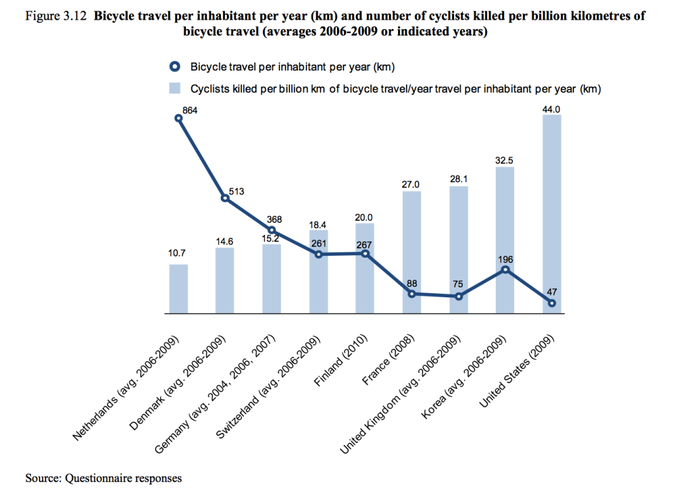 Update: Updated to clarify the statistics on alcohol-related bicycle fatalities.

All because of one of Stanley Roberts' annoying, finger-wagging "People Behaving Badly" segments for KRON 4, Carlos Santana has gotten back in touch with a down-on-his-luck former bandmate, a drummer nicknamed Marcus the

It's been a good run for San Francisco's elderly stadium, which after tonight's game will most likely pass on to become nothing more than a parking lot-shaped constellation in the night sky. But

—
Study Says U.S. Has Fewest Cyclists, But Americans Most Likely To Die Bicycling
Share this