On Monday, the San Francisco 49ers will play their last game at The 'Stick. Waterbar Pasty Chef Angela Salvatore marked the occasion with this sporty gingerbread stadium. Delightful.

The press release beams: "The gingerbread replica measures two by three feet and stands one foot tall. The park is decorated with candy embellishments and intricate details that make the model come alive. From the double decker stands to the mini gingerbread men playing football on the scaled field, the model won’t disappoint longtime fans."

I don't think it's possible to disappoint fans any further, Mr. Press Release. Initially built as the home to MLB's greatest baseball team (who played there from 1960 until 2000), the 49ers have called Candlestick home since 1971. Now they're going south to called Santa Clara. Alas.

Anyway, the gingerbread 'Stick will be on display beginning today, Dec. 19 through Dec. 31. Here's another view: 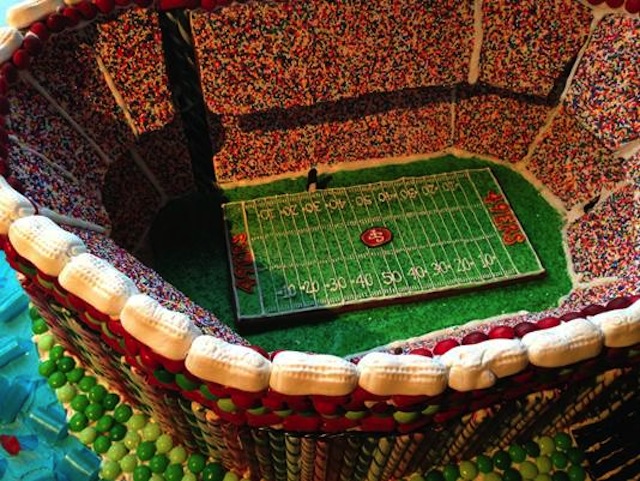 Every year Glide Memorial Church gives away over 5,000 bags of groceries to the needy in San Francisco, feeding literally thousands of people who would otherwise go hungry during the holidays. Unfortunately,