It's all relative, as the saying goes, and it's never been truer than with today's announcement that San Francisco has been crowned the "most bike-friendly city" in the nation. Or, as it could be called, the "most non-shitty" place to ride a bike around town.

The finding are based on data collected from the Alliance for Biking and Walking, and compiled by Statista, which found that, with 5.6 miles of dedicated bike lanes, multi-use bike paths and signed bike routes per square mile (263 miles in total), we've got the best biking infrastructure in the country. 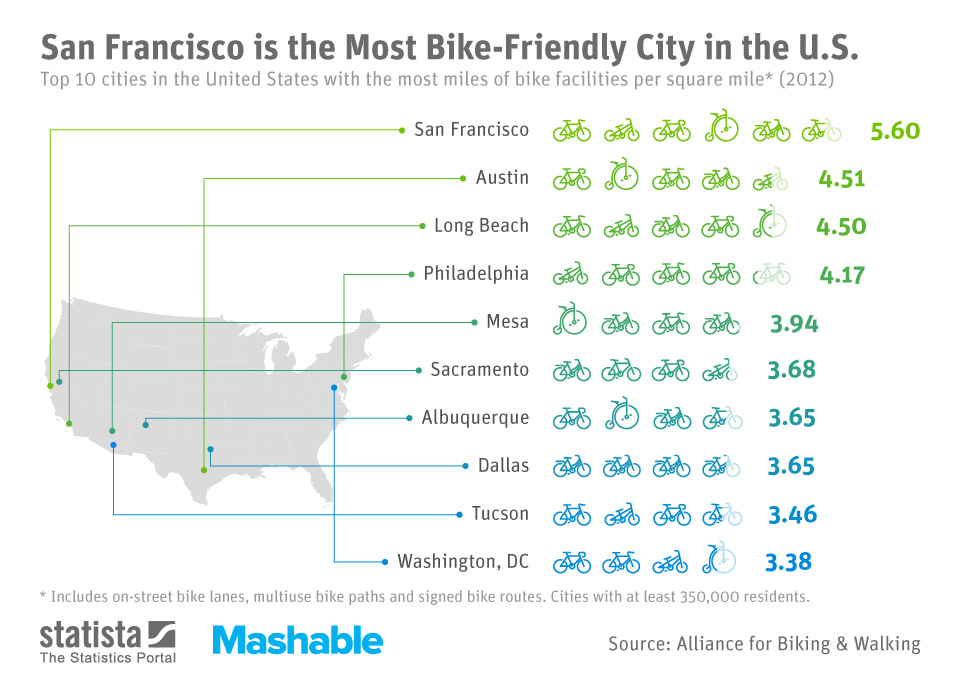 Not taken into consideration? The cycling accidents and fatalities that have plagued the City in recent months; although it remains unclear how the City's bike accidents per capita stack up against the other cities listed in the top ten, which include Austin, Long Beach, and Philadelphia (Portland, a longtime West Coast rival for urban bikeability, is noticeably absent from the list).

Which makes us wonder: Statistically speaking, San Francisco may be the most bike-friendly city in the nation, but what does it feel like? Ladies and gentleman, to better understand your deep-seated emotions about the issue, we present a rare SFist poll. Fire away, citizens.

A spate of surprisingly high winds, some as gusty as 65 mph or more, hit the East and North Bays overnight leading to a number of falling trees, power outages, and two fatal

Why San Francisco needs a bar like Emperor Norton's Boozeland. [7x7] An automated emergency alert system at SFO failed moments after the Asiana crash. [Chron] It's San Francisco's first Thanksgiving with a Target

—
S.F. 'Most Bike-Friendly City' In The Country?
Share this