A spate of surprisingly high winds, some as gusty as 65 mph or more, hit the East and North Bays overnight leading to a number of falling trees, power outages, and two fatal accidents in Oakland.

One man was killed either by a falling tree or after stepping on a downed power line (depending on whether you believe the Chron or ABC 7) at Austin Street and Fruitvale Avenue in Oakland just after 8 p.m.

Another man died a half hour later in a vehicle accident on Skyline Boulevard after he apparently tried to avoid fallen debris and ended up crashing his car.

The winds left 42,000 people without power in the East Bay at one point last night. That number is now down to 13,000 according to PG&E. Additionally, there are many downed tree branches and uprooted trees to clean up.

The high wind advisory was only just lifted, at 10 a.m. Much cleanup is now underway.

Update: ABC7's Heather Ishimaru shares this photo, via Twitter, of the roots of a huge eucalyptus tree that fell near Lake Merritt. 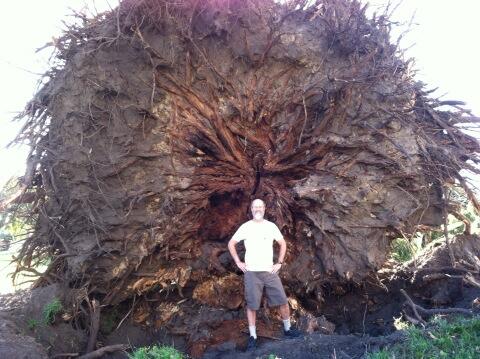 It's been a week since we all got to vicariously live out our own childhood superhero fantasies through Miles the Batkid and the Make-a-Wish Foundation. And now we bring you the trailer for

It's all relative, as the saying goes, and it's never been truer than with today's announcement that San Francisco has been crowned the "most bike-friendly city" in the nation. Or, as it could