The gritty BART plaza on the northeast corner of 16th and Mission could one day become a 10-story, mixed-used development with 351 condos and 32,000 square feet of ground floor retail space. The proposal by developers Maximus Real Estate Partners and designed by Skidmore Owings & Merrill would build directly on top of one of the city's most notorious transit hubs would potentially replace several existing storefronts.

While the development is still in the very early stages, the proposal would replace the Walgreens, Hwa Lei Market, City Club Bar, the Burger King and two other shops with a wall of glassy storefronts along Mission Street and around the BART plaza. According to the developer's proposal, those blank walls along the plaza are a contributing factor to the high rate of crime on the corner where just last week a 22-year-old man was shot and killed.

In addition to the storefronts, the building will stand 105 feet tall along Mission Street, with smaller 55-foot buildings on the back side along Capp Street. At street level, the proposed development will include 20,000 square feet of public open space as well as a 12,800 square-foot private courtyard. A little less than half of the building's condos would also include their own private outdoor space. A parking lot along Capp street will also disappear in favor of a 56,000 square-foot underground parking garage that takes up almost all of the project's footprint. 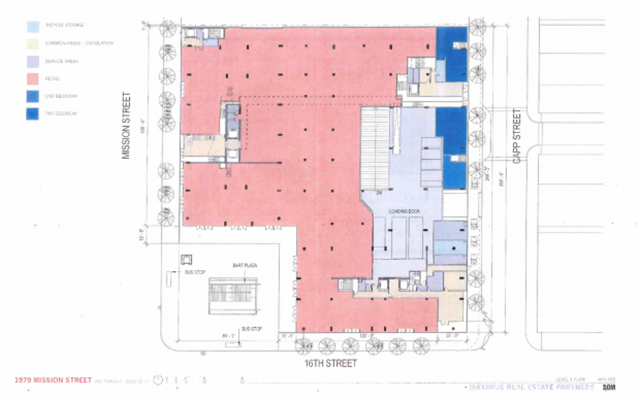 Although the project still has several rounds of approvals and revisions to go through before moving forward, a project of this scale is bound to make waves in the neighborhood. Because the development will only be building over retail space, no current residents will be displaced by the development, but as Mission Local points out, the intersection is home to the highest concentration of SRO hotels in the Mission and it is still unclear how the development plans to accommodate the city's affordable housing requirements. Per the Mayor's Office on Affordable Housing, the development could either set aside 12 percent of the space as below market rate units, build affordable units off-site somewhere or pay a 20 percent fee to the city. The developers could also donate a portion of the total land to the city to build affordable housing as it sees fit.

Tenderloin SRO proponent Randy Shaw believes there will be a lot of support from surrounding business owners. Developers and real estate types are also excited about the huge opportunity to build residential units around one of the few BART hubs in the city, but as one Misison native predicted to the San Francisco Business Times: "Every last person and every last coalition city wide" will be joining the fight against it.

Widely loved British painter and FOW (friend of Warhol) David Hockney, who splits his time between London, his native Yorkshire, and Los Angeles, took quickly to the medium of the iPad. In what

There's been a glut of burger joints around the Bay the last couple years. Whether we all collectively have just said "[email protected]%k it" to our Paleo diets and training programs and embraced