As reported earlier, the timeworn Fog City Diner closed earlier this year and just reopened last month as Fog City (1300 Battery at the Embarcadero). Taking over the kitchen is Bix and Picco chef Bruce Hill, who has done an excellent job of bringing some sophistication back to the place while also building a menu full of easy-to-like vegetable, seafood, and meat dishes, most of it roasted over a wood fire.

While you're likely to find plenty of things to like here, including a honking ribeye steak and a whole roast trout, the star of the show at a recent meal was the butterflied, wood-roasted chicken ($34), cooked and served in a cast-iron skillet. The bird is roasted over aromatics like cumin and coriander, and seasoned well with Maldon sea salt, lemon zest, chili, and black pepper. It's served with corn and crispy potatoes, and it is as juicy a chicken as you'll eat. The flavors that roast into the breast meat are complex but not overwhelming, and the thing is impressive to behold  it's also definitely an entree for two.

And while you're at it, make sure to order the basket of Japanese-inflected, hand-cut Furikake Fries. Furikake is the traditional condiment, usually put over rice (also popular with some on Chex mix), consisting of sesame, seaweed, and dried fish, and Hill douses his in a liberal amount of the above, with bonito flakes, as well as salt. They're addictive, and Hill says they're already the "runaway hit of the menu." 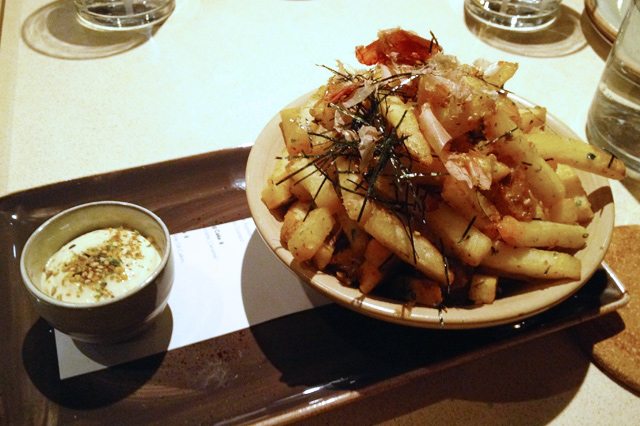 It's come to this, everyone. Remember Rebecca Black? Remember that Nicole Westbrook chick and that horrible song "It's Thanksgiving"? Well, now it's time for Patrice Wilson, "songwriter" and starmaker of wealthy tween girls