After months of largely ignored racing on the bay, the America's Cup comes down to one final race. The stakes are high: on the line are one bajillionaire's inflated ego and the honor of an entire island nation made up of insanely friendly people. The two teams are racing their absurdly expensive pterodactyl yachts in pursuit of the oldest trophy in international sports. It is impossible to imagine there could ever be a greater sporting event in modern times. (Except for maybe the puppy bowl.) The final race is scheduled to begin at 1:15 p.m. PST.

After neglecting the America's Cup Village for the better part of a year, we are currently coming to you live from the America's Cup media outpost on Pier 27, where the password for the free Internet is "news*2go!" and you needn't be on a boat to see the action. (Because there is air conditioning and TV screens and very little natural light) There is, however, an endless supply of sponsored Red Bull. Outside, a flood of eager fans waited for the gates to open around 10 a.m. this morning. Parked just outside is a yacht with another yacht on it:

At a 10:30 a.m. press conference, in what will one day serve as San Francisco's cruise ship terminal, Australian Regatta Director Iain Murray reminded a handful of reporters that there would only be one race today, assuming the breeze didn't exceed the 24.4 knot wind speed limit. "I know we're all anxious — desperate — for this thing to conclude today," Murray said, "but I will not put these boats at risk." When asked whether he would like to be Regatta Director in the next Cup, Murray politely dodged the question: "I felt privileged to have held this far. I think we need a little time to let the dust settle, but lets see where we go." 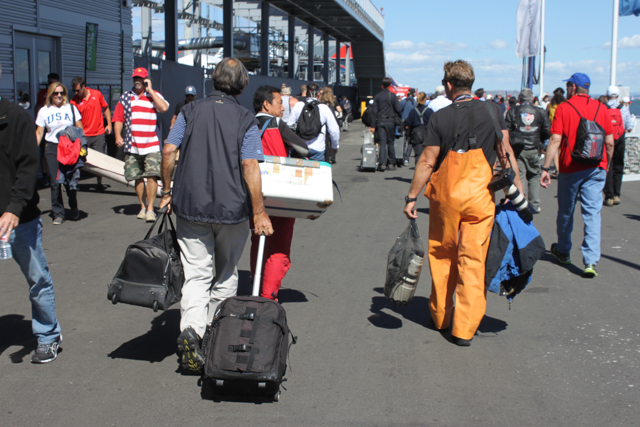 Update, 1:10 p.m.: Your SFist correspondent isn't one of the lucky photographers going out on the chase boats, but they're all dressed like the guys from Deadliest Catch anyway, so joke's on them, really. Instead of suiting up for photos on the water, I went to check out the scene around the village. Loudspeakers are blasting the new Arcade Fire track, followed "Don't Stop Believin'". A race announcer on a podium decided that this race is "on like Donkey Kong!" — which is a stupid thing that no one who gets paid to say things out loud should ever say. We've spotted more than one adult person riding a razor scooter. 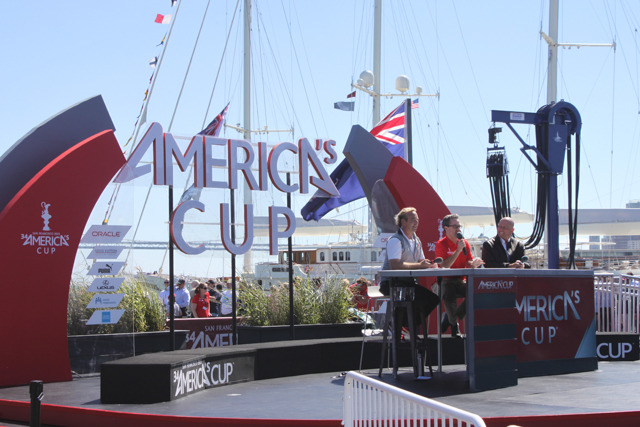 "It's on like Donkey Kong!" - That guy on the left. (Photo: Andrew Dalton/SFist)

In search of an adult beverage, we managed to sweet talk our way into Oracle's viewing lounge with the help of a very friendly woman who reminded us of Mrs. Coach Taylor ("I'm with the media.") We are currently bringing you updates from Larry's private lounge, where we are drinking Larry's Miller High Life. (Full disclosure: I'm rooting for New Zealand.)

The boats are in the start box, this race is about to get underway.

Update: 2:15 p.m. After taking a lead through mark 2, the Kiwis quickly fell behind on the way to mark 3. With the lead change, the folks in Oracle's private lounge started popping bottles of champagne. Because why not. In the parking lot that served as the public viewing area, someone was burning sage. Back inside, Oracle's guests instagrammed TV screens, because even in Oracle world, you still don't have much of a view of the racing. 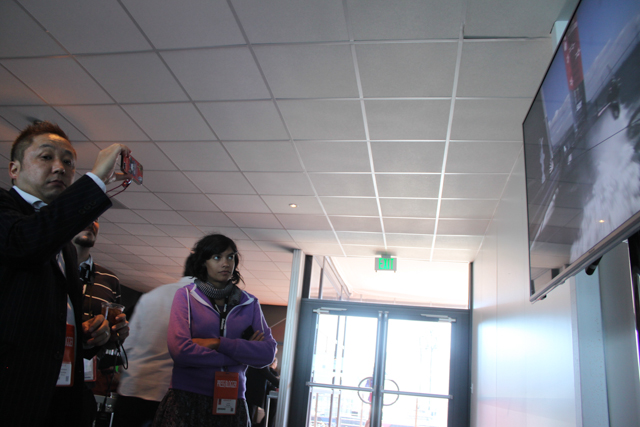 Just before Oracle crossed the finish line, someone in the lounge fell off the stool they were standing on, spilling their drink on the temporary carpet in the process. Everyone else lined up for a good spot to snap cellphone photos. One white haired guy with a "REPORTER/BLOGGER" lanyard around his neck took photos of the TV screen with a telephoto lens. This guy wore an incredibly patriotic t-shirt that we can only image he reserves for the 4th of July and billionaire yacht races: 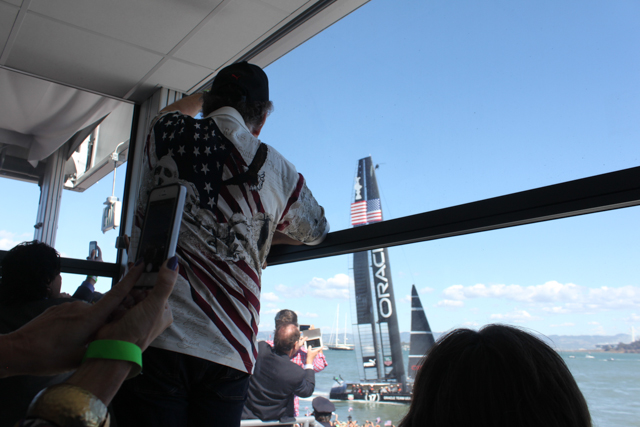 Ellison himself hopped onto the Oracle AC72 yacht along with his hired gladiators. It'll be another 30 minutes or so before they all return to the stage to spray each other with champagne. In the meantime, here are some dogs on the frontlines: 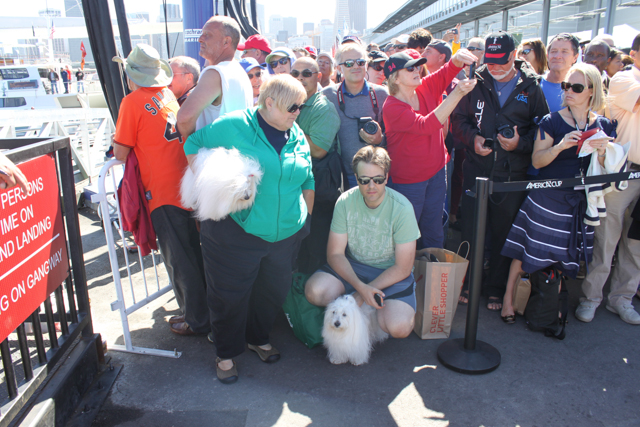 After a brief hiatus and a gracious introduction of the Kiwi team, former Mayor Gavin Newsom and Mayor Ed Lee, the architects of some contentious deals that brought the Cup to San Francisco in the first place, celebrated Oracle's big win. Newsom wore an Oracle ballcap instead of his trademark L'Oréal hair gel. Mayor Lee exclaimed, in his tinny Kermit the Frog voice, "the 34th America's Cup is over and WE WON!" Oracle Team USA strut out onto the stage to the tune of AC/DC's "Back in Black." 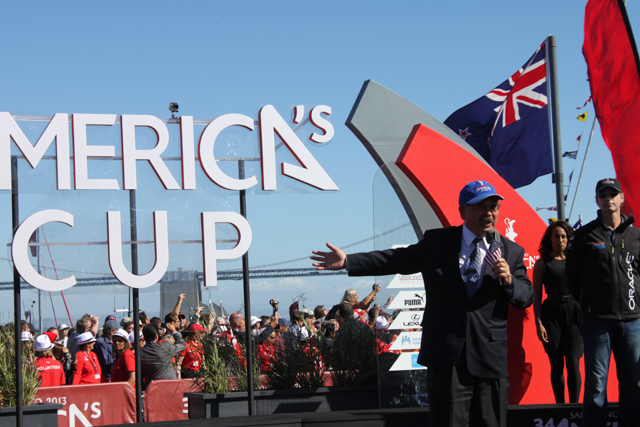 With the entire team onstage, champagne was popped, champagne was poured into the Cup itself, and champagne ended up all awkwardly soaking the Mayor's suit. Ed Lee would return to the office slightly stickier than before. 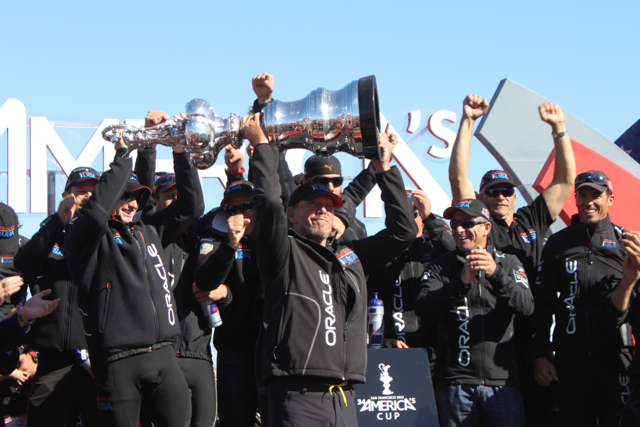 A disgruntled anti-Googler has put up this large-scale poster, poetically decrying the search engine's inexorable reach into our lives. It reads: I'm watching you/ I'm targeting you. I'm searching for you. I'm tracking

Remember June? And July? And then August? Yeah, it's happening again. Because 2013 is Groundhog Day when it comes to BART and its unions. The 60-day cooling-off period ends on October 10th, and

—
We're Live From The America's Cup, The Greatest Contest In The History Of Sports [Updates]
Share this