Never before has buying food from a motorized vehicle been so popular. But here we are. Amid controversy and long lines, the food truck revolution has taken hold in S.F. Understandably so. Many of them serve a variety of excellent fare. Here are our favorites.

THE CHAIRMAN TRUCK
There are few trucks that are followed with the dedication and intensity of the Chairman Truck, which makes appearances at most of the city's Off The Grid events. Get the tender pork belly with pickled daikon and green shisho if you know what's good for you (actually, if you're concerned what's good, for you get the miso cured tofu with baby choy sum). The steamed buns are the name of the game (order at least three), but the hefty baked ones also sometimes hit the spot. 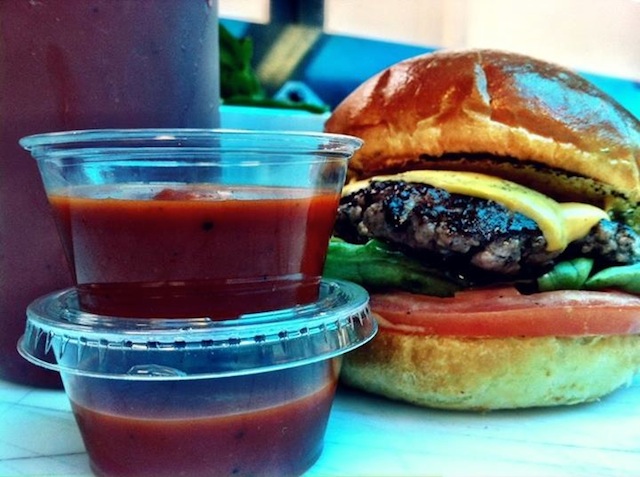 DOC'S OF THE BAY
Endlessly touring San Francisco and the East Bay, Doc's roaming burger shack makes one of our favorite fast food-style burgers from a truck... or otherwise. The classic is a 5 oz. patty topped with melted American cheese on a griddled challah bread bun from Firebrand and adorned with fresh local veggies. On the poultry tip: Doc's makes a fried chicken sandwich lightly battered in buttermilk and topped with jalapeno-dill slaw that gives us another reason to be embarrassed that we ever craved Chick-Fil-A. For a less heart-stopping pick, the truck also churns out homemade black bean & corn burgers topped with Monterey jack and a crisp red cabbage and jicama slaw. Pair it all with a 50/50 order of seasoned potlatch fries and green beans plus a side of homemade red bell pepper ketchup. 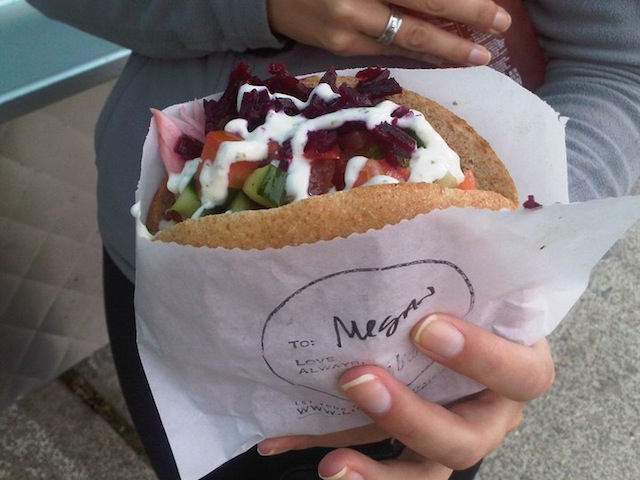 LIBA FALAFEL
As if having the best damn falafel balls in town wasn't enough, Liba allows diners to pack their pita with any number of Mediterranean-via-Bay Area toppings from the seasonal falafel bar. Think: hummus, fennel and strawberry slaw, fried pickled onions, dill & cardamom pickles and the not-to-be-missed rosemary seasoned peanuts. Add on a side of thin crispy shoestring sweet potato fries for the full effect. 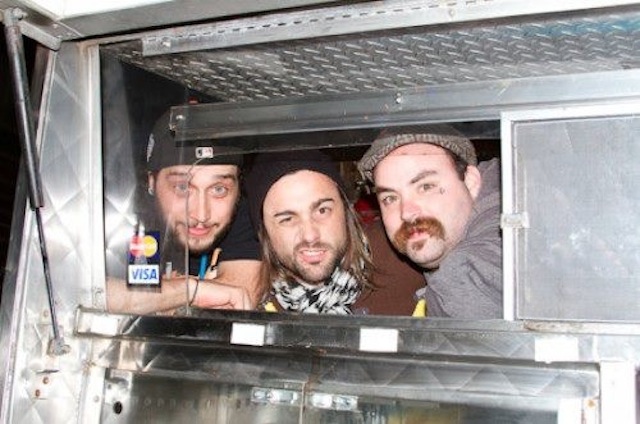 COSMIC AMERICAN VOODOO VAN
There is some real sinister stuff going on in the Voodoo Van's kitchen: green beans battered and fried like funnel cake, fried potato Juju balls unkempt with pickled onions, loaded shrimp po'boys and a massive Skirtlifter steak sandwich (available in the vegan seitan "Tranny Chaser" version). The real coup-de-grace is the Kong: a heaving dessert sandwich made with marshmallow fluff, peanut butter, and salted bananas all rolled in cocoa krispies and deep fried, because why the hell not? 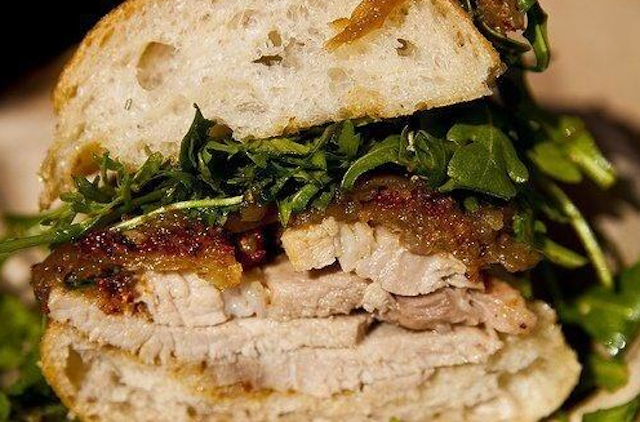 ROLIROTI
Serving sustainably-farmed meats and organic produce, RoliRoti is best known for their chicken. But that's not all. They also boast organic rosemary fingerling potatoes, Sonoma Valley lamb, and crispy porchetta all of which have earned them the moniker of "Grandfather of Gourmet Street Food." 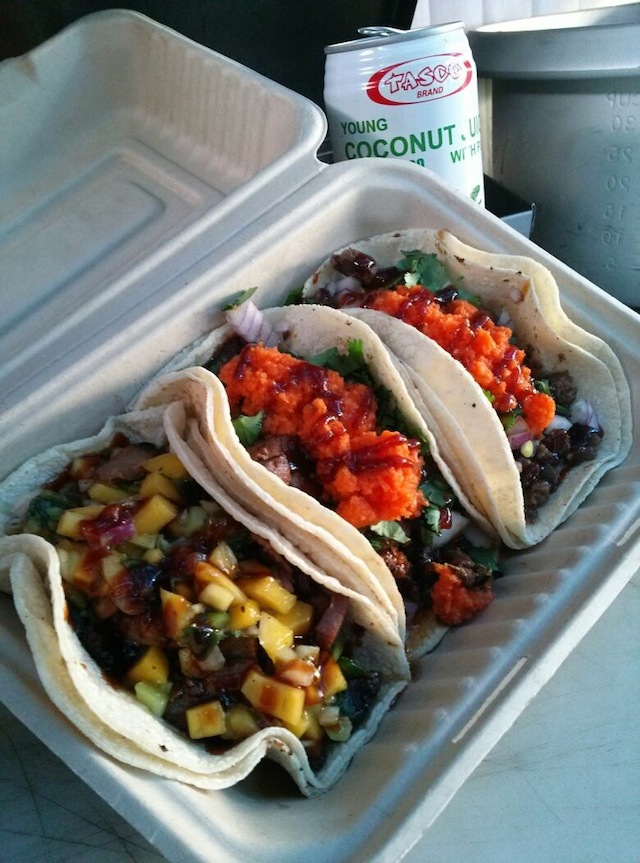 KUNG FU TACOS
Kung Fu Tacos is a force to be reckoned with in the FiDi truck scene and elsewhere, with constant lines for their style of Korean-fusion tacos. Our favorite dish has to be the duck tacos, but they also do a mean Asian asada burrito. 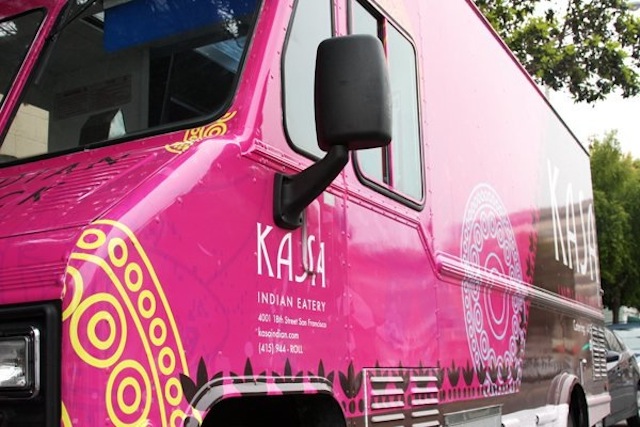 KASA INDIAN
If you can't get to the Castro or to their new location on Polk Street, you can always find the Kasa Indian truck serving up some solid tikka masala and saag paneer in SoMa, Mission Bay, and at Off the Grid Vallejo & Front on Fridays, among other spots. It's pretty tasty stuff, especially from a truck, and their kati rolls (kind of like mini burritos) are a cheap and welcome alternative to your standard downtown lunch fare. 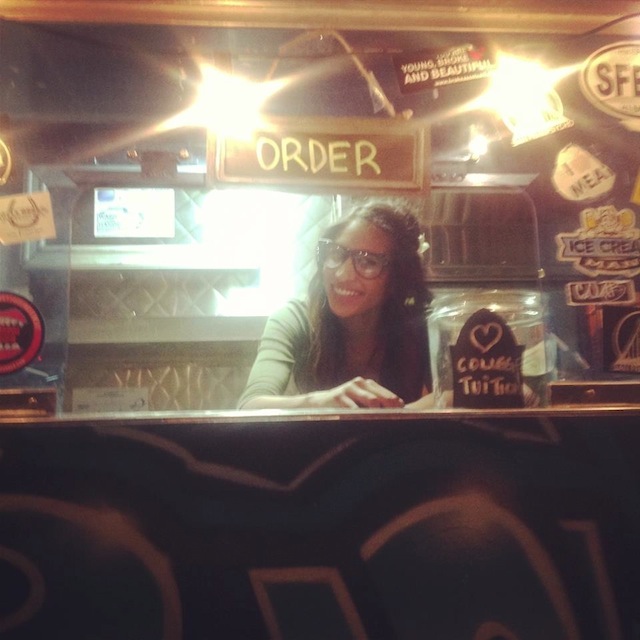 BRASS KNUCKLES
In the realm of sandwich trucks, this one is high on our list. It also helps that they don't take themselves too seriously. Founder Shellie Kitchen has created a series of cheeky spins on tradition, like a bacon-burrata BLT called the BB King, a rockin' burger with Colby cheese called the Meatallica, and a version of the fried chicken sandwich with spicy slaw first popularized by Oakland's Bakesale Betty, here known as Fryin' Maiden. And don't miss the Occupy SF Fries, which come topped with carnitas, crema, pico de gallo, and cheese for a Mex-style take on poutine. 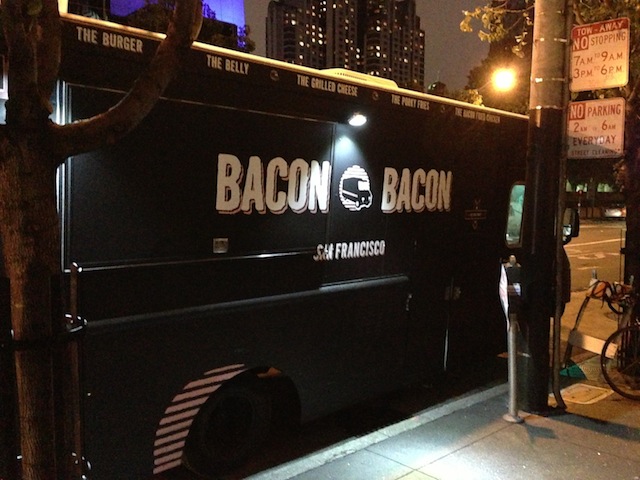 BACON BACON
Whether or not heaps of cured porcine is your thing, yo have to be impressed by Bacon Bacon's national attention. The bacon purveyors had to temporarily close their Cole Valley brick-and-mortar shop after two (two!) neighbors complained about the persistent bacon aroma. Every outlet from Saturday Night Live to the Wall Street Journal had a turn at the story. But media aside, the truck serves up fine fare like the Beta Bacon Breaded Chicken Breast, "the Bacon Bouquet," and chocolate-covered Bacon. 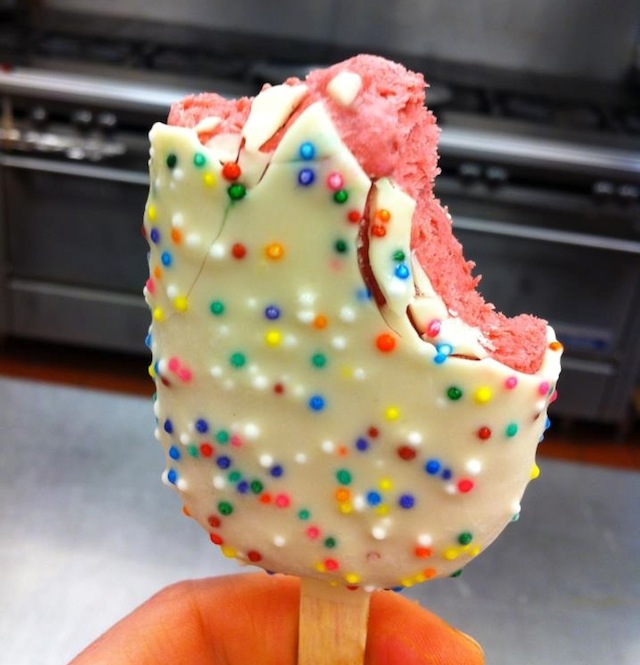 GARDEN CREAMERY
This cheery ice creamery on wheels boasts the best cream pops we've ever tasted, from the "Coconut Mound" (coconut mousse dipped in dark chocolate) and the "Rainbow Raspberry" (raspberry mouse dipped in white chocolate & rainbow sprinkles). But the knock-your-socks-off has got to be the Strawberry Pretzel, with creamy strawberry mousse dipped in white chocolate & topped with salty pretzels. Also look out for their sorbet pints and ice cream cookie sandwiches (they've got one that's ice cream mousse between two rice crispy treats).

* The best place in the city to find food trucks, many of them listed here, is at SoMaStrEat Food in SoMa.

Burger time at Doc's of the Bay.

Fans of whimsical swimwear, awkward tan lines and Shark Week can mash up all of the above with this "Sharkini" swimsuit inspired by the ocean's greatest predator and created by local fashionista Bad