The search is on for several suspects wanted for vandalizing city streets and local businesses during last weekend's Justice for Trayvon rallies. Police have asked the public to help identify suspects and have released photos of one suspect/street artist tagging a the street with Trayvon's name, a suspect throwing a garbage can into window and a third denting the side panel of someone's Honda Civic.

The suspects are still at-large, although it's not like they got away with murder here, and OPD would like anyone who might be able to ID them to call their tip line at 855-847-7247 or text "OAKLANDPD" to 888777 with your tip. 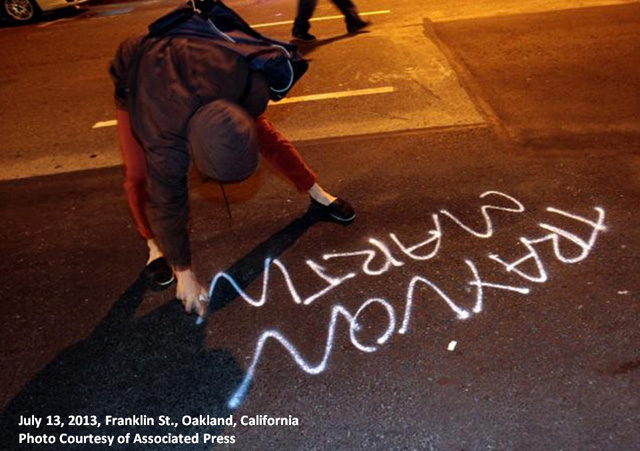 Also, investigators are looking for any other documented instances of vandalism or assault that may have happened during recent demonstrations. Video footage, photos or other information should go to Sgt. Clifford Wong at 510-238-3951 or by email at [email protected].

The wild parrots of San Francisco aren't confined just to Telegraph Hill anymore, as featured in that 2003 documentary. There's a flock of them down in Brisbane now, and one around Alamo Square,

In the SFMTA's continued efforts to please no one with their Polk Street Corridor Improvement Project, a new plan (PDF) was unveiled yesterday that would backpedal on separated bike lanes but still remove