If the Tamale Lady has taught us anything, it's that taking advantage of drunk people's appetites is a viable business model for aspiring cooks. So, for my third journey into WWBBM?, latching on to the Pride bandwagon seemed like no-brainer. After all, people leaving the Pride festivities would have an appreciation for both opportunistic sidewalk sausages and figure skating.

For this to work, I'd need a support crew. So I brought sous chef (and owner of portable camp stove) Wes "Mesquite" Rowe, along with chief event consultant Lauryn. Between the three of us, as well as a batch of Brian's white wine sangria, I figured this would be a breeze: 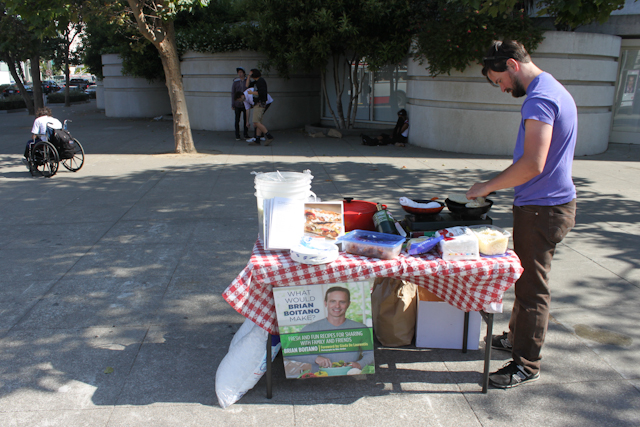 Before setting up shop at Van Ness and Grove, near the Pride melee, we had to do some legwork. The recipe calls for quick-pickled peppers with sweet onions, pre-grilled hot Italian sausages and two types of cheese all toasted on a ciabatta roll. Here, Brian does it all for the folks on Food Network in under three minutes:

Things proved a touch more difficult for three hungover amateur cooks on Pride Sunday, however. Especially when our quadrupled recipe meant slicing a metric ton of peppers and onions (read: five each of red and green peppers, plus five onions). Dividing up the work, Wes took on slicing duties, while I grilled the tubesteaks and boiled the pickle brine. Lauryn went to work on the Sangria, which we hoped would be a cool and fruity beverage to counter all those acidic veggies and salty pig parts.

White Wine Sangria: The Boitano method involves 1 bottle of Spanish white wine, apple juice, a granny smith apple, some mint, lemons, limes and sliced grapes. Brian recommends a light, dry wine like a Verdejo or an Albarino — a recommendation we promptly threw out in favor of a 5-liter box of Franzia's finest "Crisp White" varietal, which we combined with sugar, sprigs of spanked mint, sliced apples and citrus in a bucket that Wes had laying around marked "ALLERGEN ALERT: PEANUTS." Anyway, we were pretty sure the bucket was clean and peanut-free now. 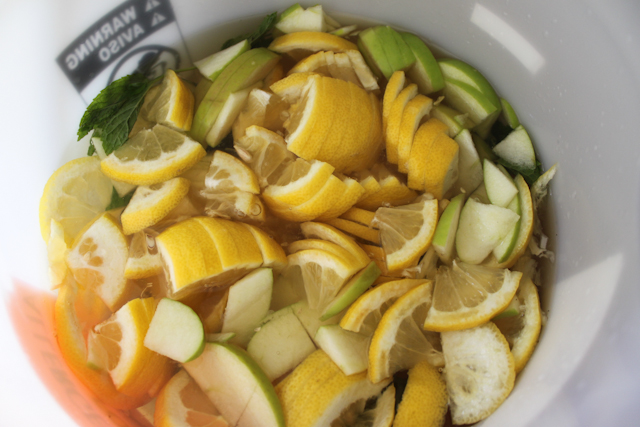 Topped off with ice and a splash of soda water and the whole thing was surprisingly refreshing. The beauty of Sangria is that you can't really screw it up. Just keep adding whatever you feel like until it's as sweet or as dry or as citrusy as you'd like. By the end of the afternoon, ours just tasted like slightly boozy apple juice.

With the Sangria sloshing, the peppers pickled and packed, and about half our sausages butterflied and grilled to gold medal (or at least Food Network) standards, we packed the car and headed for Civic Center. But first we had to pick up 2-foot-wide facsimile of the book cover that we had printed up at Staples. If we were going to piggyback off the fame of a 1988 Olympic Gold Medalist, we had to make sure people got the whole visual: 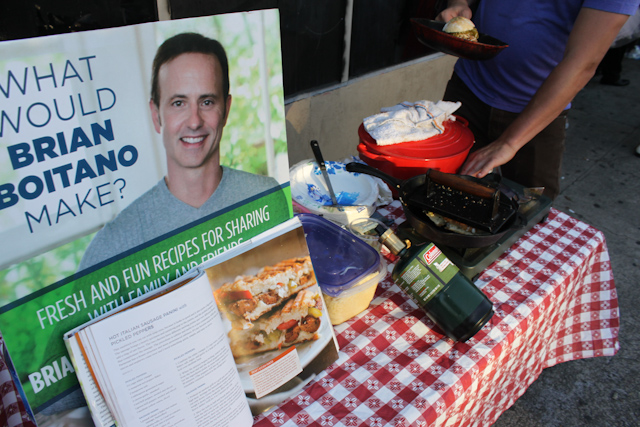 We thought the colorfully dressed rollerskater circling us on the plaza in front of the S.F. Symphony would work to our advantage, but as it turns out, our first almost-customers were a trio of girls in their late teens wearing daisy dukes and bikini tops who had descend on Civic Center from a far-flung BART station. While one admitted to being a figure skater, none of them had a clue who Brian Boitano was. Fair enough. I figure they were still in kindergarten when South Park: Bigger, Longer, Uncut came out in 1999. But did they buy my $6 panini? No, they merely wanted to know whether they would have to walk through the Tenderloin to get to Dolores Park from here and then went on their merry way.

A pair of men of a certain age would become our first official customers of the day. While waiting for their first sandwich to come off the grill (a frying pan on a propane stove), they argued sweetly over whether they each needed a sandwich or if they could just split one. They ended up buying two: 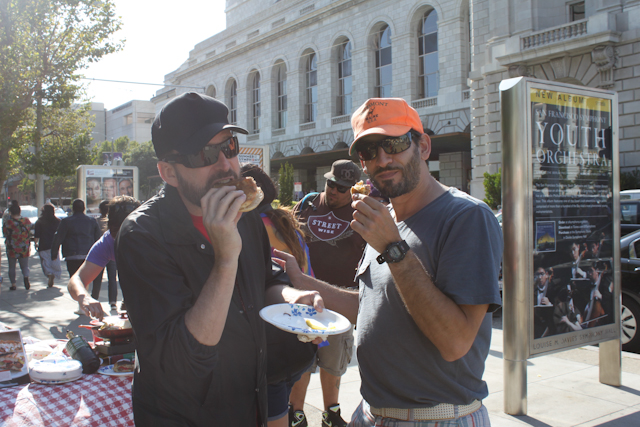 A portly t-shirt salesman from Modesto, who drove all the way into the big city to sell homemade Pride-themed tees on Van Ness, bought another sandwich (albeit sans pickled peppers) before returning shortly after to significantly boost our bottom line by buying three more. He was our best customer of the day.

Having now officially sold food illegally on the sidewalk, our crew was no longer intimidated by the guy selling bacon-wrapped hotdogs 10 yards away. We even perfected our carnie catcalls ("HOT Italian Sausage!" "Boi-TAHN-OH Panini!" "White winnnnnne sangria!"), but the fog and the dwindling crowds meant it was time to bail. We plotted our next move to the holy grail of fabulous Sunday day drinking: Hard French.

[Disclaimer: This panini pop-up project is in no way related to Hard French, we're just opportunists.] 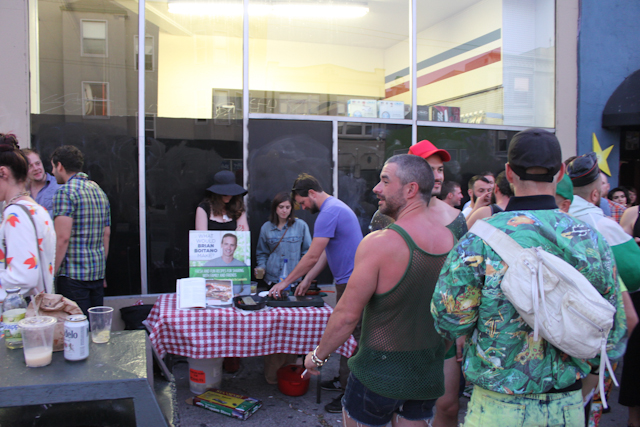 Setting up again in front of a tire store on Mission Street, we made relatively quick work of our remaining panini. Three sold to the bar staff next door at Virgil's, and the vast majority flew out of our pan once we started cooking sausages again and the cigarette smokers waiting around to get into Roccapulco drifted over, following the scent of grilled meat. Our Boitano-theme pop-up was met with both delight and confusion. One woman, who appeared totally sober, was incredulous that we were not in some way being paid off by the cookbook's publisher*. Tips started getting stuffed in your author's waistband, we were getting a little buzzed on Sangria and naked butts started getting dangerously close to our frying pan:

By the end of the day, we sold through our stock of panini (although our staff indulged in a few ourselves), gave away about half our bucket of Sangria and made some youngsters aware of a late eighties cultural hero while making back all the money we spent on groceries in the process. As we packed up the car and decided to go spend all our earnings on cheap beer and whiskey next door, we fed one last hungry customer: an apparently homeless kid who claimed our last, gratis double-meat sandwich. Giving back just seemed like something Brian Boitano would do.

Next time: A cocktail we renamed The Boitano 88 and thoughts on celebrity.

*Full disclosure: SFist received a review copy of the book for free, but only after pitching this foolhardy project to the folks at Lyons Press. All other expenses are paid for by the author, who is not very liquid, by the way.

Everyone should be able to relate to this little ditty, sung by puppets, about the frustration of friends asking you repeatedly to donate to their Kickstarter projects. This comes to us from one

Around 2:20 p.m. Friday afternoon, San Francisco Police and Fire Department units responded to reports of a shooting on Brannan Street between Seventh and Eighth Streets in SoMa. The units responded