When it comes to ice cream in this city, some flavors are frozen royalty: Bi-rite Salted Caramel, for instance, or Mitchell's Mexican Chocolate. But after getting it into my head to make ice cream at home, I made a beeline for the Humphry Slocombe cookbook, and specifically for their first recipe: the singular Secret Breakfast. Soft as a baby's ass, but with an adults-only slug of bourbon and delicious cornflake crunch, Secret Breakfast is the original and most popular of Humphry Slocombe's many flavors.

Mercifully, the ingredients and directions for this recipe were decidedly less imposing than my last project, so I blithely forged ahead. It was easy to gather the basic ingredients (you'll probably have everything in house except for the cream and maybe the corn flakes, although I'm sure you've got Kashi aplenty you can sub in a pinch). First speedbump? You have to refer to a whole different recipe at the back of the book to bake the "Corn Flake Cookies" which will be mixed into the ice cream at the end. Luckily, I'd had a rough week and was more than happy to spend an afternoon indoors manipulating cookie dough to suit my whims. Two episodes of Top Gear later, I had my corn flake-packed cookies and was ready for the main event.

My main impression during the ice cream-making process was how utterly un-photogenic it was (I've spared you the many images of off-white liquid sloshing around in a succession of different pots and bowls). Basically, you heat milk, cream and salt in a pan until your pores being to open, then blend in a mixture of egg yolks and sugar. Stir constantly until it begins to give off steam, then transfer the (sloshing, off-white) liquid into the ice bath you've prepared, until cooled. Per the instructions, I added the half cup of bourbon and stuck the custardy mixture in the fridge for the bare minimum one hour. Visually, it remained pretty unimpressive, and quick taste test revealed that it was bourbon-y, salty, and dairy-y, but not necessarily in a good way (yet). 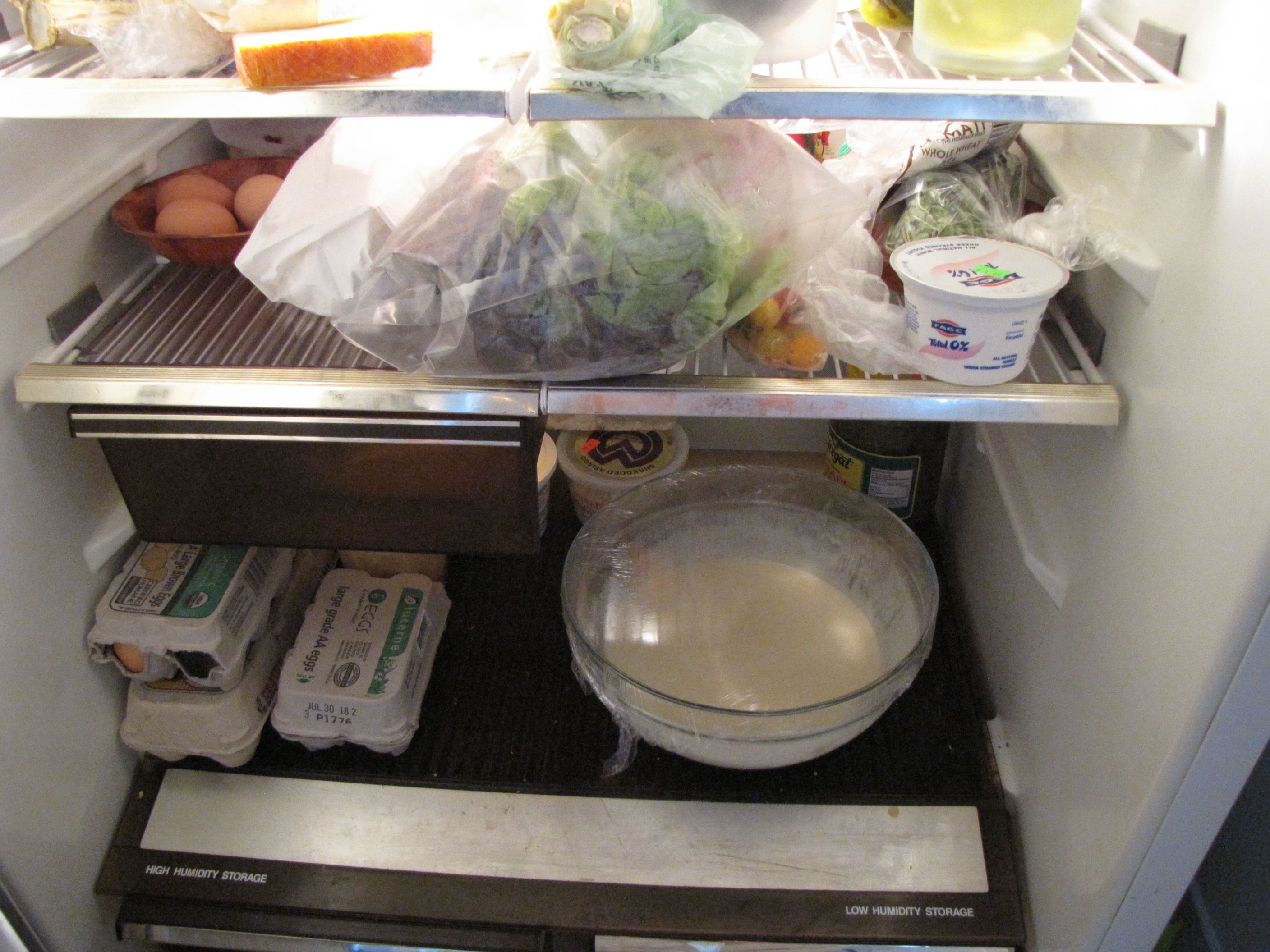 It's recommended that you have an ice cream maker for these recipes, but some of us have neither the space nor the money for such silliness (ditto the mesh strainer, which we skipped straight over). Thus, I referred to the cookbook's How to Make Ice Cream Without a Machine page, which dubs this method "going ghetto-style". The basic gist is to put your ice cream-to-be into a chilled baking dish and pop it into the freezer for an hour, then take it out every 15 minutes or so to vigorously stir it around until it approximates the texture of ice cream. This particular recipe, however, was billed as one of HS's softest ice creams due to its alcohol content, and obsessive checking of my "ice cream" was met with disappointment: either my freezer wasn't cold enough, or the damn thing was having some serious trouble achieving hardness. (Remember: performance issues are not your fault!) After a couple hours came and went with no real signs of progress (it remained off-white and sloshing), I decided that I should leave it overnight.

Fittingly, it was breakfast the next morning when I pulled my ice cream out of the freezer, served up a bowl and topped it with chopped up cookie chunks and crumbs. Bourbon for breakfast? No one had to know. Flavorwise, my ice cream erred on the salty side, and the sharply alcoholic aftertaste was an eye-watering morning wake-up. But the cold had, miraculously, tempered its flavors into something recognizable as Secret Breakfast. I was triumphant! And maybe a little drunk.

[Update] A helpful reader points us to this recipe correction, which reads "We may have been hitting the sauce a little too hard when we called for 1/2 cup of bourbon ... please use 1/4 cup bourbon instead". Mystery solved! This explains the perma-meltiness of the ice cream and its unusually strong wallop.

Sure, my ice cream had the texture of soft-serve at high noon, staying frozen only for the briefest moment. But that was all the time I needed. 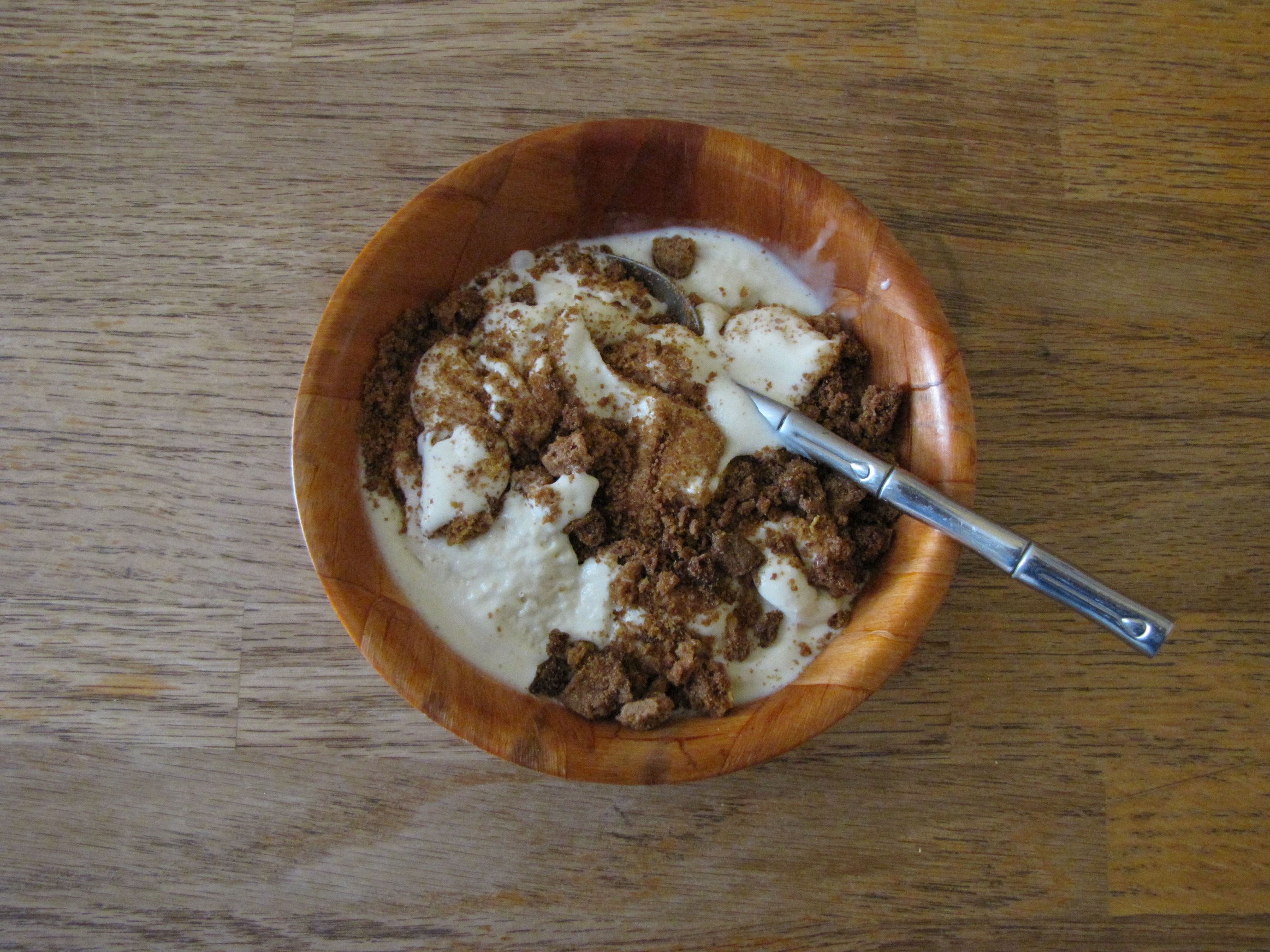 Special thanks to Andrew Dudley for gifting me the Jefferson's bourbon used in this recipe.

Previously: We Tried To Make SFMOMA's Mondrian Cake, And This Is What Happened

The upcoming Graton Resort & Casino, due to open this fall in Rohnert Park, has just announced an impressive lineup of food vendors which are sure to set it apart from other casino-resorts

Somewhere men are laughing, and somewhere children shout, but there is no joy at Spreckels Lake in Golden Gate Park, which is under renovation and looks like a tired metaphor for the fleetingness

—
We Tried to Make Humphry Slocombe's Secret Breakfast Ice Cream, And This Is What Happened
Share this