"I really like entertaining," writes 1988 Olympic men's figure skating gold medalist Brian Boitano in the introduction to his new cookbook, What Would Brian Boitano Make? "Maybe that's why I was attracted to both my passions, cooking and skating." Personally, I'm a less than graceful on the ice and mediocre at best in the kitchen. But that won't stop me from going full Julie & Julia on Boitano and his new book.

My talents lie in observational humor and cute animal photos. However, as Brian writes continues in the introduction, "there's a certain type of thrill and deep satisfaction in developing new skills and constantly improving." Which is why I'm cooking my way through all 83 recipes in his delightfully self-aware cookbook based on Brian Boitano's Food Network show of the same name. In the immortal words of that South Park musical number: you've got to make a plan and follow though. (That's what Brian Boitano'd do.)

We begin this week with something any jerk could make with a pot and a frying pan: Spaghetti Carbonara.

What really sets Brian's cookbook (which we'll now be referring to as "WWBBM?") apart from other celebrity cookbooks is that this one is written by Brian Boitano. Each section of the book (Starters, Beverages, Pasta, Meat, etc) is introduced the way you might introduce yourself at a cocktail party: with a winning smile and a personal anecdote. As a multi-talented, showy and well-traveled person with a multiple "...on Ice" movies to his credit, Brian is basically the ideal cocktail party guest. (He has an Emmy for figure skating in Carmen On Ice, for chrissakes.) All his stories begin with something like, "There I was, cooking dinner for a charity auction at Dick Button's house..." or "So, I was skating on a temporary rink set up inside St. Peter's Basilica..." 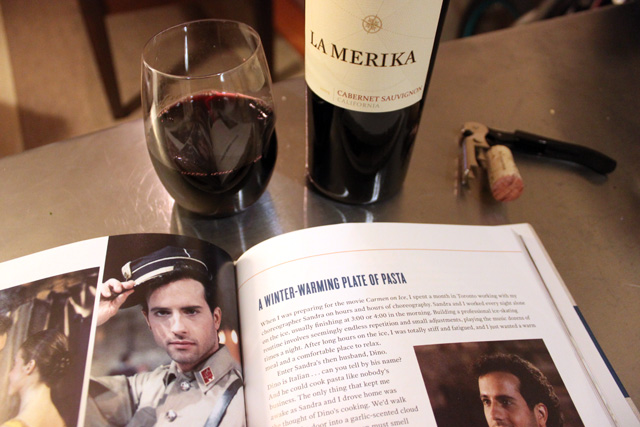 In the case of "A Winter-Warming Plate of Pasta," Brian's story is a sweet yet hilarious piece about the time, while preparing to film Carmen, he discovered the life-affirming qualities of a nice, warm bowl of carbs. He also discovered his choreographer's husband:

After long hours on the ice, I was totally stiff and fatigued, and I just wanted a warm meal and a comfortable place to relax. Enter Sandra's then husband, Dino. [...]

The only thing that kept me awake as Sandra and I drove home was the thought of Dino's cooking."

On a cold and foggy San Francisco evening, Spaghetti Carbonara seemed like a simple enough recipe: half a pound of pasta, eggs, loads of parmesan cheese, a quarter pound of pancetta and some parsley. This recipe could be considered the upscale version of buttered noodles, which has long been a part of my home cooking repertoire. Unfortunately, Brian did not recommend a wine pairing, so I went with my gut and bought the cheapest bottle of red they had at the Falleti Foods on Broderick Street — a nine dollar California cabernet. Real gold-medal stuff.

Before getting started, I consulted Brian's advice on setting up your kitchen, which includes notes like "have lots of knives" and "stock your pantry with canned tomatoes." I'm not exactly a world-class figure skater doing the Stars on Ice tour; I'm just a guy who writes some things on the Internet for a living. So, my kitchen setup mostly included cleaning up after my roommate: 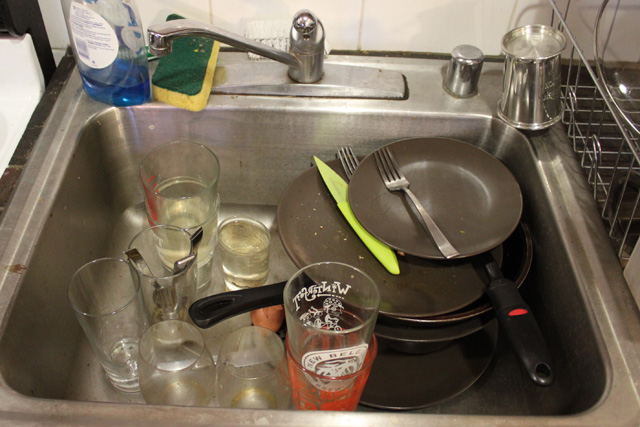 First step was to boil a large pot of "well-salted water." I don't know how to tell a pot of water is "well-salted" so I just put about three handfuls of Morton's iodized in there, which seemed to do the trick. Alas, my pot size was somewhat inadequate and the uncooked pasta was left sticking out the side. If my grandmother taught me anything about cooking it is to never break your spaghetti. Leaving it unbroken allows for long, luxurious twirls of the fork... not unlike the opening moments of Carmen on Ice:

While the pasta boils, the pancetta gets browned in a skillet. Let the record show that I am generally pro-pancetta, but unlike bacon, which always smells delicious, cooking pancetta smells like climbing into a sauna with bacon's fat, sweaty Italian cousin. It is sort of repulsive, but intriguing and foreign and makes you wonder if maybe Americans have just been doing bacon wrong all along. When cooked, the pork is removed from the heat and transfered to a plate lined with a paper towel. (I think people who dab the grease off their pizza have some deep-seated issues to work out, but in this case I will make an exception because of pancetta perspiration.)

With Brian as my copilot, the garlic gets roasted and tossed with the pasta in the skillet. The crucial step is to add the eggs, which have been whisked with Parmesan cheese, plus a half a cup of the starchy pasta water to the pasta and cook everything slowly so the eggs don't get scrambled. You really have to nail this big moment, or the whole routine falls apart. It's all about timing here.

As if attempting to land a quadruple toe loop, I got a little too ambitious and came up about a quarter turn short. I overcompensated on the recovery by adding more pasta water until I ended up with something that looked more like making an omelet in the middle of a pasta pileup. Instead of the creamy and light mixture picture, I ended up with a bowl of slightly greasy pasta with chunks of omelet and pancetta in it. It tasted delicious, sure, but won't win any points for showmanship. Slightly discouraged, I'm begin to think that Brian makes this look too easy. But I'm also drunk on cheap cabernet at this point. 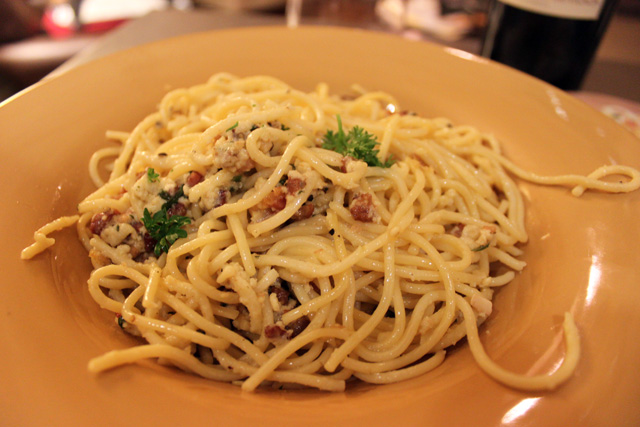 Next time: a three-course meal for ten, with bruschetta, shrimp polenta and panna cotta. Plus cocktail pairings. There will be hangovers.

Mia Gonzalez, owner of Encantada Gallery in the Mission, received an eviction notice from the darling little store she's run for more than 16 years. She responded by designing this powerful shirt. Friend

Behold the Apple I, built in 1976 by college dropouts Steve Jobs and Steve Wozniak. The highly coveted computer is being put up for auction by Ted Perry, a retired school psychologist who

—
Boitano Meets World: One Man's Quest To Cook His Way Through Brian Boitano's Cookbook
Share this