After video emerged yesterday of a man terrorizing 16th Street BART Station with his naked and bizarre antics last month -- who also sexually assaulted a woman in the process -- questions still remain. Namely, "where are all the cops?" and "was he high?"

The Chronicle followed up yesterday on the man's arrest: his name is Yeiner Perez and he is, as evidenced in the footage, a dedicated acrobat. While we can't speculate specifically on Perez's mental state, after the incident sources report that the suspect was taken away without causing much disruption to train service. (Although, as the video proves, plenty of disruption to bystanders' personal space and well-being.) 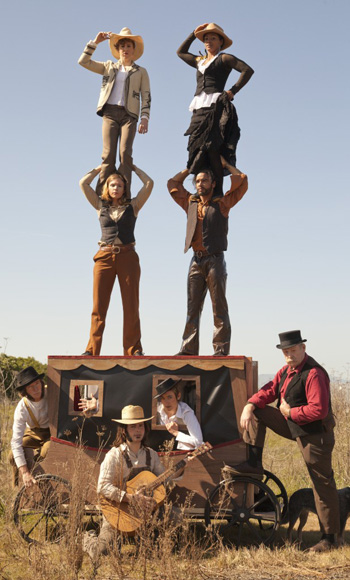 Perez performed with a troupe from Berkeley called ClownSnotBombs from the beginning of this year until around the time he was spotted doing his impromptu nude routine in 16th Street station on May 10th. According to the troupe's co-founding clown who goes by the name of Slim Chance, Perez was a "workaholic acrobat," but began missing practices days prior to the incident. Although Chance says Perez seemed to be under a lot of stress, the episode was out of character for him.

“I don’t think it was anything with drugs,” Chance told The Chronicle. “I don’t know. We’re thinking he may have even had a stroke sometime last year. We’ve been trying to piece it together ourselves.”

A photo on the troupe's website shows Perez standing proudly atop a comically small stagecoach, dressed in 19th century/Burner garb while a woman in petticoats stands on his shoulders. His Facebook photos show him happily performing feats of slacklining, capoeira, and acrobatics on stages, parks and even classrooms around San Francisco and elsewhere.

As for what took the cops so long to arrive? BART spokesman Jim Allison says there were no BART PD officers nearby when the incident occurred, but that they arrived on the scene in seven minutes. (We should note that there was a second incident happening at the same time in which a person was spotted walking into the BART tunnel between 16th and 24th Street stations. This may have led officers away around the same time Perez started literally flipping out.) SFPD officers arrived a minute earlier and made the arrest, apparently without much trouble.

Although presumably safe to say that Perez's antics won't be allowed back on BART soon, police no longer know where he is. After his initial arrest, Perez was taken to California Pacific Medical Center for a psychiatric evaluation. He was kept on an emergency psychiatric hold, but released at some point later — BART has no idea when — and there is currently an outstanding warrant for his arrest on suspicion of misdemeanor battery.

Meanwhile, the Chipotle Cultivate Music Festival, whose ads are featured all over the video (a video that includes a violent sexual assault), thinks that their cameo is "super funny."

The 12th Annual SF DocFest has hit the Bay Area, and that means dozens of films providing "a manageable amount of truth" are screening for your enjoyment. (Side note: can you handle the