Police are on the lookout for a brazen bicycle bandit after the thief hopped on one very unlucky commuter's ride and sped off while the owner stopped to cheer on other bikers at an energizer station on Market Street. As if to further deflate this year's Bike To Work day, the grand theft bicycle happened right in front of a brand new bicycle counter and the news crews who were there to document the bike-friendly atmosphere.

Ramon Solis, the owner of the bicycle, says it was worth a cool 1,300 bucks. Which means it will probably fetch $30 - 50 on the black market. "He was on my bike and I was on foot," Salis told ABC7, "and I have imagined myself in this situation so many times, but I couldn't catch up to him." Police arrived later (in cars) and told the victim they would be on the lookout for his sweet ride.

No word yet on how Solis managed to get the rest of the way to his office, but assuming thievery is this suspect's full-time occupation, then at least one of them got to ride a bike to work today.

Mayor Lee, who also rode his bike to work today, didn't witness the incident, but he did Instagram a photo from the very same spot in his beloved Mid-Market neighborhood.

Update: Ramon, who is very active in the local bike community, writes in to ask anyone in town to keep a lookout for his ride. It's a 53 cm Bianchi Axis with a cartoon sticker on either side of the fork. If you spot it, or accidentally buy it on the black market, you can contact Ramon on his twitter: @salmonsoir 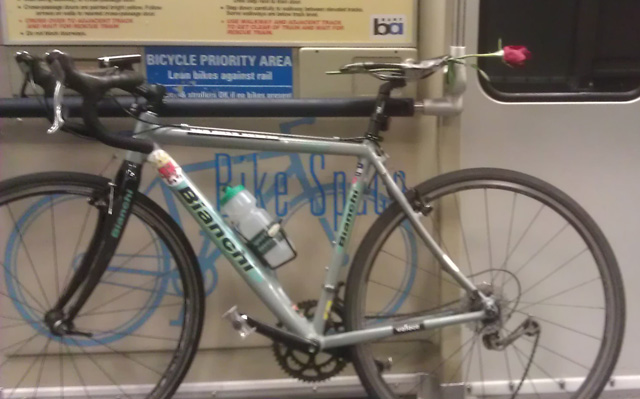 His last name is also spelled "Solis," which ABC7 originally got wrong.

One member of Swedish team Artemis Racing was killed earlier this afternoon when his team's 72-foot AC72 catamaran capsized during practice runs near Treasure Island on the San Francisco Bay. The sailor was

Rachael Schafer snapped this shot of bacon being cooked/kept warm on someone's dashboard at Sanchez and 23rd in Noe Valley. Schafer tells us, "We were just strolling by...pushing strollers and there