As (comparatively) warm weather approaches and the Giants head into a long summer stretch, isn't it time you checked out one of the many fine watering holes along the waterfront? We're not talking Fishermen's Wharf, but the spots locals flock to during weekends and after work. Here are our suggestions; we're certain you'll let us know yours in the comments.

BAY VIEW BOAT CLUB
It's friendly, cheap and right on the water. The catch? This old-school dockside bar is for members only, or friends of members. The other catch? To become a member you need to pay dues and own "one-quarter interest in a boat". No boat, no service. But you can get around this injunction by becoming friends with someone who's got a stake in the boat club, and when you do, this'll become your go-to spot for sunny Sundays by the water. The Bay View Boat Club has got it all, from maritime charm and no-nonsense service to friendly locals and a picturesque backyard garden that meanders along the bay's edge. Any members out there looking for new friends? Let us know!
489 Terry A Francois Boulevard 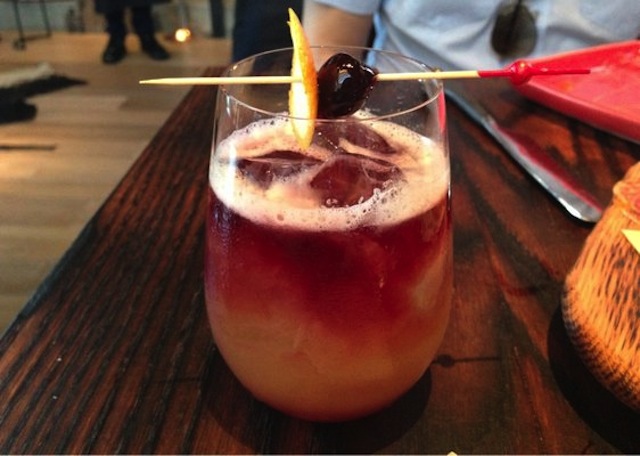 COQUETA
The newest spot on this list is Michael Chiarello's barely two-week-old Coqueta on Pier 5. They took the former Lafitte space, with its semi-enclosed outdoor seating area, and created an awesome glassed-in bar where the back of the bar is just water, Yerba Buena Island, and sky. It's a Spanish restaurant, and the bar  dubbed Bar 5  serves just tapas and drinks, none of which are cheap but which are pretty high quality. And you should note that the bar is mostly first-come, first-serve, with some stools and a counter circling the glass perimeter. Go for one of the Spanish-style gin and tonic variations, flavored with various fruits and botanicals, or a nice glass of sangria on tap.
Pier 5, Embarcadero and Washington 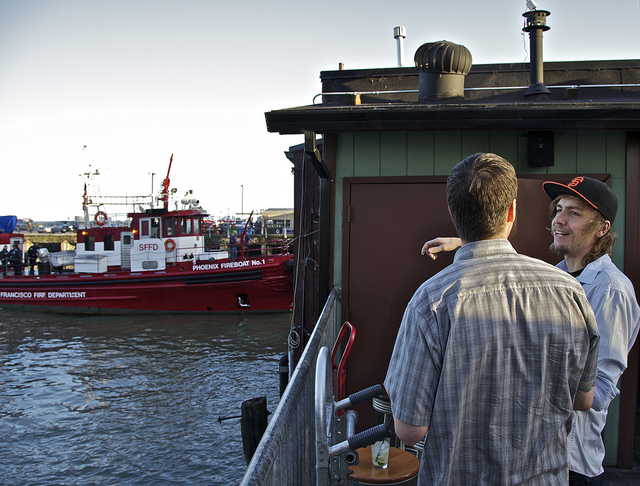 HI DIVE
Located at Pier 28, Hi Dive looks like a dive bar from the outside, but has pretty nifty art deco interiors once inside. They've got a menu to satiate any booze-drinking (think: fried stuff, burgers) and million dollar views of the Bay. But the best part is the outside patio, perfect for getting lit before heading over to AT&T Park to catch a Giants game.
Pier 28 1/2, The Embarcadero at Bryant 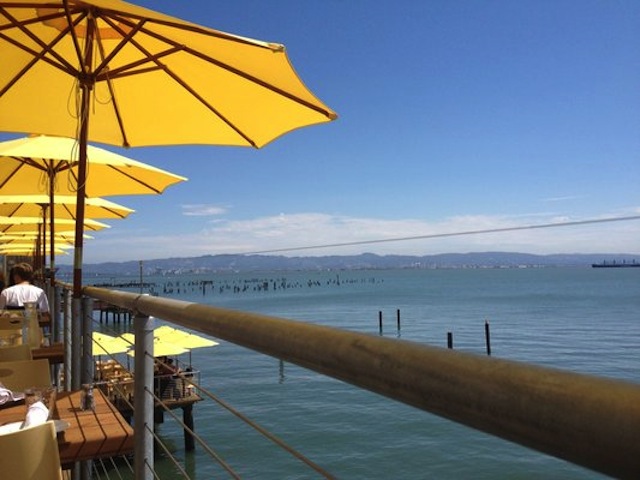 MISSION ROCK RESORT
A stark contrast from some of the more divey waterfront options around SoMa and Mission Bay, Mission Rock Resort classes things up with an overwater patio that wouldn't feel out of place on a lido deck. Come at dusk to slurp $0.99 oysters and $4 drafts during happy hour, or catch the morning sun over the Bay with Eggs Benedict and a couple mimosas at brunch.
817 Terry A Francois Blvd between Mariposa and 16th Street 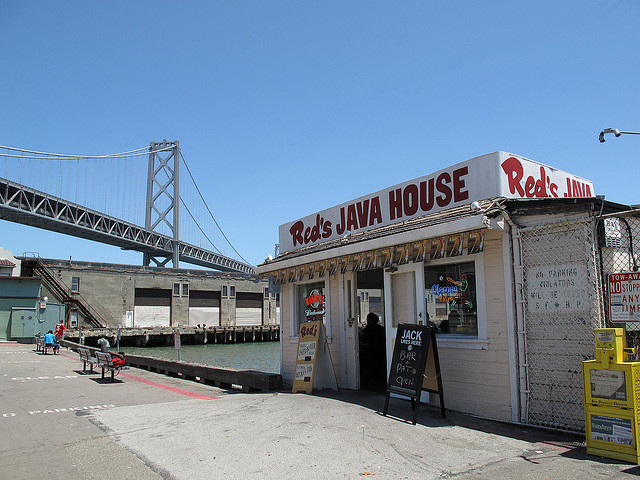 RED'S JAVA HOUSE
Despite what Anthony Bourdain proclaimed on his food expedition to the Bay, the burgers at Red's are not the real draw here. (Although we do respect their strict "No lettuce and tomato" policy.) It's the plastic chairs, faded umbrellas and warped wooden tables set out on a crumbling city pier that make Red's the ideal waterfront dive. Garlic fries negate any fishy breezes coming off the waterfront and there's a full bar — if you consider a rack of mid-shelf bottles a full bar — but you'll want to order a bucket of something bottled, cold and domestic to stretch your a lunch well into the afternoon. (And get those drinks in quick, folks, the Golden State Warriors will be taking over Pier 30 by 2017. While they've promised to keep Red's intact, we just can't see it being quite the same.)
Pier 30, The Embarcadero at Bryant 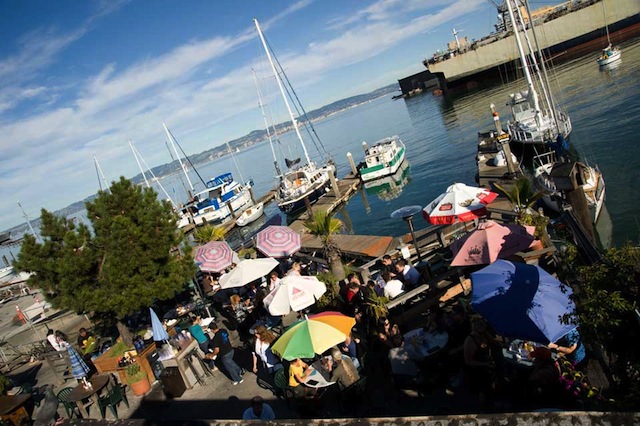 THE RAMP
An institution since the 1950s, the Ramp remains one of the best spots in the city to recover from the night before with a hearty brunch. They serve lunch, brunch, late-night appetizers, and daily Happy Hour specials year-round (rain or shine!). And from May through October, you can dance outdoors to live Salsa and Brazilian Cumbia while enjoying the outdoor BBQ.
855 Terry A Francois Boulevard 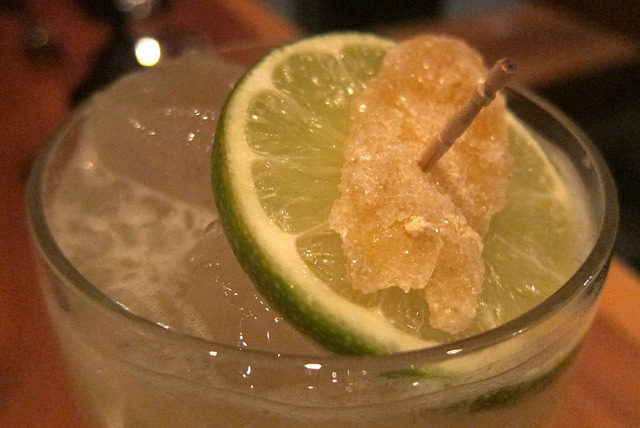 SLANTED DOOR
The restaurant anchor of the Ferry Building has what many consider one of the best cocktail programs in the city, spearheaded by bar manager Erik Adkins. Adkins is a devotee of the classics, and though Charles Phan's Vietnamese cuisine demands some tropical flair, Adkins is careful to keep the drinks, like his Singapore Sling, tasting fresh and balanced, as opposed to the over-sweet Tiki drinks they morphed into over the years. The place gets crowded with corporate types most evenings right after opening, right at 5:30, but if you can snag a seat at the long bar, with the Bay and the Bay Bridge just over your right shoulder, and order a few fried things to go with your cocktails, you'll feel like you've arrived.
1 Sausalito - San Francisco Ferry Bldg #3

While your SFist editor doesn't harbor a fetish for feet (quite the opposite), we do have a thing for shoes. Which is why we will now use our onslaught of party invites to

Sir Ian McKellen and Sir Patrick Stewart — two of the greatest actors on this planet, Middle Earth or the final frontier — will grace the stage in Berkeley for four weeks this summer theater