In 1878, roughly a tech entrepreneur's lifetime after gold was discovered at Sutter's Mill, and just as long before the Great Earthquake leveled much of San Francisco in 1906, the city was smack in the middle of its earliest boom. Proto-photographer Eadweard Muybridge, who spent much of his early career shooting landscapes in Yosemite, took his camera to the top of Mark Hopkins' mansion at the corner of California and Mason Streets on Nob Hill to document a city whose population had exploded 200-fold in three decades.

To get your bearings in the panorama embedded below: Alcatraz, sans prison and mostly inhabited by pelicans at the time, sits in the distance on the far left with Angel Island behind it. In the third frame from the left, we can see Yerba Buena Island with California Street in the foreground running down the hill towards the bay in the foreground. (Here's the same view from the somewhat taller Mark Hopkins Hotel today.) In the middle of the panorama, we can see most of SoMa was still a giant inlet at Mission Bay. On the far right, we see California Street again, this time running West towards Van Ness and the Outerlands.

At this point, Grace Cathedral was nothing more than a chapel on a mound of dirt and the Fairmont Hotel appears to be a pile of discarded lumber in someone's backyard.

On the other hand, the white monstrosity about a block down California Street (roughly where the Huntington Park is today) was home to railroad magnate Charles Crocker. Crocker was both a young money entrepreneur and a bit of a prick, it turns out: he made his money by starting his own iron forge in 1845 at the Zuckerbergian age of 23. He would go on to become an investor in the Central Pacific Railroad, along with Mark Hopkins and Leland Stanford, eventually helping to build the First Transcontinental Railroad — which was like the Facebook of railroads at the time (because of how it connected everybody and all your friends were on it).

Because the lawless Gold Rush town hadn't quite figured out things like building height restrictions or environmental impact studies, Crocker famously spent $3,000 (or nearly $70,000 in 2013 currency) to build a three-story tall fence around his neighbor Nicholas Yung's entire home and property, simply because Yung — a poor undertaker — refused to sell the land so Crocker could own the entire block.

The "Spite Fence," as it was called, was over 25 feet tall and almost completely blocked out the sun. The Yung family considered leasing the lot to a Chinese laundry or selling advertising space on the fence just to piss off the rich asshole next door, but Yung's wife decided she would rather not stoop so low. The fence (highlighted in blue below) stayed up for nearly 30 years, and was finally taken down in 1904, well after Yung had passed away. 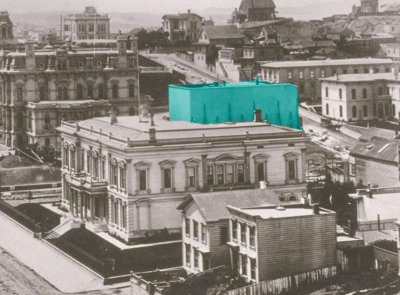 In the scenic vistas of Yosemite Valley, park rangers see more drug arrests per 100,000 visitors than any of the country's most-visited national parks. In the past year, 855 people were busted

Welcome back to Etiquette Week on SFist. Yesterday, we taught you how to drive in San Francisco without being a jerk. You're welcome. Now we tell you all about your mom's favorite social

—
History Lesson: A Privileged Panorama Of Nob Hill, Circa 1878
Share this