Thirty-five people were arrested during last night's World Series celebrations out in the streets of San Francisco, but not before one innocent bystander was injured: a Muni 9-San Bruno 8x-Bayshore bus that went up in flames on Market Street.

Below, video of the burning bus and a few more shots of the carnage.

Another shot of the torched Muni coach has been making the rounds on both Twitter and Instagram: 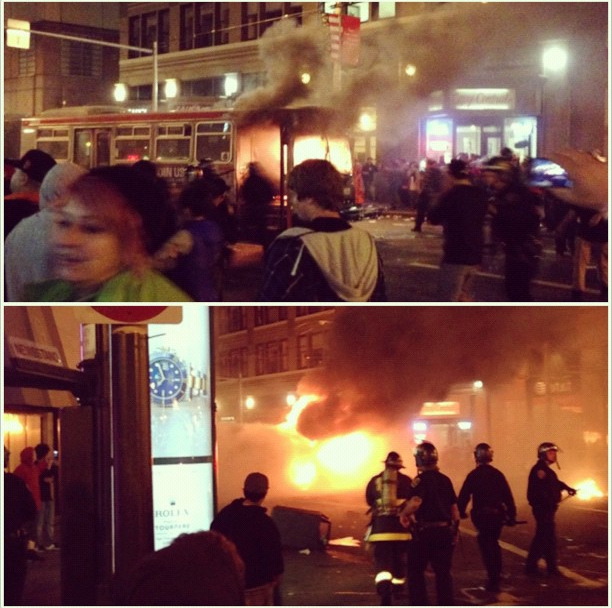 Related: We've also heard several reports that a fire engine left idling by SFFD firefighters was stolen by a (possibly drunken) reveler. With a lot of misinformation going around on twitter last night and this morning, we can't immediately confirm the story. We will most certainly be updating once we can.

Update: Muni spokesman Paul Rose tells SFAppeal that the burned-out bus had just been revamped and was worth a cool $700,000. Ouch.

As for the story of the stolen SFFD fire engine, there appears to be no truth to those twitter rumors at this point.

Joining such neighboring businesses as Happy Donut, McDonald's, Zeke's, and SFist headquarters, exemplary two-star Michelin joint Saison will pack up its belongings in the Mission and move to eastern SOMA by mid-December of

Mix a Giants victory parade with Halloween revelry and you'll get one of the largest, most colorful celebrations this city's has seen in eons. On Wednesday, San Francisco will honor your the Giants