As City Insider reports, Supervisors Chiu and Elsbernd are reconsidering Muni's decades-old policy regarding strollers on the bus in an effort to keep families from fleeing the city at the alarming rate we keep hearing about. Although, we'd like to point out that the Chron article to which everyone keeps referring and that keeps getting recycled every year says that there are actually 3,000 more children under the age of 5 in San Francisco than 10 years ago. It's the school-aged children that we've actually been losing (more than 8,000 over the age of five). But maybe we're just niggling.

Muni's current policy is that all strollers must be folded up and babies held. Supervisors Chiu and Elsbernd are proposing that Muni consider allowing babies to remain strapped in the strollers with the wheels locked if they’re not blocking the aisle. They also propose that parents with strollers should be allowed to board the bus using the wheelchair lift and receive secondary priority for the front seats after seniors and disabled people. We assume this means that a section of the priority seats would need to be folded up — just like with wheelchairs — in order to accommodate open strollers in the front of the bus. Otherwise they would certainly end up blocking the aisle. 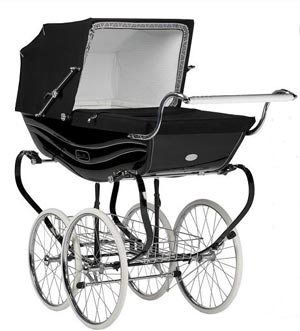 First of all, the layout of Muni's buses needs to be more accommodating to people with bulky items in general — not only strollers but items such as luggage and grocery carts as well. Take AC Transit, which does allow open strollers. Their system features low-floor vehicles, making it quick and easy for wheeled-items to be brought in through the front via the wheelchair lift and taken out through the back door, and a large open area with seats that stay in the folded up position unless flipped down for additional seating. We've always been impressed with the layout of AC Transit buses and have wondered why Muni hasn't followed suit. (See Mission Mission for more reasons why AC Transit is awesome.)

Second of all, Muni needs to run on time and more frequently (we can only dream!), so the buses and trains aren't so crowded that you can hang onto your groceries or kids. We personally would never want to cram a stroller onto Muni with our kid in it for this very reason. We've always worn our toddler in an Ergo, and now, she's old enough to walk to the bus stop and sit like a "big girl" — some of the time. (Except, we have encountered quite a few excruciating fits and subsequent premature exoduses on Muni recently. Ugh.)

Additionally, we've always thought inserting a folded stroller on the bus's bike rack would be a handy idea.

We took a brief look at our peers in the Pacific Northwest to see if their transit systems are more accommodating, and we were disappointed. Their strollers-on-transit policies are the same as Muni's. A couple of others cities that do allow open strollers are Chicago and Copenhagen (and get a load of the monstrous strollers that are all the rage in Denmark — pictured at left!).

If you lived in Copenhagen, you'd be able to park this baby in priority seating on the bus and on the train.