A group of 50 or so gathered outside the state building on Golden Gate this afternoon to protest the state budget cuts that are causing the S.F. School Board once again to announce possible layoffs of 485 teachers. Can you spot Frank Chu?

Also, our favorite sign of the bunch: Don't Cut Our Budget or We'll Cut You! (see below)

It should be noted that this happens every year now. State cuts prompted a similar announcement by the School Board last spring, but the layoffs were rescinded after the city pitched in $6 million from its rainy day fund. Something similar will likely happen again, but the board is legally obligated to give teachers notice of possible layoffs by March 15 every year. Also, about a half hour ago, an adorable protest involving about 30 children and some drums, moved up the sidewalk along Market Street. 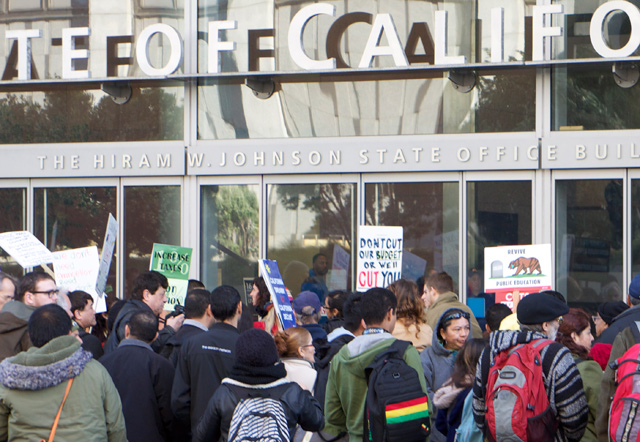 The majority of San Francisco doesn't care much for car racing, we can safely assume. It's more geared toward a different type of audience. More or less. But that didn't stop Daytona 500