During a weekend of inaugural festivities at and around City Hall, noted former Mayor and local gadabout Willie Brown threw a party for apprentice-Mayor Ed Lee. Held at the Palace Hotel's Garden Court just off Market Street on Saturday night, Willie's event was an invite-only affair. Assuming my invite had been mistakenly sent to the wrong address or something, I showed up to the Palace Hotel's Pied Piper Bar & Grill, arm candy in tow to down Manhattans until we could summon enough liquid courage to slip past Willie's hired goons and enjoy the privilege of purchasing a wildly overpriced cocktail while listening to a cover band play for various city luminaries.

Not wanting to interrupt the seated dinner portion of Willie's big night, my companion and I waited it out at Maxfield's Pied Piper Bar, which is probably the only bar in San Francisco named after a famous painting. The Pied Piper serves up some truly atrocious pub mix, but the bartender compensated with a nicely balanced Manhattan. As if you could forget you were drinking in the oppressive presence of Neo-classicism, they definitely remind you in the drink prices. Meanwhile, in the banquet hall, Willie and 299 other special guests were dining on a menu that included the least vegetarian-friendly Winter Greens salad on the planet and an entire course dedicated to Garden Court Biscuits.

After spotting District 9 Supervisor Sean Elsbernd exiting the men's room down the hall, we figured the dinner portion of the night must have concluded. So we walked right in to the Garden Court, laughing amongst ourselves in a way that seemed like the kind of thing important people do while casually walking in to a party thrown by an avuncular former Mayor. Behind the doors of the banquet hall, just off the famous Garden Court, we were greeted with the dregs of a bacchanale that was frankly impressive given the 1%-friendly prices at the (shockingly!) un-hosted bar. 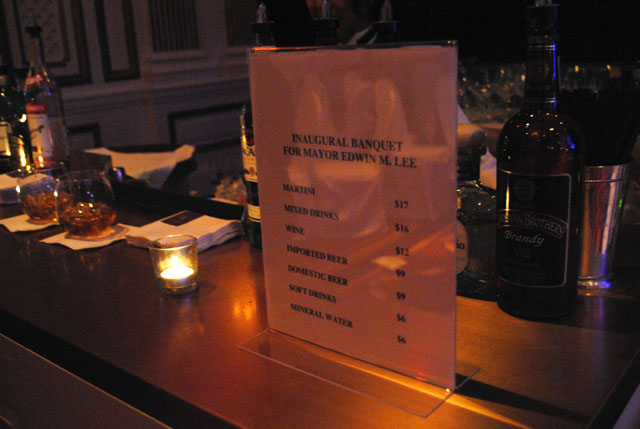 Still, the $17 martinis were not expensive enough to keep this unidentified white guy from cutting loose to Beyoncé covers:

A couple covers later, having spent $32 on Bulleit bourbon on the rocks and no sign of Mr. Brown in the general vicinity, we slinked out past the folks paying their respects to Rose Pak and back to our stools at the Pied Piper. There, we found one disgraced former Muni Chief sulking over a drink while Willie Brown, Da Mayor Himself, received praise from his seat across the room at the corner of the bar. 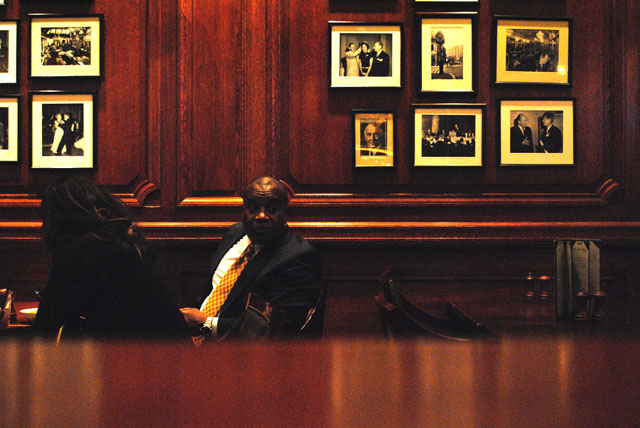 Things got a little hazy for us from there, but Willie was surprisingly friendly towards us when we made his acquaintance — although that might be because we left out the nature of our regular Friday column. Light grilling revealed nothing about Willie's relationship with Subway sandwiches (a burning question we've been saving for an in-person encounter with his mayoralness). Willie did introduce us to his son and charming daughter-in-law, however. Willie described to us in great detail what complete idiots 100% of the GOP candidates for President are, before summoning his "friend" Sonya and his topcoat. After politely giving us a goodbye fistbump, Willie headed out, back down Market Street, possibly in search of a late night Footlong Italian Sub with all the fixins.

According to a late report from the Examiner this evening, a woman was reportedly raped after she met a man downtown who offered her a drink. The woman told police that she accepted

Tourist time at the Japanese Tea Garden. [SFGate] Is this the Facebook profile of suspected Mission rapist Fred Dozier? [Uptown Almanac] Another rape suspect tried to pick up a female San Francisco cop