As the Occupy news turns from protests to campouts, we bring you a roundup of notable opinions on the camps, the protesters and the movement itself.

In national Occupy news, The New Yorker meets Kalle Lasn, founder of Adbusters magazine and the man credited naming the Occupy Wall Street movement and coming up with the idea to build an encampment in the heart of New York's financial district. In addition to filling in the background narrative behind the movement, the piece elaborates on those Phase II plans we heard about last week. [NewYorker]

Over the weekend the Chronicle's Chuck Nevius — who has had quite a few opinions on the encampment down on Justin Herman Plaza, most of them related to bleaching the everliving crap out of the whole area — had a change of heart and offered some advice on how the Occupiers could hold out as long as possible. The whimsical affair we saw after Occupiers shut down a Bank of America branch is what will attract broad support, Nevius points out. [Chron]

Also over the weekend, Daniel Ellsburg, the man who leaked the Pentagon Papers to the New York Times in 1971, gave an inspiring speech at Occupy SF.

Up in Santa Rosa, a little bit more than half the local camp was evicted by local police early this morning after protesters themselves complained that the site had turned in to a homeless camp. 18 tents that had camping permits issued by the city were allowed to stay, while the other 26 were ordered to clear out. No one put up a fight and no arrests were made. [CBS5]

Over in Oakland, Occupiers set up camp on the lawn of a foreclosed home at 18th and Linden Streets. The Occupiers had the blessing of the home's former occupant, but nobody seemed to be sure whether the lawn "was technically bank owned property" at this point. They should probably assign someone from the Occupy Research Committee to figure that out. [CBS5]

Back on Justin Herman Plaza, the Examiner talked to some Occupiers, most of them from out of town, about how they were holding up in the recent rains. The consensus (which didn't need a General Assembly vote, for once) seems to be that rain is generally cold, damp and not an ideal time to be camping. [SFEx]

DPW Director Mohammed Nuru, meanwhile, continues to tweet friendly reminders telling Occupy SF campers to keep it clean and cut out some of the tents:

All while lording over the scene from the the swanky roof deck at the Hotel Vitale: 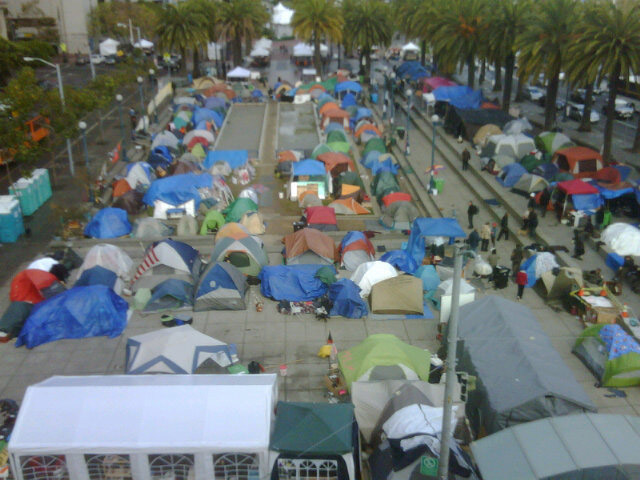 HIP-HOP: Hip-hop collaborators Shwayze & Cisco Adler will be at the Independent in support of their new album, Island in the Sun, which is a "tribute to the life of deceptive leisure the

The decades tick on, but the nation's fascination with and collective grief for John F. Kennedy's assassination remains constant, even today as we mark the 48th anniversary. Above you can see a stabilized