Free alternative weekly newspapers are the voice of the people, right? Nothing says, "I am the 99%" quite like proudly reading a free newspaper on public transit. So, with that in mind, we ought to treat them with the deep respect they deserve on an important day like today. Plus, if things get really rowdy, you could always use the paper to set fire to a local branch of your least favorite megabank. (Not that we'd encourage that.) March forth, to the stories:

East Bay Express - It's Oakland's big day, so we'll start with the scrappy East Bay paper:
Worth Reading: The printed paper may not be as nimble as the Express reporters on the ground at today's protests, but the cover story "The Whole World is Watching" is still worth a read to some perspective on the scope of media coverage that followed last week's violent protests in Oakland.

In a story laced with race and sex issues, Steven Tavares details how the San Leandro Police Department plotted to take down one of their finest officers in "The Making of a Police Scandal".

Also, this week's horoscope might be directed at the Occupiers: "Eccentric astral winds blow through the ethers this week, shifting the psychic air and cleaning out the cobwebs of stagnant situations." No way to know what Ralfee Finn meant by that, really.

Don't Bother: Stoners and Drug Warriors do battle over online polls. Come on guys, we're talking about online polls here. Maybe chill out a little bit? Split a joint or something? 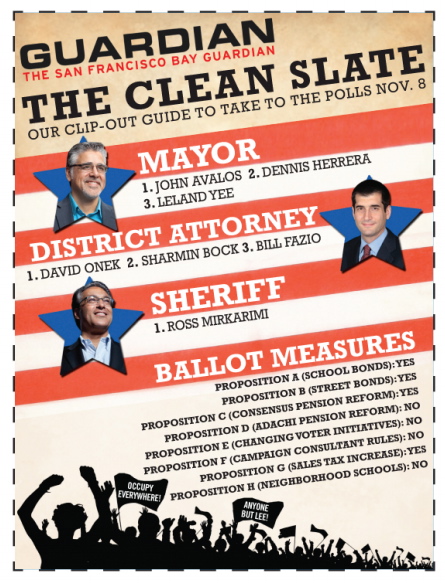 SF Bay Guardian On the cover this week is the Guardian's handy cut-out voter guide, which you can take to the polls with you in case you need someone to tell you who to vote for. But you might want to actually read their endorsements first.

Worth Reading: Here's a whole Steven T. Jones piece about how a 17th Century British anarchist became a symbol of American resistance. (We're talking about the Guy Fawkes masks again.) It's kind of like reading Wikipedia, but with fewer links to distract you.

Funny:These 5-Hour Energy spinoffs are getting ridiculous. Here's one that has both marijuana and an aphrodisiac in it.

Don't Bother: Multiple "anybody but Lee" articles in this week's Guardian. You can probably guess what Aaron Peskin and Tim Redmond have to say about the interim mayor.

Also, we still haven't been able to figure out what the hell this Cheap Eats column is all about. This one might be about baseball or something?

SF Weekly Over at the Weekly, they're pushing new data about "The TRUTH behind Sex Trafficking", complete with a note from the editorial staff writing off the claims that Village Voice-owned Backpage.com is partially responsible for the practice. The whole thing is kind of yucky, but we'll leave it up to you to decide what goes on in the back pages of the Weekly.

Worth Reading: Jonathan Kauffman's review of the hit-or-miss Grill House Mediterranean. Worth reading because we like to keep tabs on the city's shawarma options. This place sounds like you're better off with the kebabs.

And, sure this one's from the web, but we were also wondering when Ryan Gosling was going to put out another album. Dead Man's Bones was spectacular.

Funny: No new Bouncer this week? What gives? We'll just go back and read last week's encounter at the Buckshot, we guess.

Don't Bother: "Mormons: A Shallow Yet Helpful Guide to See if You Should Hate Them or Not" is every bit as shallow as it claims to be and even less helpful than advertised.

The scene at 14th and Broadway, noted as the Occupy Oakland epicenter, has grown in numbers as the morning wears at today's general strike. With chants of "take the streets, take the streets"

Oh brother, do we love us a plateful of deviled eggs during the summer months or after a night of binge drinking. And how. Packed with protein and family-picnic memories, the deviled egg