We briefly mentioned The Ed Lee Story: An Unexpected Mayor in yesterday's Day Around the Bay, but the book's sudden cult following (or backlash, if you prefer) is worth a mention of it's own. The 127-page book cost $88,000 to print 50,000 copies and was paid for by a nebulous independent expenditure committee, but we can't fault it for doing what it says — telling the Ed Lee story from his first date in a Hong Kong McDonald's to revealing his secret recipe for ketchup-sauced spaghetti that he got from Rose Pak. (It also only takes seven pages to get to Willie Brown.) With gems like that, it's no surprise someone was trying to unload this priceless piece of literature on Craiglist for $75,000: 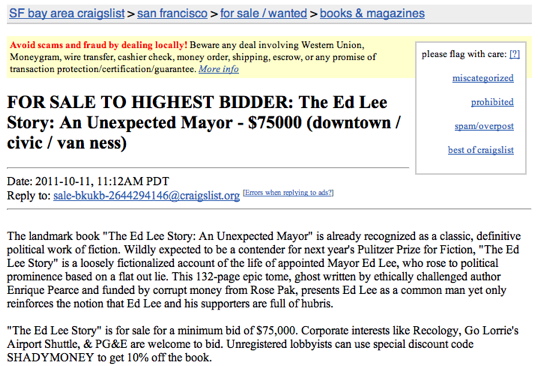 From the same Craigslist ad, (which was already flagged and taken down as of this morning), we also got the following scathing early reviews:

"This book was better than Twilight. After finishing this book, readers will likely decide they're no longer Team Edward or Team Jacob, but they'll be with Team Ed, uh, we mean Team Rose." - Boston Review

"Our only disappointment was that we wanted to read a chapter describing how Ed Lee parted the Red Sea and walked on water." - San Francisco Chronicle Book Reviews

While we're a little bummed we won't be able to fork over a decent household salary for the book, those of you lucky enough to find one of the free books on your doorstep should know there's already a book club where you can meet other eager Ed Lee fans. It meets at the Chinese Chamber of Commerce on October 31st at 6 p.m. and the cover charge is a $25,000 donation to Rose Pak. (Of course.)

Park renovations are coming along nicely. They apparently include a new welcome sign and a laundry list of rules that we're skeptical any of the Dolores Park regulars will ever be following. Hat

The proposed Transbay Tower, which you should know is going to be very tall and very adjacent to the rebuilt Transbay Terminal and it's 5.4 acre park, has hit another road bump