If the nonstop whacky antics at yesterday's Board of Supervisors meeting are any indication, we're looking at what could be an exciting fall in City Hall. By which we mean, no one appeared to be falling asleep yesterday.

The fun all started when Supervisor Wiener arrived to find his seat covered to protect the cleanliness of the Board's temporary digs in Room 416. It was actually pretty considerate of Supervisor Elsbernd to put that there. The folks from DPW have been known to hold meetings in the same room and you know those guys are sticklers for sanitation. +1 as Sean Elsburned strikes again. And +1 to Scott Wiener for not taking this one sitting down (sorry), and firing right back during introductions. If you guys ever do head down to Jane Warner plaza for coffee, please don't hesitate to call us.

Moving right along, even soft-spoken Richmond Supe Eric Mar wasn't afraid to speak up when Clerk Calvillo accidentally left someone off the roll call: "Madame Clerk, I think you left somebody out..." says Eric Mar. 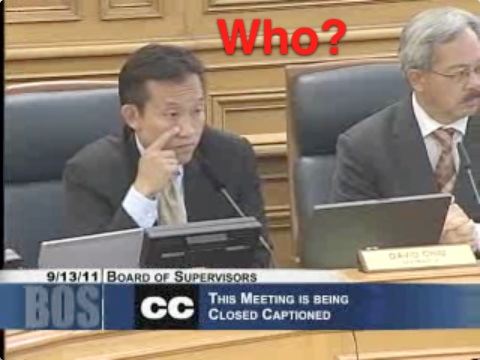 Thinking he was making a reference to Mayor Ed Lee, Calvillo added "Mr. Mayor" to the roll. To which Lee responded with a confused and gradeschool-like "Present" before Eric Mar pointed out that, "Supervisor Mar is also present." Haha! Oh right. Eric Mar. Is he funny or something?

With everyone present and accounted for, Mayor Lee tackled some tough questions in his first question time before the board since he announced his candidacy for full term. Supervisor Avalos, who has been a vocal opponent of the pre-submitted questions since we started this Question Time deal back in the Spring, posed the most interesting question, from our perspective. Avalos snarked on the current format, saying it led to, "not really discussions, but presentations" and asked for the Mayor's thoughts on having a "more dynamic interchange".

The meta-question unfortunately still had to be submitted ahead of time, so Mayor Lee's scripted answer was another snoozer. Although he did admit his presentations, "might not be great for blogs". We'll just go ahead and assume he was speaking directly to us, so we'll gladly critique his work: No, Mr. Mayor, your answers are not very good for blogs. In the future please craft your answers to be more blog-friendly. Talk about cats and trampoline accidents. The Internet loves those. -1 to Mayor Ed Lee for saying "he's not here to generate headlines", even though that statement later became a headline. On the other hand, here's a hearty +1 to John Avalos for leading the fight for Question Time Reform. 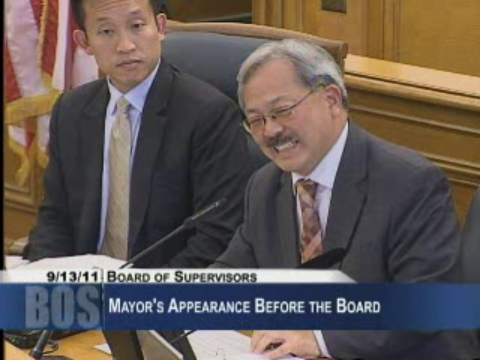 Next up, Lee and Avalos will be taking their battle to the mean streets of Chinatown for a ping pong battle on Grant Street during this weekend's Sunday Streets. Lee obviously has the homefield advantage there, but Avalos (who used to play every day when he worked at the Boys & Girls club) sounds like he's ready for the challenge. "Game on, everybody!" says David Chiu, suddenly desperate for attention after noticing the other two mayoral candidates in the room were hogging the spotlight.

Speaking of shining a light on David Chiu's campaign, the North Beach supe was all over Market Street yesterday. Not only did he drop an email blast and blog post outlining the permanent changes he wants to make to create a more pedestrian-friendly Market Street, but he also brought the issue up to the mayor during question time and later introduced new legislation to go along with it. We don't suppose there's anything too unethical about using your work as a supervisor to further your mayoral campaign (or vice versa), so if you do decide to vote Chiu for Mayor rest assured that the guy is really good at scheduling. +1 to David Chiu's various staffers, campaign or City Hall, but -1 to Chiu himself for missing a huge opportunity to throw in a Wayne's World reference.

Something's been off for the normally effusive Jane Kim. She hasn't quite been quite on point since returning from recess. (And yes, Burning Man, if we must dwell on that.) She was looking incredibly restrained and actually a little bit nervous yesterday. Wearing a somber black outfit and sporting a feathery new 'do, Kim kept her gesticulatory hands out of view as she stumbled through the four items she introduced during roll call. We don't don't really know what those items were though, because approximately 50% of the noises she was making in to the microphone were "umm.." -1 to Jane Kim Get thee to an improv class or something. Yeeesh. 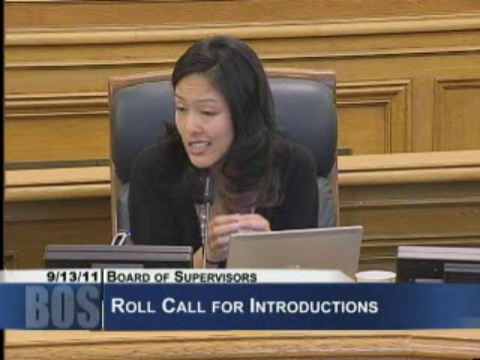 Meanwhile, Malia Cohen is over here nonchalantly calling for a hearing to make sure the Navy is held responsible for cleaning up the mess they left at the Hunters Point Shipyard. And with such effortlessly modest style:

Supervisor Mar wants to hold a hearing to discuss the impact that festivals like Outside Lands and Hardly Strictly Bluegrass can have on the surrounding neighborhoods. He also wants us to know about this really lengthy list of bands who are coming to play at Hardly Strictly Bluegrass and that he thinks [Nerd alert!] this year's festival "could possibly be the best one yet." It's not all bluegrass, you guys! Still, we have to give him a point for being the only supervisor to ever mention "Zigaboo Modeliste, King of the Funky Drums" in a meeting. +1 to Eric Mar. 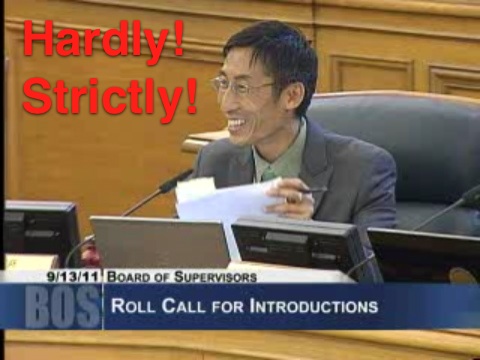 One lengthy public hearing about extending the Fillmore Community Benefit District later and that was pretty much all the meat on yesterday's meeting. We have to admit we like where these kooky antics are going. If we keep up at this rate, we might be looking at scores in the 20s by mid-October. And given the current state of the Giants that might be the only action we have to look forward to in October. Well, that and this Ed Lee vs. John Avalos epic ping-pong match on Sunday.

Avowed racist and all-around liar Michele Bachmann is currently hosting a breakfast fundraiser in San Rafael this morning. Costing $1,000 plate, the fundraiser will help go to her deplorable and increasingly hysterical

As they say, "If you can't win the pennant at least annoy the Padres". And the Giants did just that by closing out the sweep of the Friars with a 3-1 game three.