Coming to you late this week due to a few technical difficulties with the post-recess SFGovTV feed, we now return to our regularly scheduled Weekly Power Rankings. This week, just gettin' back in the swing of things:

First of all, check out these new digs in the Board's temporary home, Room 416: 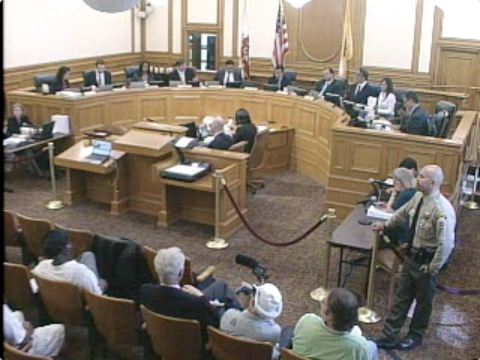 We kind of feel bad for Clerk Calvillo, who has been moved from President Chui's right-hand spot to a floor seat where she will be subjected to all sorts of spittle and splatter from public commenters at the podium, but we're digging this half-moon layout. Very Grecian Senate.

As for the meat of the meeting, we've already heard about Ross Mirkarimi's new entertainment permits. And it was good to see Mr. District 5 has been working on his New-Sheriff-in-Town coiffure. Show us your best Blue Steel, Ross: 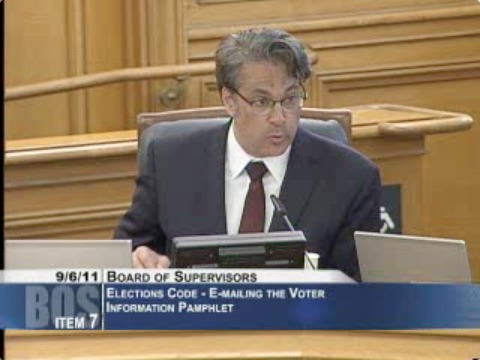 With the permits passed, Ross went on to save us from another mess of paper in the ol' mailbox by passing legislation that would allow the Department of Elections to send out Voter Information Pamphlets via email instead of bulky paper packets. Perfect, we love troubadours and we hate paper, so that's an easy +1 for Ross Mirkarimi. We'll be interested to see how that hair holds up during this weekend's Sunday Streets event in his district. Even supervisors wear helmets!

After dissolving a whole crapload of of board and commissions (Drug Abuse and City-Wide Alcoholism Advisory Boards, Presidio Neighborhood Representative Work Group and the Mayor's Criminal Justice Council), the board moved on to roll call for introductions. Scott Wiener introduced his somewhat controversial (but is it really?) public nudity legislation. Not only do we think it's a fine piece of legislation, but Wiener delivered it with all the sensitivity we've come to expect from the lanky one. We imagine the only people who will get upset about this legislation will be the nudists themselves. And well, they're just trying to get a rise out of us anyway. +1 to Scott Wiener.

President Chiu introduced legislation to create an open budget database. It sounds a little mundane when you hear it read during the meeting, but we're sure the wonks will find some use for this once it is in place. And anyway, get used to hearing about it, we're sure Chiu will be bringing it up repeatedly as he pedals his way to November.

We were kind of hoping the candidates for mayor on the Board would start slinging mud in the meetings to make things interesting, but sadly most of Tuesday's supe-on-supe commentary was pretty tame. (We must have heard half a dozen variations on, "I look forward to engaging with my colleagues on this matter" - snooze.)

Although we did get in to a rough patch once John Avalos introduced legislation that would shut down the city-owned Sharp Park Golf Course and hand over the land to the National Parks Service in order to protect an endangered species of frog. Sean Elsbernd took an swing at it right away, wondering aloud (and quite sarcastically) what NPS' off-leash dog policy would be in that case and if off-leash dogs would be more or less of a threat to an endangered species than a golf ball. WHAM: Elsburned does not take recess: 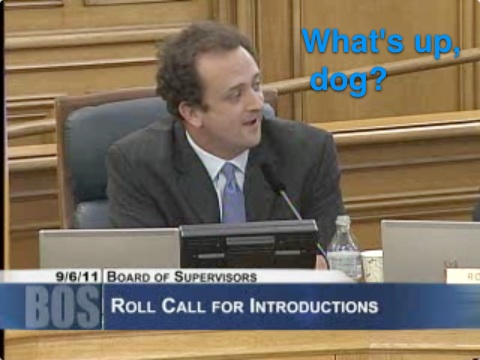 But Avalos, who's been on his toes with all the debates lately fired right back: There are twin foxes living in Sharp Park. And he's preeeetty sure those are members of the canine family, right? (Hint: yes.) 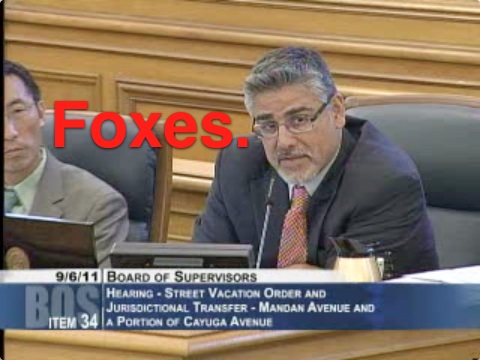 Neither of those actually got us anywhere, but this should be a fun one to watch down the road. +1 to Elsbernd and +1 to Avalos for rolling their sleeves up right from the start.

Regarding any lingering effects or brain damage that might have occurred while our Burner-Supes were in close proximity to massive amounts of Playa dust during Burning Man last week: we didn't notice any erratic behavior from Supervisor Mar, but Supervisor Kim seemed a little frazzled after speaking for a few minutes on the subject of an environmental review for an AT&T antenna on 4th Street. Kim, who had been keeping it together for the majority of the meeting, suddenly forgot how Board meetings work, had to apologize and even made a pouty face like she was very confused and upset about her brainfart before President Chiu coached her through it and she could finally laugh it off. -1 to Jane Kim

And so, we arrive at you're moment of Kim: 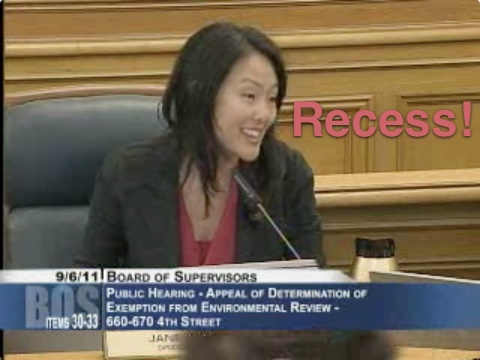 Final tally: We're excited about Ross' hair, we appreciate Wiener's towel-down legislation and we're liking where this Sharp Park fight is headed. In that back-to-school spirit everyone else seemed to just be showing up to pick up the syllabus. Except for Ms. Kim, who was still off in the desert somewhere.

See you next week, when things ought to get really prickly with Ed Lee in the house.

Trace just opened over at the W Hotel on Third Street, replacing XYZ and bringing some new design cred to the space -- it was designed by acclaimed residential architect Stanley Saitowitz, who

Michael Bauer's exceptional Between Meals feature has provided thought-provoking fodder as of late. Why, just the other day he asked readers if iPads have a place at restaurant tables. Which they do not,

—
Board Of Supervisors Weekly Power Rankings: September 5th, 2011
Share this