After the Giants drew that delightful connection between late summer baseball and the struggles of a small group of rebels fighting to defeat the evil, intergalactic empire, our friends at the Tenderloin Geographic Society have taken that metaphor and knocked it out of the park. Because weren't you curious which Giant would play Chewbacca?

You’ll forgive us for this most recent flight of fancy, but everything has been, well, too everything. That mayor thing, that government thing, that BART thing. Don’t know about you, but we think it’s high time for a retreat into a very special version of Fantasy Baseball. Star Wars Day at AT&T Park isn’t until September 4th, but why wait?

We’re ready to take on all manner of wrath (of Khan) for the parity, but it’s too good to pass up. (Note: for purposes of accessibility, we’re sticking to the filmic canon, because delving into the expanded universe is too geeky for even us. Oh, and we’re skipping Episodes 1-3 because no one cares about those.)

So, if Brian Wilson is our Han Solo then:

We don’t need to tell you Bochy’s a Jedi Master, its apparent. Romo got even furrier.

Mr. Dalton, the redoubtable editor who posts our weekly column, posited that the Wookielicious Romo could carry broken C-3PO Posey on his back. We estimate that Posey’s generally accepted adorableness and his current DL status might better match him to a downed Ewok. 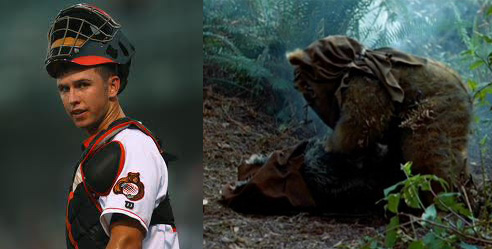 Cody Ross is a reliable ace, not unlike X-wing fighter Wedge. Both look good in orange.

Most non-fans of either franchise tend to be familiar with at least one character/player. Let’s go ahead and call it for the man-boy protagonist with the abundant mane.

When 73 years old you reach, look as good as Willie McCovey you will not, hmmm?

Since we’ve already called Romo a Wookie, let’s go ahead and break the color barrier because, really, Zito couldn’t be anyone but Lando Calrissian.

It’s not so much the smoove ‘stache of earlier this season, rather that we don’t know if Zito’s playing for the Rebel Alliance or the Dark Side.

We could go on, but will reserve your right to imagine which Giant best resembles Admiral Ackbar. 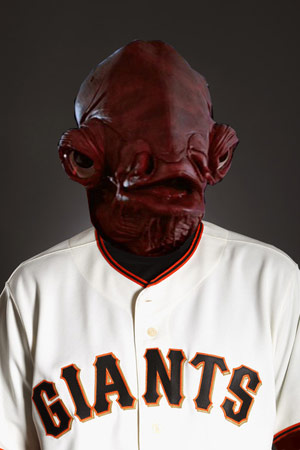 The Tenderloin Geographic Society is San Francisco's home for colloquial astronomy and intergalactic citizenship services since 2006. Stay tuned for the Tenderloin Report. If you've missed any episodes, you can always catch up here.

Now for some insider-baseball humor. David Chon, founder of Spot.Us, devised this spot.on (haHA) graphic showing how journalists view each other. Having penned many an article in our boxer briefs, as

Apple is opening their 11th Bay Area store on Saturday morning in the outskirts of Berkeley, at 1823 Fourth Street -- in the retail district adjacent to the University Ave exit on I-80.

—
Urbane Studies With The Tenderloin Geographic Society, Volume 29: May the Franchise Be With You
Share this