Yesterday's meeting was our last day in the People's Chambers for awhile. With the Board's 5-week summer recess looming the meeting only ran 3 hours long. And in typical last-day-of-school fashion, many zany hijinks ensued. Funny thing though: unlike high school, all the senior supes showed up on time. It was the freshmen who decided to cut class before the vacation: 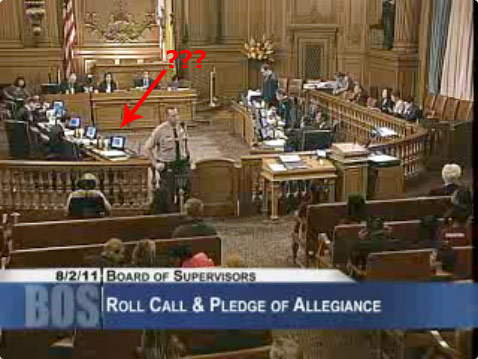 To be fair, she made it in time to vote on the consent agenda (parking spots for car sharing, a 0.5% sales tax increase and a handful of settlements and appointments), but for consistency's sake we have to ding -1 to Jane Kim right off the bat.

David Campos kind of mumbled on a bit about the BART Feeder agreement for awhile. Then an MTA rep got up to mumble a bit about the BART Feeder agreement. We were very bored until John Kennedy Jr. Supervisor Farrell stepped in to explain why the current language on the resolution was a good thing and how it puts the MTA in a good position to bargain with BART for Fast Pass and transfer reimbursement. It wasn't so much a home run as it was an RBI (get it? Mark Farrell likes baseball). +1 to Mark Farrell. 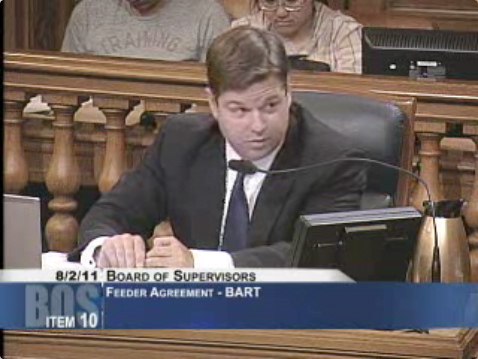 On the new Live Performance Permits, Ross Mirkarimi got up to give his own live performance (even after he already had one on the steps of City Hall). The D5 supe and candidate for Sheriff gets no points for talking so long about a piece of legislation that should have happened ages ago, but we do like his suggestion of opening every meeting with a live band. Maybe when the board is back from recess we can bring in the Cal Marching Band to get everyone excited about city government with some Deep Purple covers. +0.5 to Ross for the bright idea, we'll give you the other half if it actually happens.

Eric Mar's PetCo ban on Geary got a final vote. Supes Wiener, Chu and Elsbernd still oppose it, in case you were wondering.

The T-Mobile Settlement, which allows the telecom company to build a new facility on Taraval got the first of this week's rescinded votes. Supervisor Mirkarimi was having a sidebar conversation and accidentally voted "Yay." We're gonna have to take that half a point back. -0.5 to Ross for the voting error. We don't feel too bad about that, he can win it back with more pre-meeting live music.

On the Health Care Security ordinance, Supervisor Kim stepped in to support David Campos' legislation with big (but seated) speech about small business and protecting health care, etc. She got a couple whoops and hollers and a round of applause that echoed after Supervisor Avalos also stepped up to support it. It looked those two were going to bat in David Campos again, but Campos ended up tabling the item himself. What a let down. Have a nice summer, see you next fall Health Care Security Ordinance.

Speaking of whoops and hollers and applause, the audience cheered for the updated minimum wage enforcement measures. It was kind of like an episode of Maury. Except the audience was made up of minimum wage workers and nobody was the father! (That metaphor is flawless.)

In booze news: City Beer Store and KoKo Cocktails both got their new liquor licenses approved. Hooray, booze! Everyone gets a drink on us the next time we see them at the new Koko/Hi Lo Lounge. Which won't be until, like, forever.

The pre-recess hijinks really came out with the vote on a resolution to support or deny the Civil Grand Jury's report on the Parkmerced development. The resolution passed at first - on an easy 9-2 vote, but after five other items went by Supervisor Avalos moved to rescind the vote. Then it passed again on a 7-4 vote. So Ross Mirkarimi asked to rescind the vote a second time. The resolution still passed 6-5 on the third vote, but that whole scene was the legislative equivalent of shooting spitballs at the chalkboard and throwing paper airplanes out the window. Even President Chiu chimed in with, "it's a good thing it's almost time for recess!" We don't even know who to take points from. Just go home. All of you. We'll see you in September.

But wait - we can't go home yet, we still have like three more class periods to get through. So Avalos clowned around during introductions, showing off his Jerry Garcia memorabilia for Jerry Day: 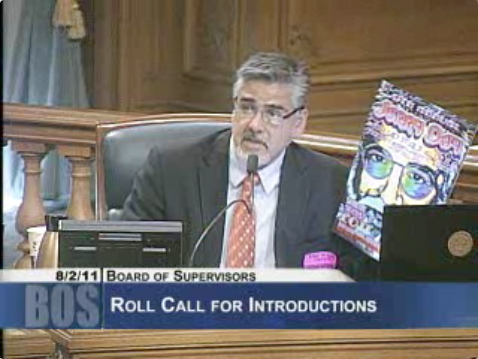 He also requested legislation to be drafted allowing bicycles inside of commerical buildings. The idea there is to prevent thefts and encourage more biking to work. Avalos, an avid bicyclist, has had three bikes stolen in the past. What a bummer! +1 to Avalos for the bike legislation (and kind of out of lost-bike sympathy).

Also, did you know City Hall has a locker room? This place sounds more like high school every day.

Eric Mar backed up Supervisor Avalos on the new bike legislation. The Richmond supe tells us, in what might be the greatest tweet we've ever received, that his green Schwinn Stingray (with banana seat!) was stolen on the first day of middle school ":(". +1 sympathy points for Eric Mar. (We, too, rode a schwinn to middle school.) Even the sadface emoticon is justified here. 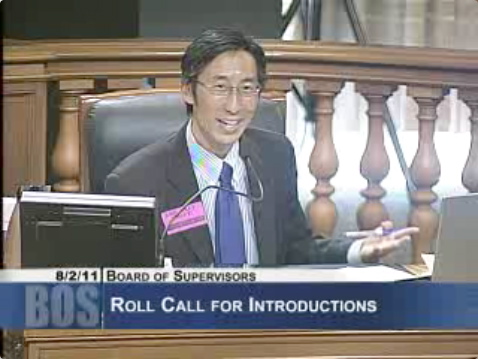 Malia Cohen has her sights set on misleading crisis pregnancy centers, (which we've mentioned before), but now she's got legislation to back it up.

Supervisor Farrell's introduction wants to extend the film rebate program - which has actually brought a lot of Hollywood to the Bay Area recently - to include reality TV shows. Apparently, some reality shows (Like Real Housewives? Please say Real Housewives!) have been hesitant to film in San Francisco because they weren't included in the deal. And all this time we thought reality shows were hesitant because that one guy put boogers in Pedro's peanut butter. Anyhow, +1 for SF-based reality shows. The Marina Shore, anyone?

Ross Mirkarimi introduced some stricter gun control legislation. He wants to ban hollow point bullets and force handgun owners to disassemble their weapons for storage or use a trigger lock. OK, sure, that all sounds great - but somehow we don't the think the people who are doing all the shooting are really registered gun owners. But what do we know, we're not the ones running for Sheriff.

After all that, we kind of feel like the teacher writing friendly yearbook notes to everybody - even the kids we didn't necessarily like, but whatever - it's recess! Everybody wins! (Except Supervisor Kim, because she was late.) So here it is, your moment of Kim: 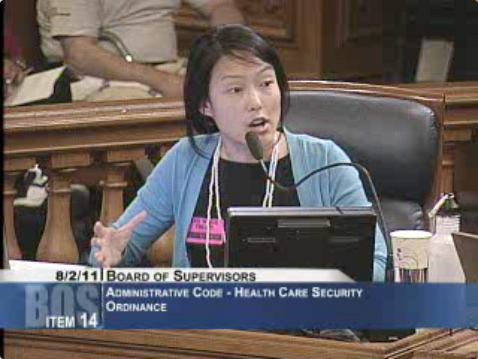 No meeting next week, but we're sure there's something we can judge our neighborhood representatives for. In the meantime: Have a nice trip! See you in the Fall!

Jane Kim, where are you?

Gather round kids. Grandpa's got a story about three Bay Area alt-weeklies and what they decided to report on this week, at the height of this long, misty, fog-gray summer. Don't worry, it

Breastfeeding, Blow Drying and Slutwalking - it's Your Week in Lady News [SFAppeal] Harry Denton's Starlite Room in the Sir Francis Drake is getting a makeover and Joel Teitelbaum, the man behind the

—
Board of Supervisors Weekly Power Rankings for Wednesday, August 3, 2011
Share this