Getting right down to the big issues this week (because SFGovTV's footage of yesterday's meeting inexplicably cuts off the first 45 minutes of administrative items), let's talk about those Muni bus wraps. The vote landed at 6-5 in favor of the additional bus ads, with those five negative votes coming from the board's more progressive side (with prog-mod Wiener and milquetoast Mar in there for good measure). Wiener's opposition was almost understandable, actually: wrapping his beloved J-Church in an advertisement would be the first step on a slippery slope that ends in putting a billboard in Dolores Park. On the other hand, that's a massive missed opportunity to sell prime ad space to valuable alcohol advertisers right next to one of the most consistently packed outdoor drinking venues in the city. Just think, we could have had the J-Church Silver Bullet

Avalos, Campos and Mirkarimi were also frustratingly well-intentioned. Their opposition was based on a need to maintain a pleasant experience on Muni, which is laughable when you think about how unpleasant Muni is 99% of the time. Still, you get the impression they're doing this for you, the humble Muni rider who just wouldn't be able to stand riding on a bus with graphics on the window. It's a nice thought, avoiding more advertisements around the city, but in the long run let's get Muni of that debt hole while there are still buses to actually ride on. +1 to Sean Elsbernd for railroading everybody with the logic train.

Then these two got all hung up on some language with the Local Hire ordinance: 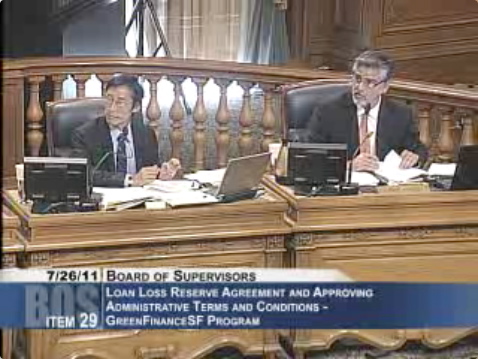 Malia Cohen must have pulled some strings at SFGovTV: When the Board went to recess so the Mayor could sign the City Budget, we were treated to a delightful video of the groundbreaking ceremony at the Bayview Branch Library last week. in the clip, Malia was glowing as usual, so +1 for Cohen and whoever in her office baked cookies for the editors at SFGovTV. 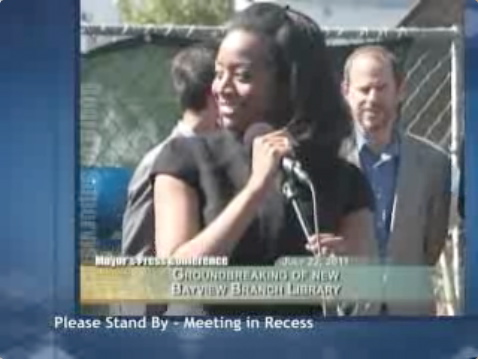 John Avalos missed the vote on T-Mobile's settlement, so it zipped right through before he decided he was opposed to the conditional use that will allow the cellphone company to build a facility on Taraval Street. That forced us to go through this whole thing where President Chiu had to rescind the vote and bring the item back up, giving Campos some time to decide he's now suddenly against the settlement as well. Poor form, gentleman. -1 to Avalos for missing a vote that he felt he had a stake in. And -1 to Campos, who ended up looking like he is unable to formulate an opinion of his own.

Scott Wiener had the most insightful comment of the day after Supervisor Mirkarimi moved to continue the new entertainment permits item to next week: "At the very last minute, as is often the case in San Francisco, those who are sophisticated about trying to kill things, wait until the end and then raise an objection." +1 to Wiener for calling it like it is. Unfortunately, the item was still continued to next week, which means it won't get passed until after Labor Day (at the earliest) due to the August recess.

Still calling it straight, Scott Wiener showed way more restraint than we would have on the Geary street PetCo ban. By amending the planning code to specifically ban chain pet stores on Geary and Clement street, Mar isn't protecting small businesses, he's just building up an incredibly convoluted planning code with quirky restrictions in every neighborhood. As the D8 Supe pointed out, why not let the Planning Commission figure these things out? You know, because that's they're job. Another +1 for Wiener, the man can object with a smile: 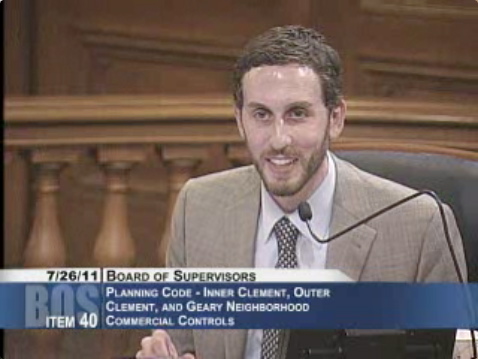 After public comment there was a lengthy chat on Credit Card fees in cabs. You know what? Just hail us when that discussion is over, thanks.

Due to the aforementioned SFGovTV technical difficulties, you moment of Kim has been cancelled this week. Instead, here's your moment of Chu, because she looks lovely in pearls and purple: 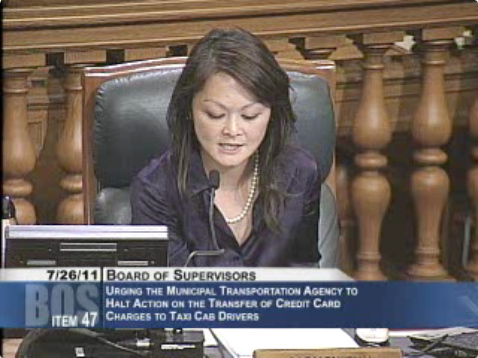 At the end of the day, Avalos sadly drops back in to the negative, Malia Cohen continues to work her way up the rankings (and in to our hearts) and Scott Wiener has his eyes on Sean Elsbernd's top spot.

"President Chiu, can we continue this until later in the meeting?"

Matt Cain fares better in Philly than Zito did the other night and we end up with a very Giants-like 2-1 win. Brian Wilson Savewatch 2011 hits 32 on the season. [MLB.com]

Alex Smith: We've Still Got Him to Kick Around [SF Weekly] Kindler, Gentler Wrap-Ads Coming to Muni -- But To Only 15 Buses, Trains [SF Appeal] Will Petco Just Roll Over? [Curbed] FOX

—
Board of Supervisors Weekly Power Rankings for Wednesday, July 27, 2011
Share this